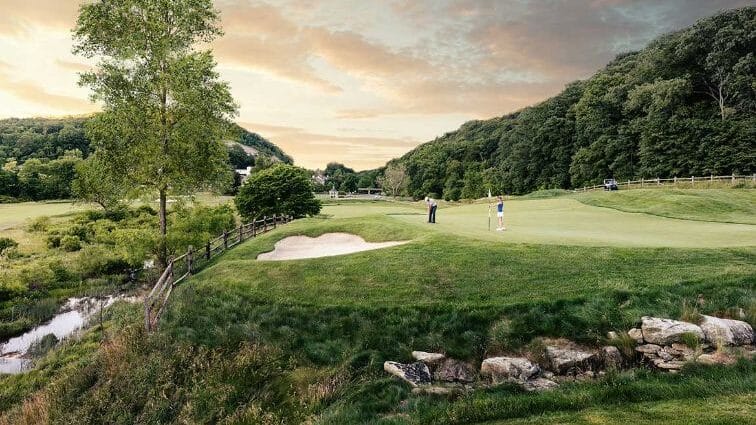 For many, golf is not just how well you play but where you’ve played. Talk to any avid golfer, and they’ll ask about the courses you've teed off at. There are certainly no shortages of excellent golf courses in America, but these courses steeped in the game’s history should be on every player’s bucket list.

You don’t need to make the record books at these historic golf courses played by U.S. Presidents, world leaders, celebrities, and some of the best golfers that ever lived. Instead, just enjoy a golf getaway at one of these 25 Historic Hotels of America that feature stunning courses designed by some of the most legendary architects of the game.

The oldest golf tee in continuous use in the United States is at the Omni Homestead Resort in Virginia, built in 1766. Initially only a 6-hole course, but later expanded to a full 18 by famous golf course designer Donald Ross, it has seen its share of historical figures. Presidents William McKinley, William Howard Taft, and Dwight D. Eisenhower have all teed off at this historic course.

Deemed the jewel of southern Arizona golf courses, Tubac has its fair share of history. Bing Crosby invested in the course, and Robert “Red” Lawrence, a founding member of the American Society of Golf Couse Architects, designed it.  The course has three nine-hole sections, and players can choose any two golf courses creating three custom 18-hole outings.

Opened in 1906, the course at Woodstock is the oldest public course in Vermont. Redesigned by architect Robert Trent Jones in the early 1960s, the course sits in the perfect Vermont landscape for a day out in nature. The full course has a unique par-70 making it a new experience for all avid golfers.

Opening in 1895, the Bedford course is one of the oldest in the United States. Starting as one of the more extensive golf courses in the country, the 18-holes at Bedford have been designed by the most accomplished architects in the sport's history. In 2007, the course was updated to focus on more of its Golden Age architectural features paying homage to the architects who helped shape the game.

The Grand Hotel Golf Resort, built in 1847, offers two complete 18-hole golf courses and draws  Presidents, royalty, movie stars, and sports legends. In 2005, the courses were renovated to fit the modern game while keeping the original feel and playability for all levels.  Add this classic golf destination to your next Gulf Coast vacation.

Legendary golf course architect Donald Ross designed this course with the game of golf and the surrounding landscape in mind. Residing on the mainland of Lake George, this course is for advanced and championship golfers but has views anyone who stays at the resort can fall in love with.

Like The Sagamore course, the Basin Harbor golf course uses the surrounding landscape to make for an unforgettable 18-holes. Redesigned several times over 100 years, including improvements by Cornish, it still hasn’t lost its Golden Age of Golf feel.

Once limited to America’s wealthiest families, the courses on Jekyll Island are now open to all golfing enthusiasts. They have hosted notable golfers, but these courses are also well known as a testing ground for professional players of the USGA, and the first place steel golf clubs were used.

Made up of the Grand Nine and the Woods Nine, the courses at Grand Hotel are designed for an unforgettable round of golf and Lake Michigan views.  Known for unique offerings like a horse-drawn carriage ride between nines, it was another favorite course of President Gerald Ford.

Another course known equally for its challenging play and fantastic scenery, this course meticulously preserves the surrounding environment, drawing Babe Ruth, Joe DiMaggio, Bob Hope, and other celebrities. Unlike the other courses, these holes have a forest as their backdrop, earning them a place on any golfer’s bucket list.

Pinehurst Resort consists of an astounding nine championship golf courses, hosting the PGA Championship, Ryder Cup, and the U.S. Open. The most famous being Pinehurst No. 2, designed by Donald Ross and the home of more championship tournaments than any other course in the United States.

One of the oldest courses in the country, the Mount Pleasant course, first opened in 1895. The second course at Omni Mount Washington Resort was another Donald Ross masterpiece finished in 1915. While recently redesigned, it still reflects the original vision Ross had for the course.

Devereux Emmet designed over 150 golf courses, but the Otesaga Resort course may be one of his finest. Set on the southern shore of Lake Otsego, the course is another example of how a golf course can fit in perfectly with its surroundings. Each year, the course hosts a Hall of a Fame tournament during the Baseball Hall of Fame inductions, attracting some of baseball’s biggest stars to take another kind of swing.

Another Donald Ross classic course, this course takes players through the Blue Ridge Mountains with stunning views. Opened in 1899, it had its share of pros and presidents, including most recently Barack Obama, take on this challenging course amidst a trendy vacation destination.

Located in Colorado Springs and surrounded by the Rocky Mountains, Ross himself said this course at the Broadmoor Resort was his best work. The Broadmoor, known for elevated service, restaurants, and high-end hotel rooms, also wins the highest elevation for a golf course award.

The creators of the Ojai Valley course held nothing back, and it shows. Completed in 1923, the course was hailed as a marvel of golfing architecture and was immediately deemed one of the first great courses in Southern California. The course has hosted seven Senior PGA events, and its proximity to Los Angeles and luxury resort setting make it a celebrity favorite.

The history of St. Petersburg Resort’s course is traced back to a 1920’s bet. According to popular lore, Walter Hagen lost a wager to wealthy businessman Aymer Vinoy over the power of his golf drive.  Hogan lost a staggering $170,000, which Vinoy then used to create this masterpiece. Hogan, the first golfer to make a million dollars, could spare the wager, and thanks to his loss, players now have another stunning golf course to enjoy.

At 214 below sea level, this Death Valley golf course has the lowest elevation despite its desert location. Designed with the scenery in mind, it showcases incredible views of the valley and surrounding mountains. In addition, the Inn at Death Valley’s Pro Shop has the bragging rights of selling future Hall of Fame golfer Phil Mickelson his first pair of clubs.

Residing at the foot of the Sonoma Mountain Range in California’s stunning wine country, the Fairmont course is one of several Sam Whiting-designed golf courses still playable today. Boasting three par threes of over 200 yards each, the course will test the skills of even the most talented golfer.

Known for designing magnificent golf courses, William Park Bell did his best work on The Ranch Course. Working with the surrounding Santa Ynez River and Santa Ynez mountains in another stunning portion of California wine country, the course is yet another example of the spectacular scenery on a golf course. Most notably, the number 5 hole touts a view of Solvang that makes it worth the trip alone.

The Goodyear Tire and Rubber Company built the resort in 1929 as a vacation spot for its executives outside Phoenix. Over the years, three new golf courses, each with its own style and feel, have been added with designs by Trent Jones, Sr., and Robert “Red” Lawrence.

Since its founding, the Hershey Country Club, near the iconic HersheyPark, has hosted its fair share of national tournaments. Arnold Palmer, Jan Stevenson, and Governor Tom Ridge have all tested their skills on this course. In addition, the 23rd PGA Championship where Byron Nelson gathered another sweet victory towards his 11-straight PGA tournament wins took place here.

Located on the Kohala Coast in Hawaii, the course’s surroundings and ancient lava fields are worth visiting alone.  Arnold Palmer, Jack Nicklaus, and Gary Player were the first to play the course in 1964, and it still draws celebrities and professional players today.  Seen as a bucket list course for all golfers, its signature par-three over-the-ocean hole #3 is one of the most challenging and awe-inspiring holes in the world.

Jeff is a fan of all things finance. When he's not out there changing the world with his blog, you can find him on a run, a Mets game, or just playing around with his kids.

You’ve Got the Power When It Comes to Home Energy

Your Guide to the Best Summer Ever