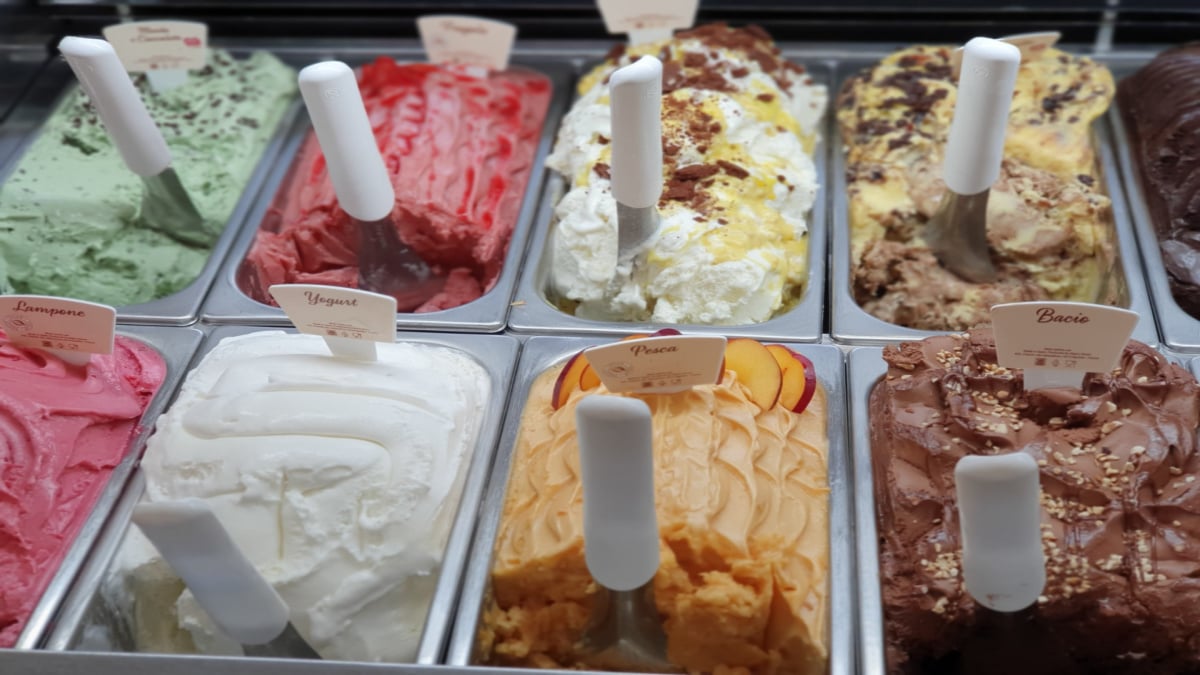 It may be the cold, sweet taste, or fond memories. Some may cite the Institute of Psychiatry in London research showing that ice cream zaps the pleasure centers in people’s brains. This pleasure gives them the same happy tingle when listening to albums or unwrapping Christmas presents.

Whatever the reason, ice cream is an important staple found in American daily lives.

And with July being one of the hottest summer months and slurping ice cream being one of the ways Americans choose to cool off – it’s no surprise July is National Ice Cream Month. “It enjoys a reputation as the perfect dessert and snack food,” read the proclamation of former President Ronald Reagan when he signed it into law on July 9, 1984.

But the road to becoming the well-known American dessert has not always been smooth. There have been some Rocky Roads too. (Pun intended.) Twists, turns, and delectable surprises gave us the mouthwatering treat.

Americans might not have had ice cream if it weren’t for China’s King Tang of the Shang Dynasty, sometime between 618-97 A.D. A special BBC section on ice cream discussed how Tang popularized the prototype of the icy dish.

The king ordered 94 ice men to help make him one of his favorite dishes – a delicacy, milky rice pudding made of a combination of buffalo milk, flour, and camphor. These men had only one job – racing up and down mountains, bringing the crucial ice for the recipe.

The Chinese were not the only ones who incorporated slave work when making cold treats. According to an online almanac timeline, around 54-68 A.D., Roman emperors, such as the infamous Emperor Nero, sent his slaves up high mountains to bring back snow to help chill their drinks and desserts.

Arabs also contributed to the evolution of the frozen confection. In his article for Lifegate, “Ice cream, a Short History. From Ancient Roman Snow to Love With a Heart of Cream,” Stefano Carnazzi wrote how the Arabs started adding fruit, like cherries, quinces, and pomegranates, to their Sorbet or Sorbetto drinks, which came from the Arabic word, “Sharab,” meaning to drink.

The BBC pointed out the ice cream Americans know today appeared in the late 17th Century. Mr. Antonio Latini, dubbed the ice cream inventor, introduced Italians to a novel dish – the “milk sorbet.” But making the sorbet was no easy feat, especially when sugar was so expensive and refrigeration was almost obsolete. Only those with big money bins could afford the treat.

That’s why, when Europeans, like the English, became fed up with life or were persecuted for their religion, and they left the continent, they couldn’t take ice cream with them. The first colonists had little money.

Arriving to the United States

But, they didn’t have to scream for ice cream for long. Later, after America’s birth, the U.S.’s top politicians, who traveled to Europe, brought back the ice cream recipes with them.

Laura Weiss, a famous food historian, knows all about George Washington’s sweet tooth. In her book, Ice Cream: A Global History, she wrote how the president enjoyed serving ice cream to his guests. When he lived on Mount Vernon, the Potomac River was his source of ice for his guilty pleasure. Dairy cows provided the milk in the Spring.

But Washington and his wife Martha carefully watched the portions they served to their high-class guests. They dished out their homemade ice cream in tiny, porcelain French cups which could hold no more than two ounces. During one summer, the Revolutionary leader spent $200 just on ice cream. He may have had an ice cream obsession.

Award-winning journalist and bioethicist Elizabeth Yuko added that Thomas Jefferson was also an ice cream fan. He may as well have penned the Declaration while spooning from a cold bowl of ice cream beside him.

In The History of Ice Cream, One of the World’s Oldest Desserts, Yuko wrote that Jefferson’s French-trained slave, Chef James Hemings; French butler Adrien Petit, and French Chef Honoré Julien helped make the ice cream for the Jefferson estate. They also helped serve up the gateau in the White House.

But that’s not all of Jefferson’s household contributions. Enslaved Chef James Hemings stirred up the first vanilla-flavored ice cream – the kind that is as American as apple pie and what many Americans taste when eating ice cream scooped out on top of their apple pies, as Yuko noted.

By then, ice cream was well on its way to becoming a daily staple for Americans. In his piece, “How Ice Cream Became the Ultimate American Comfort Food,” Matt Siegal wrote about how the popularity of ice cream rose in the United States. By 1800 though, the masses could enjoy ice cream too due to the invention of “insulated ice houses” – the early refrigerator. The American government began welcoming immigrants who arrived through Ellis Island with the tasty treat.

An Italian may have invented ice cream, but an American, Black man, Augustus Jackson, created the modern method of manufacturing ice cream. For this reason, Yuko wrote that people dubbed him the “Father of Ice Cream.”

Sometime between 1817 and 1837, Jackson cooked up meals in the White House, and he learned how to make ice cream there. When he left, he returned to his home city of Philadelphia, where he opened his confectionery store and catering business – catering to all Philadelphians.

But what made ice cream really start trending was Prohibition. Siegal outlined the history when American lawmakers outlawed alcohol. So, early breweries like Anheuser-Busch and Yuengling started making ice cream instead of alcohol. People could drown their sorrows in alcohol – why not ice cream? Besides, ice cream has an extra sweet flavor.

By 1859, Carnazzi formulated ice cream was a worldwide phenomenon – thanks to Nancy Johnson and her patented mechanical ice cream-making machine. Her device quickened the process of churning ice cream, making it easier to mass-produce the dessert. Johnson received the patent in 1843. Her patent number was 3254.

According to the International Association of Ice Cream Vendors, in 1859, the country had produced 4,000 gallons of ice cream. Ice cream was no longer a delicacy for the rich.

And Europeans realized something too. Ice cream aficionado and author of Of Sugar and Snow: A History of American Ice Cream Making, Jeri Quinzio wrote America was the “land of ice cream.”

Johnson may have patented the ice cream, but Jacob Fussell was the first to mass-produce ice cream. The Baltimore man realized he had a surplus of cream during the summer months. So, he thought, why not turn that cream into ice cream.

Americans wanted more ice cream during the summer. Carnazzi mentioned Fussell opened his first factory in Pennsylvania in 1851, moved the factory to Baltimore, and began opening up more factories along the Eastern Coast.

Sodas, Cones, and Sundays or Sundaes?

But, the ice cream adventure was not over. Weiss illustrated how the path of fountain invention crossed paths with ice cream. Earlier in Europe, in 1770, Swedish chemist Torbern Bergman and English scientist Joseph Priestly discovered a way to create bubbly water through carbonation. Then, in 1832, another English man, John Matthews, immigrated to New York and opened up a business that sold machines, like fountains, that pushed out water.

Weiss then continued describing the influx of ice cream soda fountains. At the end of the Civil War, soda fountains dotted the American landscape. “Old Ben,” a freed slave who used to work for Matthews, realized that combining these machines with bubbly soda could create something phenomenal. So he opened a soda-water-dispensing business in New York City at 55 Gold Street.

Then, Bostonian A.D. Puffer, Philadelphian John Lippincott, and another Bostonian, James W. Tufts, piggy-backpacked on” Old Ben’s” work and started making different varieties of the machine – from marble cottages to copper sphinxes that sat on top of their counters. Hence, the invention of soda fountains.

The frosting on ice cream history is the happy-accident invention of the cone. In a local National Public Radio broadcast, Roald Tweet told the story of the ice cream cone invention. Syrian Ernest Hamwi sold his waffle cookies, which he called “Zalabias,” at the St. Louis World’s Fair in 1904, and next to him was an ice cream vendor.

Hamwi came up with the idea to use his waffle cones as plates for the ice cream and to sell the combo together. It was a novel idea and the start of a partnership between Hamwi and Heckle. Hamwi sold his crunch invention to Heckle and helped him open the Cornucopia Waffle Company.

Another important innovation is the sundae. Food historians don’t know how the sundae came into existence – but there are theories. BBC laid out one of the most popular theories – religious laws helped bring about the new ice cream development. Religious laws banned specific activities on Sabbath Sunday, such as not selling alcohol.

So, Americans couldn’t buy ice cream soda. The Americans begged for a replacement, and the druggists responded by creating the “Sundae,” which replaced the soda with syrup. The new concoction was initially called a “Sunday,” perhaps as a response to the religious laws that indirectly helped create the dish, but out of respect, the spelling was changed to “sundae.”

Today, ice cream is found everywhere – in ice cream trucks that stroll through neighborhoods, in the freezer aisle in grocery stores, at baseball games, and in many dining and fast food establishments. They come in cones, sundaes, and sandwiches. And that is how Americans cemented ice cream as a part of U.S. history.

Problematic Tropes and Harmful Stereotypes in the Harry Potter Series