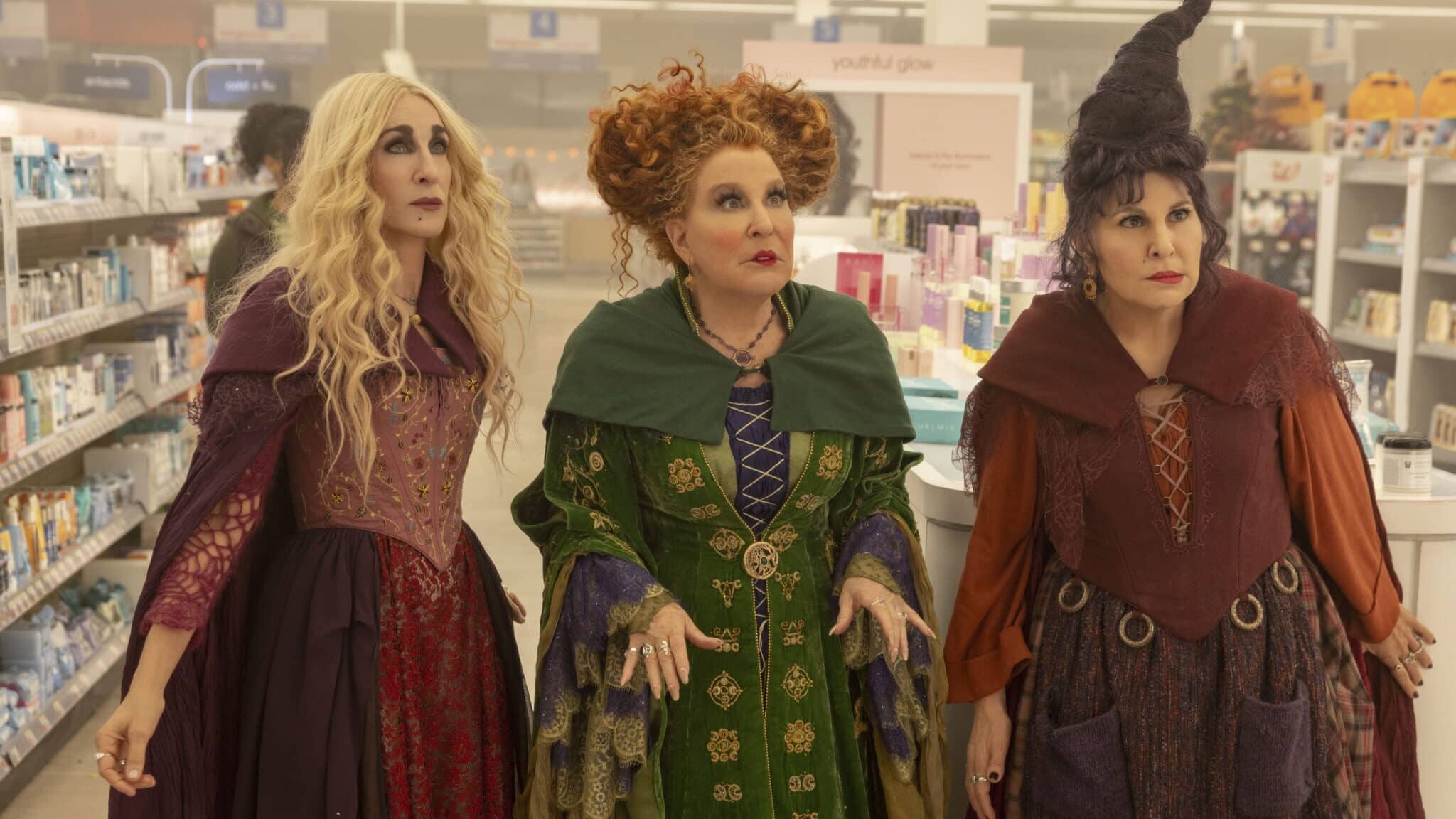 Mama, don’t let your babies grow up to be witches. At least not in this movie.

Shameless cash grabs don’t need to be as mood-killing as Hocus Pocus 2. Just because a movie has no reason to exist doesn’t mean it can’t have a long life thrilling audiences. Take the sheer fun of some of Disney’s most openly corporate offerings, namely The Lego Movie and Toy Story 4.

Optimism can be tough however, since for every enjoyable classic that spins gold from big business, there are so many more throwaway Disney sequels that they're practically a genre unto themselves.

Times have changed, needless to say, and awful Disney continuations are no longer shuffled off their non-theatrical mortal coils to VHS or even DVD, but unleashed with heavy marketing promotion to wide audiences thanks to streaming. And in an age of the sequel, the reboot, the prequels, and the sequels and spin-offs to the sequels, reboots, and prequels, Hocus Pocus 2 stands out in terms of sheer awfulness.

The 1993 original has become such a beloved Halloween fixture that it’s easy to forget it was a critical and financial failure, one that the House of Mouse actually lost money on. Much like Practical Magic, another 90’s fan favorite with a dismal RT rating and low returns, it owes its fandom to audiences discovering it after its initial release. Both films effectively and astutely tapped into the very justifiable fears of their audience, which in the latter’s case involved a history of abuse, violence, and the terror of both being passed on to the next generation.

For all of the kid-friendly trappings, Hocus Pocus got to the dark heart of childhood. The lack of control over your life, the disbelief on the part of even loving adults when you reach out for help, and the terror that’s as old as fairy tales themselves, that of the ferocious monsters lurking in the dark, and their hungry appetites…these tend to linger long after puberty has had its way with us.

Unfortunately, Hocus Pocus 2 isn’t just uninterested in children’s fears, it caters to adult anxieties about them, and that’s usually all about what the kids can’t handle. So when the teenage Becca (Whitney Peak) and Izzy (Belissa Escobedo) accidentally summon the Sanderson Sisters, the gloriously reunited trio of Bette Midler, Sarah Jessica Parker, and Kathy Najimy, they arrive in a world that’s extremely invested in sanding down every one of their rough edges.

And as is typical for a movie that’s ruled by fear rather than fueled by it, authority must be catered to. But gently, since we’re also living in the age of the Instagram witch. So the Sisters get a somewhat sympathetic backstory while being depicted as the very evil the patriarchy believes them to be, and robs them of their ambition to murder children because they become focused on doing away with the town’s mayor (Tony Hale), a direct descendant of a self-righteous reverend who attempted to separate the Sandersons as children.

When it’s not calling a man who’s benefited from over 300 years of inherited power the nicest man alive and assuring us times have changed, Hocus Pocus 2 is using precedents from its original for harmless fun, and incorporating elements of today’s beauty culture for laughs so lazy that the movie can’t even be bothered to make use of local culture, since the first place budding witch Becca introduces the sisters to is the Walgreens beauty section. And the zombie Billy (Doug Jones), whose undead state was part of his punishment for his infidelity? It turns out he’s the victim since he was never Winnie’s lover and as he put it, “She sullied my name for eternity.” I hate it when that happens.

Clearly Becca and her friends are not going to take the ParaNorman route by becoming a foil to the villainous trio and demonstrating how to find strength in overcoming a horrific past by embracing love and forgiveness, the latter of which is a very real struggle for Gen Z. By not placing anyone in real danger, it robs the iconic witches of resembling anything even close to a threat, and Winnie is made into a kind of anti-heroine whose sisters mean the world to her, not a power-hungry villain who will sacrifice all in her pursuit of power, beauty, and youth.

Much like Pinocchio, it’s hard to blame parents for being uncomfortable with a family film, in this case one where children were in danger of having their very life sucked out of them, and any other child who attempted to intervene ran the risk of being transformed into a feline for centuries. But it’s an extremely wrongheaded choice to lay the blame for their return at the feet of a Black man (Sam Richardson) who believes they were merely misunderstood and ahead of their time, and not even the charismatic power of its iconic trio can compensate for that.

There are also far better ways to cope with anxiety than by becoming as obsessed with not rocking the boat as Hocus Pocus 2. If the only nostalgia it provokes is that of the bargain bin, then a whole lot has gone wrong.