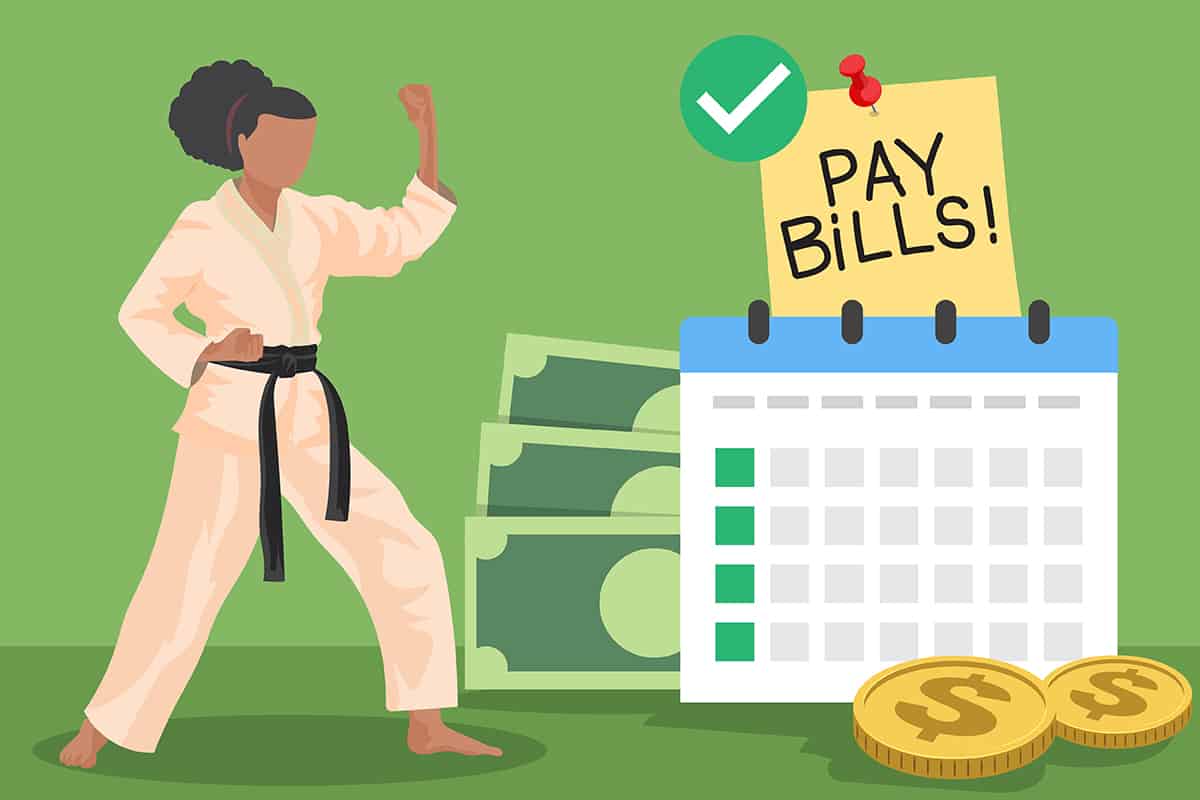 Share on Twitter Share on Facebook Share on LinkedIn Share on Pinterest
If you’re trying to save as much money as possible, you probably don’t want to add extracurricular activities to your schedule, especially those you have to pay for. I have spent a good amount of money on martial arts and haven’t earned anything yet.
I would agree that doing math makes martial arts look like a bad financial move. Things can add up with the cost of classes, the uniform, and the gas to drive there. I get benefits from martial arts that play a more important role than math, though.

Psychology plays a more important role in your personal finances than math does. You can get all the numbers worked out, but if you can’t get your brain to cooperate, there’s no point in doing the math.
Martial arts have great psychological benefits. One of the most important ones, I would say, is confidence. There’s a fine line between confidence and arrogance, but you need the confidence to get things done. If you don’t have confidence, you aren’t going to grow much as a person. Martial arts is a great confidence booster because you can make a lot of progress in a short amount of time. With a little bit of confidence, you can completely change the trajectory of your life for the better.

This is another great psychological benefit of martial arts. If I couldn’t restrain myself from purchasing whatever I wanted, I wouldn’t have any money saved. Discipline is the voice in your head that tells you no when you don’t need to do something. It’s also the voice of encouragement when you’re having a hard time continuing to do the beneficial things.
Building discipline is great for any area of life. Having control over your actions gives you the ability to dictate your future. I'm not the most disciplined person, but martial arts helps me improve. It isn’t easy to show up each week, knowing that you’re going to put your body through pain.

To have a good class, I have to empty my mind and focus on what I’m doing now. It’s hard to be productive at anything if you’re thinking about 5 other things at the same time. Martial arts have helped me develop a pattern of focusing that I can apply to any other area in my life.
The more you focus on something, the more results you’re going to see. I try to keep a healthy level of focus when thinking about money because I don’t want to become obsessed with it. Having a goal of reaching a million-dollar net worth requires me to focus on money quite a bit, though. Cutting distractions is a great way to spend less time on what you are working on.

Not only has martial arts helped me be less fearful of getting attacked by someone, but I’d also say it’s helped me eliminate fear in most areas of my life. Eliminating fear goes in hand with having more confidence. You might feel confident you can do something, and then a thought comes through your head, and you start to feel fear. If you can eliminate that fear, you’ll be able to break through barriers you never dreamed of.
We’re all going to die. Sorry, I didn’t mean to get grim there, but it’s true. While having some fear can be healthy, most things we fear in life aren’t justified. Most people on their deathbeds don’t regret the things they tried, but the things they didn’t.
Something a lot of people fear with their finances is the stock market crashing. This is a terrible thing to fear because the best investment strategy is to leave your money in the market, no matter how low it goes. The market has always recovered when it crashes. The people that have been able to eliminate their fears and stay invested have seen the best returns.

The belt system was set up to motivate people to keep at it and look forward to receiving their next belt. Martial arts schools are great at setting goals for you to achieve. By creating a goal, you define what you want, which helps you achieve it.
Much like my belt achievements in martial arts, I’ve got goals set up in my life that I’m aiming for. Since hitting a million-dollar net worth is a huge goal, I’ve got smaller goals in place to make me feel like I’ve accomplished something along the way. My next money goal is to hit a net worth of $100k, and I’m almost there.

The idea of competition seems to be getting less popular, but it’s still a big part of life. Pretty much everywhere you look, you’re competing with someone else. You don’t have to be super competitive, but you’re going to have to compete to get ahead in life, so it’s good to be able to.
Martial arts is a great way to develop some competitiveness. When I’m sparing, if I don’t compete, I will get kicked in the face and possibly get knocked out. I actually did get knocked out when I tested for my red belt, which wasn’t enjoyable. Competition is great because you’ll lose at some point, and you learn a lot when you lose.

This is probably going to be how martial arts impact my finances in the biggest way. There’s no telling how much money I might save by avoiding medical bills if I continue to train into old age and stay as healthy as I can. I need to get better about what I eat, but I’d already been much worse off regarding my health if I didn't train each week.
One of the best ways martial arts impacts your health is by keeping you flexible. We stretch for several minutes each class, and it does wonders for my body. I need to stretch more at home but doing it twice a week is more than not.

Last but not least, martial arts teaches me new skills that I could use to make money. If I wanted to, I could open my own school, become a bodyguard, trying to become a stunt double on movies, or even create my own martial arts instructional content and monetize it on the internet. There are loads of ways I could make money using the skills I’ve learned in martial arts.
Not only could I make money from the skills I’ve learned, but I can also better protect myself from someone trying to rob me.

Could You Get All These Benefits for Free?

Most of the benefits I’ve listed are things you could gain by doing other things besides martial arts. You can even do martial arts for free if you try hard enough. There are a lot of videos online that teach most of what I’ve learned from my school. I like the class's social aspect, though, and you cannot spar with anyone in real life if you’re watching videos.
It may not be worth it to you to go sign up for martial arts and pay $100 a month for it. Obviously, I’d only suggest that if you were already thinking about doing it. I do feel like martial arts is a great thing to get into, though.

How to Link Amazon Prime to Twitch