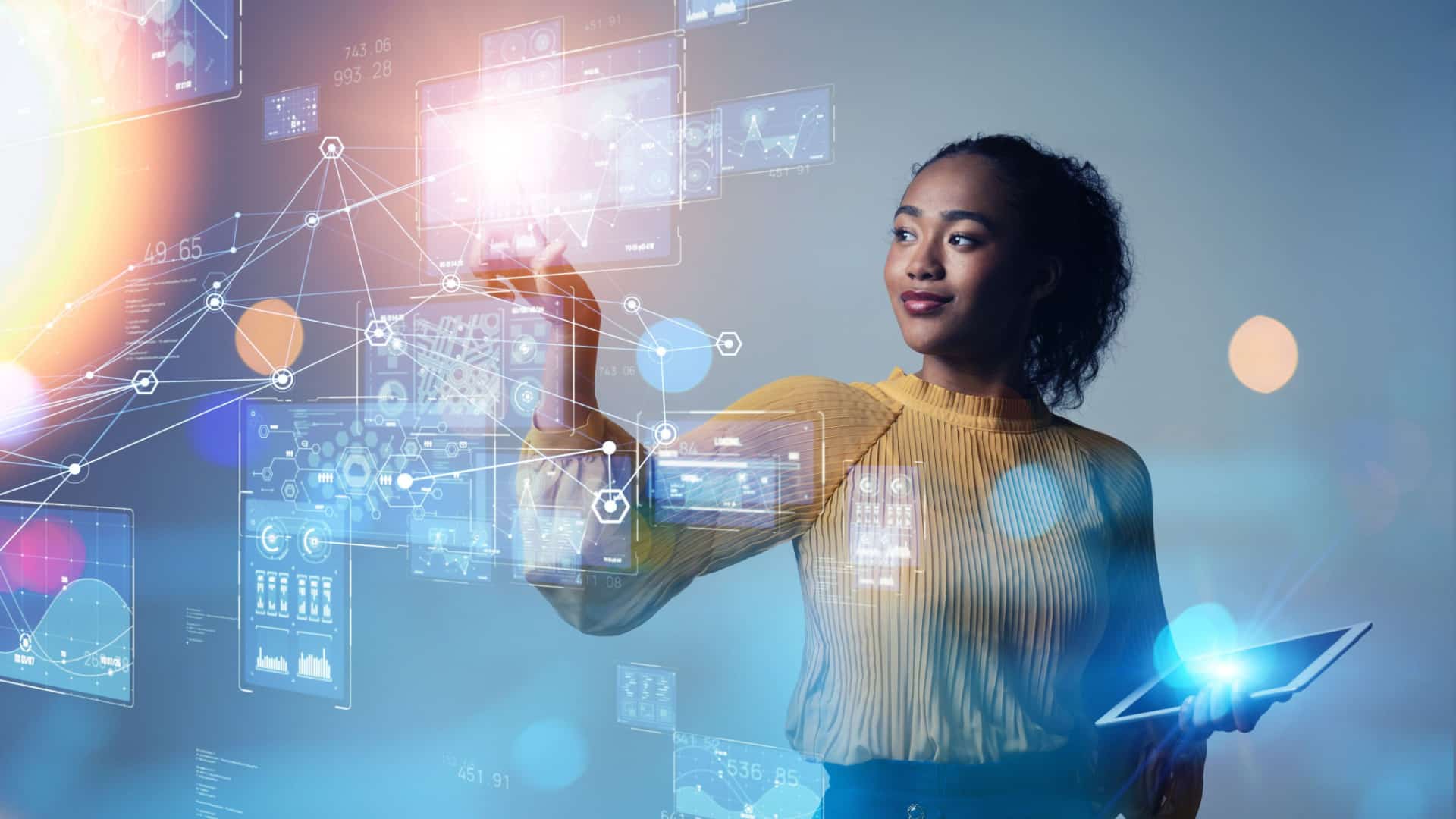 Many people may have noticed the unusual quantity of surreal and photorealistic images flooding the internet since last summer. This phenomenon is not due to an explosion in painterly talent but rather text-to-image generators, a new artificial intelligence (AI) technology set to reshape many industries.

These AIs let users type in a text prompt of what they want to see. People specify mediums, styles, and content, and the image comes out within a few minutes. While the pictures tend to emerge imperfectly formed and require multiple prompt reworkings, the results are striking.

Hardcore users are already starting to generate revenue from their creations through various means, from merchandise to comics, to non-fungible tokens (NFTs).

Let’s look at the most commonly used text-to-image generators and how you can use them for a side hustle.

The field of AI art is changing very rapidly, with new services coming on the market at an almost frightening clip. However, a few essential tools stand out, and everyone involved in the new field is experimenting with them.

All of the services mentioned in this article grant broad commercial licenses to their users. However, legal battles may yet loom over copyrighted materials in the datasets used to train the AI models. Further questions about copyrighting your own AI artwork are also largely unresolved.

The first AI art to pop up on most people’s radars came from DALL-E 2, a text-to-image generator by OpenAI. It was announced in April this year and became open to the general public in late September.

DALL-E 2 may be the most sophisticated for photorealistic images among its peers. On top of this, it has an inpainting feature, which allows for editing images based on text descriptions. At the same time, outpainting expands an image with stylistic consistency beyond its original borders.

However, tinkering around with DALL-E 2 can be expensive, and it’s best to use it sparingly until it releases an unlimited subscription model. New users are given 50 free credits upon registration and an additional 15 monthly. It costs $15 for 115 credits. Each credit generates four variations on the text prompt.

Stable Diffusion is the most flexible but least user-friendly of the major text-to-image generators on the market. Released by StabilityAI in late August, Stable Diffusion can do inpainting, outpainting, and image-to-image translations, meaning it can take an existing image and transform its style.

Stable Diffusion’s model is open-source, departing from the proprietary models of rivals DALL-E 2 and Midjourney. That means it’s possible to run it in an unlimited capacity locally and also get around the NSFW filters – especially useful for anyone creating narrative art, which often includes sex and violence.

StabilityAI also runs a cloud service called DreamStudio that makes the AI easy to use, though perhaps less so than DALL-E 2 and Midjourney. The company gives new users 200 free credits; additional credits cost $1.18 for 100. One credit is not necessarily equal to one image, depending on the settings.

Released in open beta in July, Midjourney has become the tool of choice for many making their first forays into AI art. It only operates through Discord at the moment, but plans for a web-based version are in the works. You can invite the Midjourney bot into your Discord server and generate away.

Midjourney does not yet have inpainting or outpainting, but it has a novel remix feature that allows you to re-engineer a prompt after seeing the results. The remixing, combined with the upscale and version features – which enable you to mutate an image further – means it’s possible to keep evolving your creations until you get something closer to what you want.

Midjourney offers its users 25 image generations as a trial, and then a tiered membership structure is available afterward. The basic subscription costs $10 and gives you 200 generations, which go surprisingly quickly. An unlimited plan costs $30, though you will have to pay an additional $20 if you wish to keep your output from appearing in the public Discord channels.

Essentially, people serious about commercializing their Midjourney artwork will spend $50 a month. Still, it’s currently the only of these AIs available with an unlimited plan outside of running Stable Diffusion locally.

Monetizing AI art is a new development. With the exception of NFTs, most creators are still in the very early stages of working out their business models. That said, their audiences are snowballing, and there is likely to be a booming market for human-AI collaborations before the robots fully take over.

Steve Boardman, an AI artist and YouTuber who goes by the handle ErotemeArt, told Wealth of Geeks that he sees the new technology as creating a three-tiered structure for creators looking to monetize. Each tier has potential for earnings, but the better outcomes are weighted towards those who work on the second and third tiers.

According to Boardman, the first tier would be images, which are about to resemble a commodity or raw material, since they are now so easy to produce. The second tier would be using images for larger projects, such as comics or illustrated books. And the third tier would be selling services to creators in the second and first tiers, as they will require support structures to develop and market their work

Boardman’s YouTube channel has spawned a Discord community for AI artists. The creators there talk about how to improve the quality of their work and make commercial inroads. The Discord-native aspect of Midjourney seems to lend itself to forming such communities.

Indeed, another YouTuber who goes by the handle Cyankatana has taken a similar approach, starting a Discord too. Cyankatana told Wealth of Geeks that while he predicts a big market for AI artists in game development and the film industry, we’re not quite there yet. For now, he sees most people getting into selling prints, stock images, NFTs, freelance work, and of course, social media.

Although at least one major stock photo library, Getty Images, has banned AI art over fears of legal challenges, one area where these raw images are being commercialized is print-on-demand (POD).

One POD site that has become especially popular with AI artists is Redbubble. While Etsy charges listing fees and Shopify hosting fees, Redbubble lets users get started without the overhead. This feature can be crucial when uncertainty lingers over whether any images will even sell.

Boardman’s Redbubble shop has generated enough revenue to cover his Midjourney subscription in just a couple of months. Still, he admits that uploading new designs can be time-consuming, and the market may become saturated. It’s wise, he suggests, to take a multi-pronged approach and also work with brick-and-mortar businesses in your area lacking the know-how to generate AI art themselves. He explains he has already begun to do so with a local pub in his neighborhood.

Another strategy some employ is creating a highly curated POD shop that cultivates a perception of scarcity with limited releases. One Shopify store called Artiful Intelligence advertises that it only releases 42 new works monthly.

One application for AI art that has excited many would-be fiction writers is comics. Previously, the barrier to completing long-form fictional works was higher. Novels must carry a tone for hundreds of pages, while screenplays amount to nothing without being produced. Rightly or wrongly, many perceive comics to be a more forgiving medium than novels. And they can be created on the cheap, unlike movies.

However, that only applies if you can draw. And hiring an illustrator tends to be beyond the budget of most aspiring writers, while the fastest way to send an artist running is to suggest a labor-for-equity arrangement.

Enter the picture AI art tools, perhaps of no greater use to any category of people than aspiring comics writers. After only a few months of widespread access, some are already beginning to publish and sell their book-length creations.

One of the first out the gate appears to have been Kevin Hess, whose 706-page Midjourney-illustrated edition of the 1938 sci-fi novel Star Maker is available on Amazon. Hess has said in an interview that he does not consider himself an artist. Nevertheless, it would seem that he was in fact the first person to illustrate a full-length graphic novel with AI art.

Another person making a go at AI comics is writer and Midjourney artist Adam J. Rodriguez. Although it is free to download, at the time of writing, the first issue in his series Stargazer occupies the #2 spot in science-fiction graphic novels on Amazon. (It had previously hit #1.)

Rodriguez, who has aspired to create comics for many years and made a previous attempt at Stargazer with an illustrator, tells Wealth of Geeks he is happy and humbled to build an audience in the AI art world. Therefore, he says, it’s ok if this first release is free. His work is also being featured in an anthology called Artexmachina along with the comics of nine others, with the cover illustrated by legendary artist Dave McKean of Sandman fame.

It might seem paradoxical that NFTs would be the most established path toward earning revenue with AI art. After all, most people have only known about NFTs since roughly the summer of 2021. But that’s just how it is.

It should be pointed out that generative art, or using code to create art, has existed for decades. Some of the earliest success stories with NFTs were generative art projects, and this trend continues to this day. Tyler Hobbs, whose collection Fidenza currently trades at a floor price of roughly $128,000, creates art with algorithms.

However, a newer wave of AI artists using the text-to-image generators mentioned in this article, often in conjunction with Photoshop and other post-production tools, are working hard designing NFTs and marketing them on Twitter. Some artists sell their NFTs at bargain-bin prices on platforms like Objkt, the largest NFT marketplace on the Tezos blockchain. Others take the opposite route and apply for curated venues like the Ethereum marketplace SuperRare.

A word to the wise for anyone looking to go this route: immediately minting NFTs and listing them on marketplaces will get you nowhere. Building up a presence in the AI art community on Twitter and elsewhere by assisting others and sharing your art is a far better strategy. But this all takes time. Be prepared to buckle down and enjoy learning the craft – just as you would with anything else.

Laughably Bad Horror Movies and Where to Stream Them