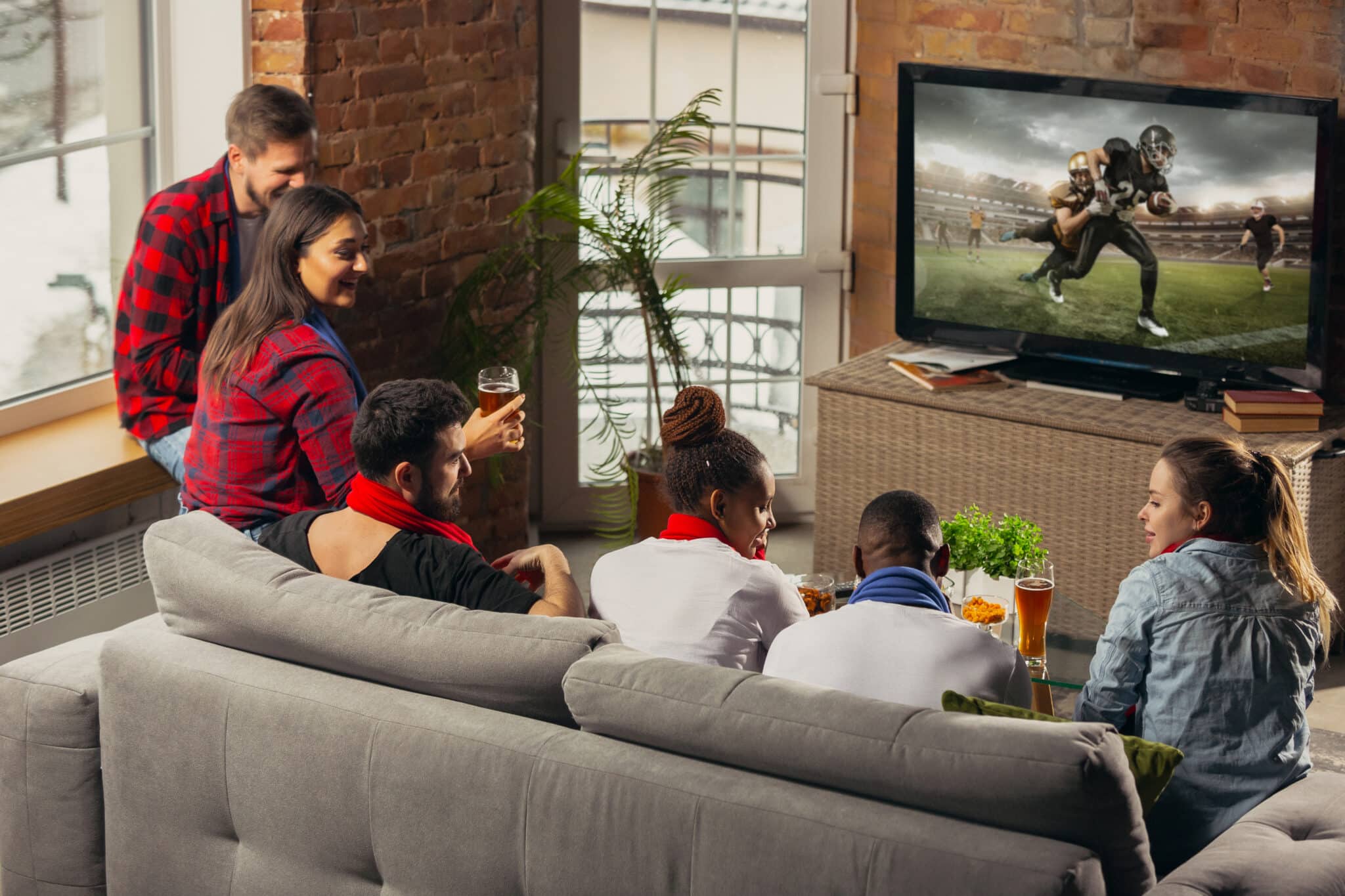 Cable TV is expensive, and it keeps getting more expensive. I'm sick of paying $200 a month for a cable subscription when all we watch are sports channels!

We love watching NFL games, but we hate having to pay an arm and a leg for cable just so that we can see our favorite teams on Sunday afternoons. How do people get around this? What other options are out there?

We'll show you how to cut your cord with our guide on how to watch the NFL games without cable!

How to Watch NFL Games Without Cable

Streaming Services or HDTV antenna are great options to watch the NFL season without a cable subscription.

With an HDTV antenna, you may watch local games as well. National primetime events are broadcast on television, but local broadcasts for afternoon games are dependent on your location.

Let us explore each option in detail and figure out what is right for you!

If you're searching for a live television streaming service to watch NFL, Sling TV is an excellent value if you want most of the channels you desire at a lower rate than Hulu or FuboTV.

Sling TV is not an actual streaming service; instead, it's a way for you to reconnect with channels where you've cut the cord. Sling TV provides access to all of your favorite news networks, live sports, and live entertainment channels in one place.

Sling TV offers three different price tiers for their program, each with a different number of accessible channels and the number of devices you intend to stream on. They provide discounts for your first month with the service, bringing the cost down to $10 if you want to try it out.

Hulu has a lot of award-winning series, so you might already be a member. Upgrading to Hulu Plus Live TV may be an excellent alternative if you want to watch NFL games without cable.

If you want to combine and save, Hulu is under the Disney umbrella so that you can get a great deal. Who wouldn't want to bundle two of the finest streaming services?

Hulu has struck a deal with the NFL Network to include it on Hulu + Live TV for 2021. That's significant for sports fans since the NFL Network offers eight unique Thursday Night matchups that aren't available on Amazon or Fox.

For a $10 monthly charge, you may upgrade to the Sports Add-on Pack, which includes NFL RedZone for an additional seven hours of action every Sunday afternoon all NFL season long.

Without dealing with a contract, you can enjoy the same package of programs as those subscribers who pay for cable. YouTube TV is another excellent option if you want to feel like you're receiving cable without having to pay for it. Over 85 top channels of entertainment, news, live sports, and more are included in this service. You may even record programs.

You get twenty extra channels with YouTube TV versus Hulu + Live TV and a $10 lower price. You may also pay to add premium channels, as is the case with Prime Video and Hulu.

I know you might be wondering if it is worth saving $10 per month? But don't dismiss how you can use the $10 to get involved in real estate through various real estate crowdfunding websites.

FuboTV is another one of those streaming services that cord-cutters will appreciate. They provide a wide range of channels to make you feel like you still have cable, allowing you to customize your channel choices. You can also purchase in-service add-ons to get precisely what you want to watch.

The DVR feature allows you to record the hours of your favorite shows. The service also enables you to watch on more than one device at once.

You may choose to spend an extra $11 per month on the NFL RedZone add-on.

The Starter Plan includes access to local NBC, Fox, and CBS stations (depending on the regional availability and blackout restrictions). You can also watch Monday Night games on ESPN all season long with Fubo TV's Starter Plan.

You can add NFL RedZone as part of FuboTV's $11-per-month Sports Plus add-on package if you want game highlights and replays from every Sunday game.

NFL Sunday Ticket enables fans to watch all out-of-market Sunday afternoon games. The service, however, is restricted to a select few locations.

There are two different options:

Both subscriptions give you access to all of Sunday afternoon games outside your market. It means you won't be able to watch Thursday, Sunday, or Monday night games. You won't be able to stream locally broadcast programming with an NFL Sunday Ticket subscription alone. This option is only for individuals wanting to stream NFL games live of their favorite teams from out of the market. Both offerings include a feature in which you may view four games on your screen at once.

A Paramount Plus subscription might be all you need if you want only to watch locally televised AFC home games. The service allows you to live stream live CBS television, as well as a growing selection of on-demand programs and premieres.

Paramount Plus provides live streaming for each NFL game that airs on the regular CBS channel in your local market. You can't watch any games that air on other networks or out-of-market matches because Paramount Plus only broadcasts CBS programming.

CBS and Paramount Plus have signed a new contract that will bring an expanded schedule of games, including some with NFC teams, beginning in 2023.

Peacock has all of your favorite comedies and science-fiction programs available in one place, along with all of the NFL games that are aired on NBC. If you only want to watch NFL games using a Peacock Premium subscription, you'll be limited in some way.

If you are not a Prime member, you can sign up for a 30-day free trial, and you'll get the games along with your favorite live sports, series, and movies.

Amazon has no plans to broadcast additional games, so Prime Video on its own is only suitable for casual fans who want to watch a few games this NFL season. But since you already might be paying for Amazon Prime, you are not spending any additional money. You can use the savings to invest in stocks or real estate, or both.

In 2022, Amazon Prime will become the only legal place to watch NFL Thursday Night and neither Fox nor the NFL Network will carry the games. This long-term agreement, which runs through 2032, includes a 15-game pact that begins next year. Each game will also be shown free in each team's home market. Amazon will also broadcast one preseason game per year.

If you only want to watch in-market games without cable or an antenna, you can use the Yahoo Sports or NFL app to stream live local and primetime games on the phone. Both services are free, and each app is available on iOS and Android platforms.

Live streaming for local and primetime games, the playoffs, and the Super Bowl is available through these applications. That being said, you must use a mobile device to watch the games. You could mirror your smartphone or tablet to the TV with Roku, Chromecast, or Apple TV.

You'll also need to make sure that your phone or tablet's location services are turned on. Sunday afternoon out-of-market games are not available to watch, which is the domain of DirecTV.

You can watch any game you choose with NFL Game Pass, but there's a catch: you'll have to wait until the game's primary broadcast has ended.

The streaming service is $99 per season (or four $30 monthly payments), and it allows you to relive all of the regular season games, as well as previous seasons' matches. It does not include the Super Bowl.

AT&T is splitting off the company's TV and video operations, including DirecTV and AT&T TV, into a new firm called New DirecTV. Even with higher-tier plans, there is no longer an option to receive the NFL Network, NFL Red Zone, or NFL Sunday Ticket. AT&T TV subscribers, on the other hand, can watch NFL Sunday Ticket if they do not have access to satellite service in their area. Every Sunday, you may stream live out-of-market NFL regular-season games with this service.

How to Watch NFL Games for Free

We've shown you how to watch NFL games without cable using a variety of streaming services. However, most of them will cost you something, depending on your current streaming services and what you want to see.

On most Sundays during the day, both CBS and Fox will broadcast your local NFL team's games for free via over-the-air transmission. That implies you need a TV antenna.

Also, all of NBC's Sunday Night games and Fox's Thursday Night matches will air over the air with the exceptions of Week 2, Week 3, and Week 4. For those three weeks, you'll require access to NFL Network.

That means the games you won't get to see are Monday Night ones on ESPN and perhaps a few Thursday Night ones (some are exclusively on NFL Network). Of course, if your local Market team is playing Monday Night, the game will probably be broadcast locally.

Bottom line: with an antenna, you may watch a lot of games for free.

For about $25, you can get an HDTV antenna and connect it to your TV to access local channels.

By connecting an HD antenna to your TV, you can watch local over-the-air (OTA) signals in your area. As a result, you can watch the local affiliates of major broadcast networks such as Fox, CBS, and NBC.

It allows you to view all of the regional games broadcast from wherever you happen to be. If you're only looking for coverage for your team, this one-time charge is an excellent choice to bump up your savings rate. You can't watch any out-of-market games or ESPN or NFL Network broadcasts, however.

With the advent of Streaming services and HDTV antenna, we now have an option to pick and choose what we watch.

These days, many people are “cord cutting” because they don't need a massive cable TV package anymore. There's a better way to watch live sports without having to pay for hundreds of channels or dish out money every month for something that most people only use once in a while.

The advantage of the various streaming options is paying for only what you want to watch. If you have been trying to get ahead financially, you can now have your cake and eat it too. Make sure to invest the cost savings from cutting out cable into some passive income-producing assets.

9 Ways to Get Free Amazon Prime (Or at Least Cheaper)

How To Pay For College: 7 of the Best Money Saving Tips

No Income Tax States: Who Benefits From Living in One