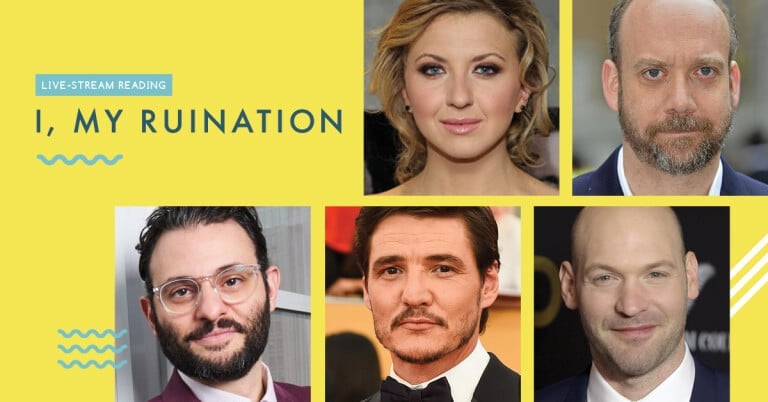 In the age of quarantine, enjoying theatrical productions — albeit reinvited due to current restrictions — has become easier than ever. Theater and film productions alike have been struggling since COVID-19 shuttered their doors, but every day creative minds have found new ways to bring all of us together.

If you are unfamiliar with the play, don’t worry! Kevin Artigue’s I, MY RUINATION  was meant to have its first staged reading in April of this year, as the culmination of Artigue’s Working Farm Residency at SPACE at Ryder Farm, but it was canceled due to COVID-19. Artigue’s play found a new home with The Cape Cod Theater Project, along with a star-studded cast directed by Hal Brooks.

The air in Hollywood is swirling with rumor when, in January of 1952, director Elia Kazan appears before the House Un-American Activities Committee for the first time. In defiance, he refuses to name his former Communist friends and denounces any attempt to blacklist them. Three months later, summoned back again before the committee, he is visited by his old friend, Arthur Miller. Kazan must decide between confronting his accusers or betraying his ideas.  Told through shifting points of view, we enter the hearts and minds of Kazan, Miller, and a brilliant, morally complicated Molly Day Kazan as they wage a war of ideas that will shape and define the rest of their lives.

Watching actors perform in the isolated rectangles of Zoom evokes something, not unlike black box theater. When theater is stripped down to its most simplistic form — lighting, costumes, make-up, and scenic design are not the primary concern. The script, direction, and intimate performances of the actors make a play stand out.

Artigue has crafted a play that is both grounded in the Red Scare, yet timelessly relevant to the world in which we live in today. He sprinkles in lines about “right-wing hacks,” immigrant status, police brutality, and numerous other situations that go beyond a certain time, because they are situations so deeply grounded in American idealism and the mirror of Hollywood.

I, MY RUINATION is laid out in four parts. The first three parts take place over a three-month span, from January to April of 1952; with the latter part taking place ten years later in Paris. The play is rather unique in the way it has framed scenes with both first and third-person narration.

It will be interesting to see how these exposition-heavy scenes will be transitioned to the stage. With the restrictions of the live-stream format, at times the scenes felt a little heavy-handed and on-the-nose, but ultimately they did help to move the story along and delve into the psyche of the characters.

Elia Kazan (Paul Giamtti) stands at a crossroads — the government has subpoenaed him about his involvement with the Communist Party and, by extension, his Hollywood associates who participated in The Group Theater. His questioning at the cool hands of Raphael Nixon (Pedro Pascal) feels authentically D.C., where you can be questioned about your communist ties and recommended the best place for lunch in the same breath. On his way to Los Angeles, Kazan calls his wife Molly Day Kazan (Nina Arianda) and this stilted encounter sets up a stand-out moment that doesn’t arrive until Part Three.

Kazan has a lot at stake with the Academy Awards around the corner and his Best Director nomination for A Streetcar Named Desire. Those stakes are made abundantly clear when Kazan meets with Spyros Skouras (Arian Moyed), the President of 20th Century Fox, and it becomes clear that naming names will have ramifications on his career. Even going in for questioning has stirred the proverbial plot. Moyed created this perfectly egotistical, larger-than-life studio head who wants to be Kazan’s friend, but clearly only cares about the bottom line.

Fresh off the heels of the tense questioning in D.C. and the uncomfortable meeting with Skouras, the play offers a brief moment of brevity when Kazan meets up with his old friend Tennessee Williams (Pedro Pascal) at a bar in Beverly Hills. Pascal plays a wonderfully drunken and flirtatious Tennessee Williams, complete with a charming southern drawl.

Part Two introduces Arthur Miller (Corey Stoll) who comes to Kazan with his next great idea — a play about the Salem witch trials. He’s discovered parallels between the book The Devil in Massachusetts and the Red Scare. During Miller’s visit, he and Kazan discuss the situation at hand. Miller is idealistic, but Kazan has real fears. Going against the government could cause him to lose his passport; he might never be able to film abroad again. It seems that those are fears that Miller is too privileged to recognize.

Stoll is phenomenal as Miller, he’s affable, aloof, and driven. It’s easy to watch him and picture him as the man that would go on to pen some of the most well-known plays in American Theater.

“Then the truth is Anti-America.”

As Miller and Kazan part ways, the Third Part of the play begins. Molly has found her voice. For anyone who has researched the prominent figures from the Red Scare, you will know that Molly has been largely left in the shadows. Arianda brings her to life with Artigue’s script. As a woman, her struggles in the industry resonated with me as an audience member. She was only listened to when she was useful in helping men succeed; she was only hired by the Communist Party to write as an editor because it looked good for mission; and she struggled to write because she had to be the anchor at home to support her husband’s successes.

Arianda delivered a heartbreaking soliloquy throughout most of Part Three that flipped the play on its head. It pivoted and it felt like the play was hers. With more fine-tuning, Artigue has something truly wonderful with the way he’s given Molly a chance to say her piece. The stage is set poignantly — she’s on the inside looking out on what she’s missing. Much like a writer is looking in on a world they’re not part of.

Part Four closes out the production with Kazan giving a heart-wrenching interview in France. The Film Critic (Arian Moayed) is meant to be asking him about On the Waterfront, but instead the conversation turns towards the Red Scare and his part in naming names. Giamatti nails the emotions of the scene and the physical weight of the burden of grief is not just visibly present, but it’s there in the stories Kazan tells of a trip to Istanbul.

The actors manage to create a warm familiarity between their characters; one that breathes life into these legendary figures who stand out in the history of the Red Scare. That sense of familiarity is a feat considering they are bound by the restrictions of staring into cameras, offering heartbreaking soliloquies alone in their rooms. It was clear in the talkback that followed the performance, that despite the format, the audience empathized with the characters Artigue created.

While I would never advocate for moving live theater to a solely digital experience (we already have television, after all) I would love to see this type of workshopping experience become a new alternative. I look forward to seeing I, MY RUINATION on stage in the future. Artigue has created something truly special and I see a future where it is paired alongside The Crucible in Acting classes across America and beyond.

You have one more chance to see I, MY RUINATION. Tickets are still available for the Saturday, July, 25th performance.  The production runs for roughly 2-hours, with no intermission. The performance is followed by a talkback with the director Hal Brooks and writer, Kevin Artigue.

How To Build Credit (Increase Your Credit Score Fast)