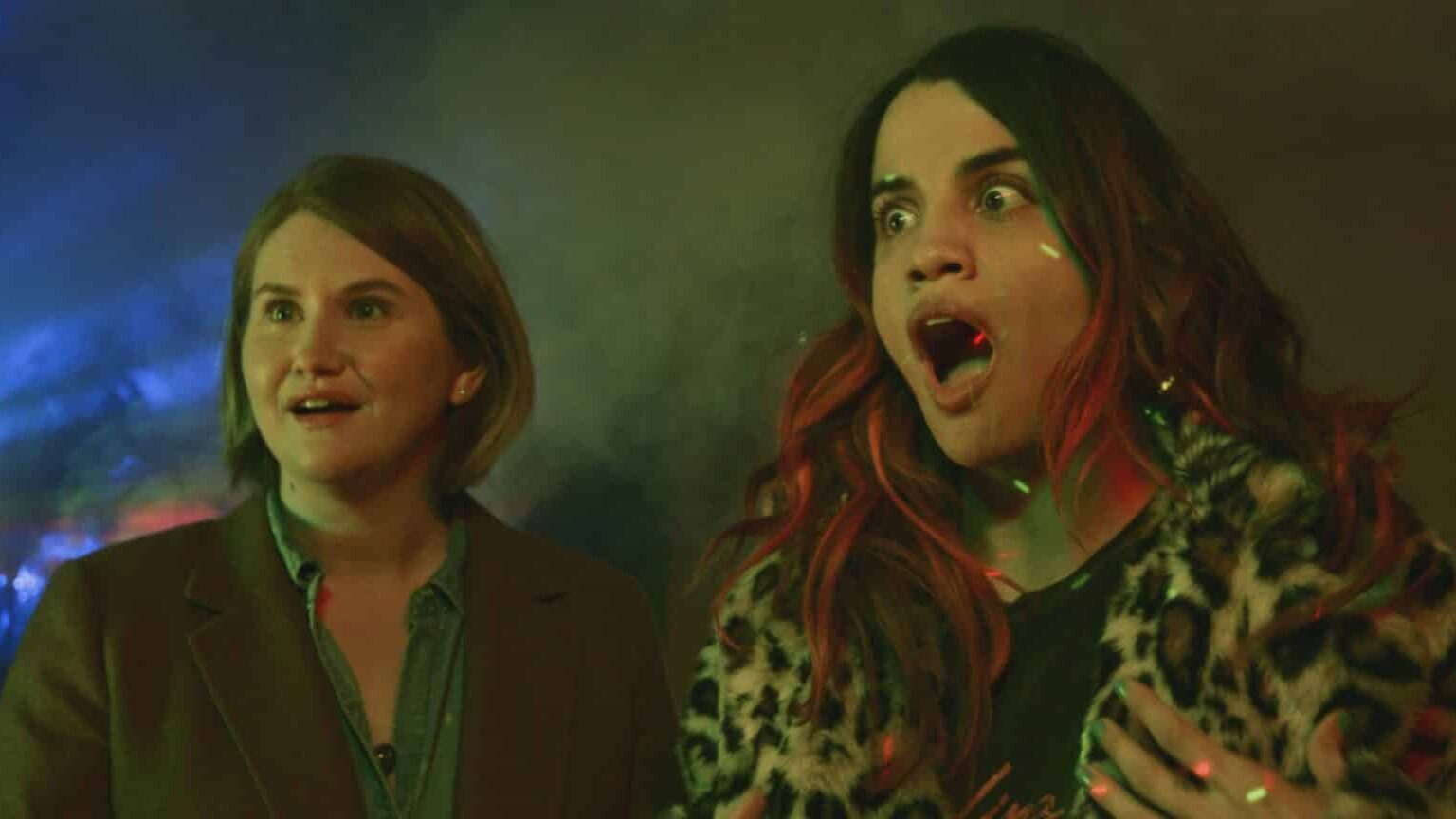 When you hear “science-fiction movie” you probably think of explosions, lasers, spaceships going into hyperwarp, and also more explosions.

I’m Totally Fine is not that kind of space war shoot-em-up science-fiction movie. It’s more like Good Luck to You, Leo Grande—an intimate relationship film with conventional beats. Our main characters meet cute and strange. They grow to understand and appreciate each other despite adverse conditions. They have a third act fight. They reconcile.

It’s not earth-shattering. But the SF premise gives the small story a sense of opening out into larger vistas, eternal and external. In the end, maybe the planet does shift a little, after all.

Grief Is An Alien

The movie begins with Vanessa (Jillian Bell) driving out alone to a rented house. She’s in some distress, and we quickly learn that she’s grieving. Her best friend and business partner Jennifer (Natalie Morales) died suddenly shortly after the two of them had signed a lucrative distribution deal for their organic soda. They had been planning a lavish party together to celebrate.

Instead, Vanessa is left alone in an empty house to contemplate the wreckage of her personal and professional life. She can’t even get the caterers to cancel the party.

So far, that sounds like a fairly standard indie slice of life weeper. But then things get weird. Vanessa wakes up one day, goes to the kitchen, and Jennifer hands her a cup of coffee. Except, it’s not Jennifer.

Instead, not-Jennifer explains, she is an alien sent to earth to study Vanessa the way humans study chimps. To sweeten the deal, not-Jennifer has all of Jennifer’s memories, so Vanessa can quiz her while not-Jennifer measure human lung capacity and cooking.

Is this a cutesy premise? Is the metaphor about grief and memory and letting go a little on the nose. Yes and sure.

But writer Alisha Kerry and director Brandon Dermer are careful not to put more on the concept than it can hold. The adventures and complications here are so restrained they barely exist. Not-Jennifer reveals small secrets, not large ones. Vanessa and not-Jennifer negotiate how to deal with the DJ who was supposed to play at the party (portrayed with endearing cheer by Harvey Guillén. Not-Jennifer explains that she needs to constantly drink olive oil to avoid coming apart in the sun. And so forth.

Without much in the way of plot or action, you’re left to watch the lovely performances by the two leads. Morales has great fun wearing not-Jennifer’s body like a sheath that doesn’t quite fit right. She is all elbows and angles as she makes twisted, awkward faces trying to adjust herself to her teeth or her irritating eyebrows. Her speech is robotic and stiff, but only slightly so. She doesn’t come across as a stranger, but as a slightly misremembered friend. She’s familiar, but some of the details are not quite right.

Jillian Bell has fewer tics to explore, but her performance is if anything even more compelling. Vanessa is a very together person on the verge, and over the verge, of falling apart. Bell captures the character’s repeated surprise as grief robs her of her competence, her assurance, and her sense of self. After initial hesitation, she embraces not-Jennifer not only because she misses her friend, but because she misses the person she was with her friend. She wants to recapture the Vanessa who knew where she was going and how to get there.

Developing a relationship with not-Jennifer doesn’t exactly take Vanessa back to Jennifer, or to the old Vanessa. In some ways, alien and human are old friends; they share memories, secrets, favorite songs. In other ways, though, they’re building something new together. The movie is about new and old female friendships. And it’s also about how you have to tentatively and painfully fit the memory of a loved one into your life.

I wish the creative team hadn’t defaulted to the lazy “aliens don’t understand emotions” trope, especially since it’s obvious that not-Jennifer understands emotions just fine. But I did appreciate the movie’s willingness not to explain or give us much more background than the little bit we need for the plot to move ahead.

All those big science-fiction movies with explosions make you feel what it’s like to whoosh through space. They pump you up till the galaxy seems like it can fit in your hand, or at least on your screen. I’m Totally Fine, in contrast, is content to let most of the universe remain a mystery, like death and grief and love.

I'm Totally Fine will be in Theaters, On Demand, and available for digital download on November 4, 2022.

Moving to a New City? These Are America’s Most Neighborly Cities

Female-Led Relationships Give Women Control of Household Decisions and Finances