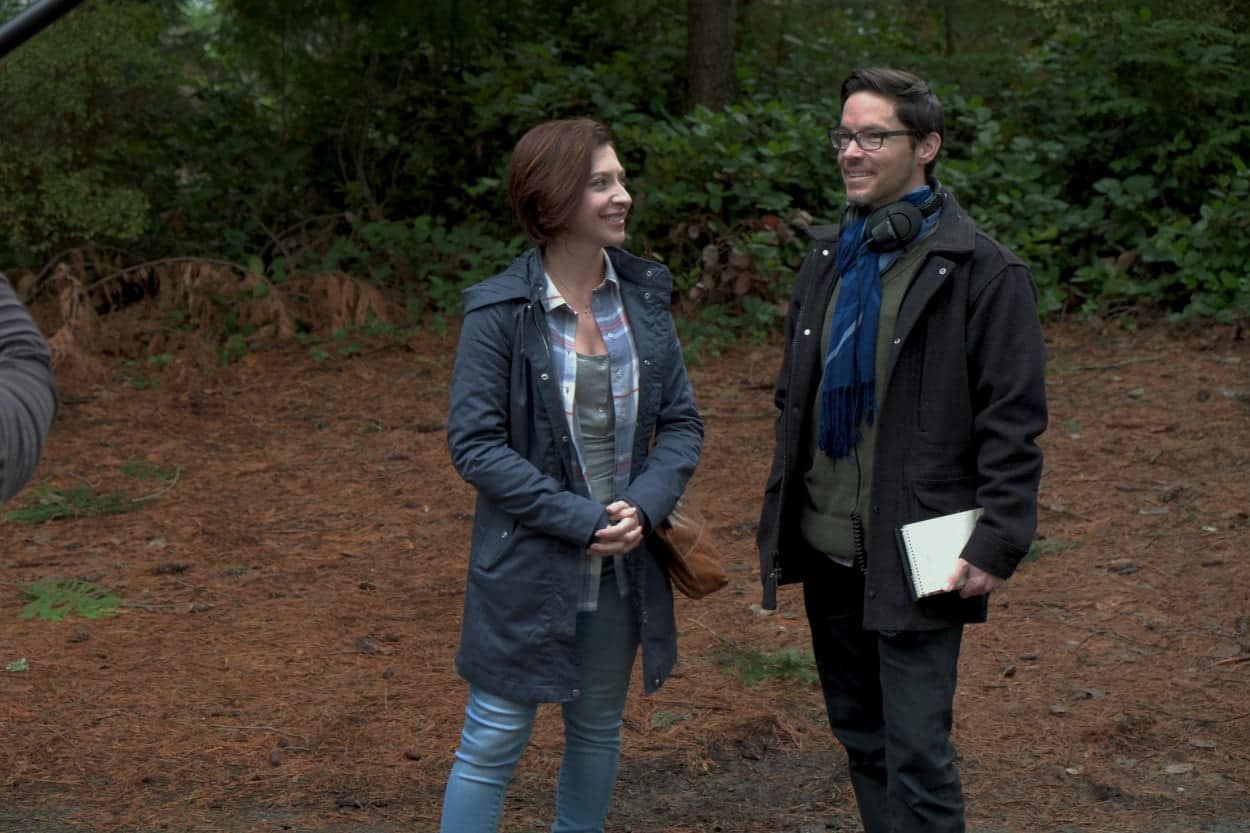 Last week, we brought you the chilling trailer for the new horror film The Parish.

This week, we're excited to bring you an interview with the film's Director David Hogan and its Executive Producer and star Angela DiMarco. The couple has a long history in the film industry, from notable appearances in the fan-favorite series Z Nation to extensive work in the Seattle film industry and theater scene.

ML: What drew you to Todd Downing’s screenplay for The Parish?

David Hogan (DH): I loved the story and the characters. Todd's screenplay has a wonderful combination of a dramatic narrative (Can we prevail without faith?) set inside a frightening backdrop (a town and a church haunted by its past). As a huge fan of character dramas and horror movies, The Parish, on the page, provided a fantastic springboard for creativity. All I needed was a great team – and we assembled just that (I also produced).

ML: I know you’ve directed short films in the past, but with this being your first time directing a feature film, how did you approach this project? Were there any plans you had that ended up changing on the day?

DH: I approached this feature with more care and deliberation because the stakes were higher. Yes, I have directed short films and was a producer/lead actor on the feature film Narco Hitman, but because this was my first time in the director's chair (not that I had one of those, mind you), I needed planning and support.

The first order of business was assembling a stellar cast and crew. I knew I had an amazing anchor for my film with Angela DiMarco as our lead, Liz Charles, but I needed an amazing set of supporting actors to round out the ensemble. As an actor/director, I have always loved the casting process, and I have a deep admiration and respect for actors and the craft. I did not doubt that we could find great actors, and I knew I could find great talent right here in my backyard, the Pacific Northwest. Most of the cast are local to Seattle, but when I was able to cast horror movie icon Bill Oberst Jr in the supporting role of Father Felix, I knew we had something special.

As far as changing things on the day? Well, as an indie film director, you have to roll with the punches and be adaptable. The climax scene in the church was long and challenging, but the result is fantastic. I remember telling our Cinematographer, Domenic Barbero, that I had never captured anything as dramatically theatrical as that before (it's a good vs. evil showdown, after all), and he received more than a bit of praise from me that day.

ML: Are there any horror films that you were inspired by while directing The Parish?

DH: We talked about our favorite horror films during pre-production, and I know the writer was inspired by a few. However, I wanted to carve my own path for this film without a lot of deliberate influence or homage to personal favorites.

ML: What sets The Parish apart from other horror genre films like The Nun or other films that utilize religious symbolism and nuns' horror?

DH: While our film does have a nun (and an exorcism!), the heart of the film is centered on the story of Liz Charles and her struggle to put her life and family back together and losing her husband during the U.S. combat mission in Afghanistan. Liz is suffering, but our nun has also suffered. Pain is at the center of both of their stories. In The Parish, Liz learns how dangerous it is to run away from pain instead of comforting it. In the final act of our story, she stands up with Father Feliz to confront a manifestation of her pain in the form of an evil spirit. Will she prevail? Well, I guess you'll have to watch the movie, reader.

ML: I noticed a lot of red in the trailer — how do you use color in the film?

DH: Movies tell stories visually, and color can be very emotional. A lot can be done with lighting, design, and color grading to help tell a cinematic story. To me, red can symbolize love and passion. But it can also make things seem dangerous and menacing – that's why there is a lot of it in the climax scene. Our Cinematographer gets a lot of credit for the visual landscape of The Parish. Still, I also have to heap praise on our Colorist, Tim Maffia, who absolutely nailed it in post-production, and Tony Tibbetts, who edited.

ML: Are there any types of films that you’re looking to direct in the future?

DH: I don't know about you, but right now, I need more laughter and levity in my life. So, I hope to direct a comedy next.

ML: Once The Parish comes out, what’s next for you?

DH: I am currently a producer and lead actor for Tim Carpenter's Mr. Bleachers. We have a few more days of principal photography that we hope to pick up this summer. As an actor, I have two films releasing soon. This summer, The Stairs releases. I also have a part in Rebel Kat Productions' All Those Small Things. I really look forward to seeing both of those. Of course, I will continue teaching the craft of on-camera acting with my better half, Angela DiMarco, at Mighty Tripod Acting Studio.

Maggie Lovitt (ML): You have been in several horror genre films; what is it about that genre that you’re drawn to? Do you have a favorite horror film?

Angela DiMarco (AD): It all started when I was a little kiddo. My cool uncle Guido would babysit me, and we'd watch Nightmare on Elm Street and listen to Pink Floyd's The Wall. Then I got addicted to every paperback Stephen King novel, and my dream became to be in or make horror movies. Over my 35 years in the industry, both on stage and screen, I've learned a ton. I now love all film genres, but there is a special place in my heart for horror/thrillers with a good story. I love diving into powerful stories that have added supernatural elements.

ML: You’re also the Executive Producer on The Parish; what was it about this screenplay that you were drawn to it?

AD: My dear friend, Todd Downing, the writer of The Parish, pitched it to me years ago. We all gathered at his house, read the script, and I knew I wanted to produce it. But making a feature film takes time, resources, and a lot of preparation. So flash forward years later, and David and I told Todd we wanted to produce the film. I had some script ideas/changes, and Todd was incredible to work with.

We made my role, Liz, a bit stronger, her daughter older (from kid to teen), and a few tweaks on the supporting roles. I loved the story for being a slow burn exorcism film and a film about loss and grief. And we really follow three journeys of grief. From war to small-town priest, Father Felix, Audrey losing her Dad and being forced to move, and Liz, a mother, and wife who struggles to find hope in anything. NOW add a creepy nun with a dark past, an awesome cast and crew to bring it to life, and my husband's directorial debut; how could I not want to make it?!

ML: When you’re looking for roles to take on, what do you look for in the script or the production?

AD: Strong female roles, diversity in the cast, an important story/message, or a strong comedic storyline, and then I want to know who is on board with the project.

ML: What kind of journey does Liz go through over the course of The Parish?

AD: From that of a person running away from her fears, trying to drown them out, and try to forget it all. To that of a woman stepping into her power, embracing her grief, and being there for her loved ones when they need her most. And by the end, she knows she is stronger.

ML: Are there any particular scenes that were your favorite to work on?

AD: So many! As crazy as it sounds, the nightmares scenes were powerful for me. Fully diving into a role and experience like that is scary but also freeing. In particular, the scene ends with a nightmare, and Sanae/Audrey runs in to comfort me. I couldn't stop crying after one of the takes, and Sanae just held me, and that Mother/daughter and actor/actor moment was utterly powerful.

I also was beyond excited to work with Bill as our Father Felix. I loved our fireside scene together, the office scene, when I came to him with the Beatrice photo, and on and on. Bill is an incredible scene partner to work with. Our cast was amazing, and everyone gave me so much, knowing I was juggling many hats. But the cast, crew, and David made sure I was supported and able to do the work. I do have to shout out Sara Coates; her scenes were always a breath of Comedic fresh air. We all would be laughing on set, and it was nice to do some lighter scenes.

ML: What do you do to prepare yourself for really high-anxiety scenes?

AD: I always create a soundtrack for my roles, I have songs for certain scenes, and I also ask my director to get me at the very last moment before “Action!”. Making a movie is not like live theatre, where we can tell the story from start to finish and ride the scene's emotion before. The film is pieced together; doing scenes out of order and multiple takes means different setups. On one of my first feature films in my 20s, I learned that you have to ask for what you need. Since that, I have locked in on my character development so that I know I can deliver and feel good about my contribution.

ML: What do you do unwind after a really emotionally draining day of scenes?

AD: Nachos and Skyrim, hands down.

A Physicians Guide to Financial Freedom

Review: ‘Alphabet Squadron: Victory’s Price’ Is an Emotionally Satisfying Conclusion to the Trilogy