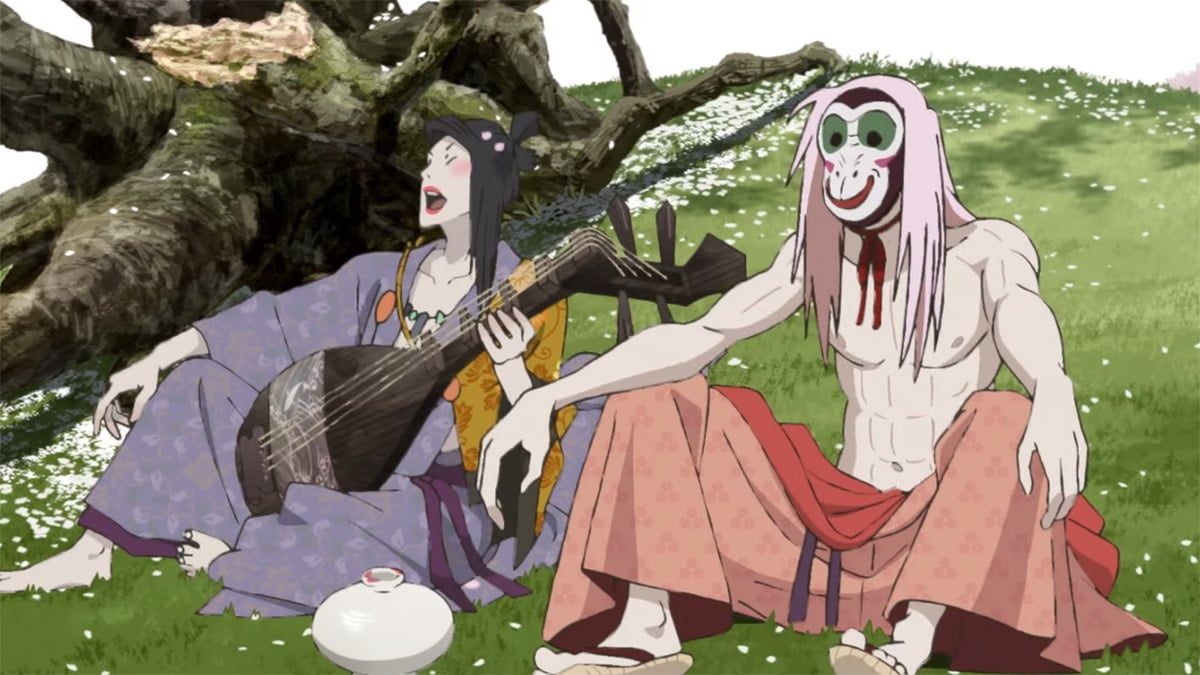 From the brilliant mind of writer/director Masaaki Yuasa comes Inu-Oh, the latest GKids animated film. This movie focuses heavily on something we could all use a little bit more of in this world – treating others with respect and dignity. That isn’t the only life lesson, however, as this film teaches about never forgetting the past as well.

Inu-Oh has two main characters, a boy named Inu-Oh who was born hideously deformed and is forced to wear a gourd mask and eat on the ground with the animals, and a blind boy Tomona. The two unlikely friends cross paths and bond over their love of music. Of course, it helps that Tomona cannot see Inu-Oh’s face, which in turn allows Inu-Oh to feel safe around his new friend and open up to him.

Tomona was not born blind. In fact, he is blinded at the start of the film. This background for the character is important to the story but does drag on a bit too long. It takes a while to get the musical part of the movie which is easily the best part of it and what makes it so unique. Even with this being something that audiences need to know to understand the character and the third act of the movie, it could have been handled in a much better way. There was no need for it to go on as long as it did. Once Inu-Oh is introduced, that is where the movie really starts to shine.

The main thing that works with the start of Inu-Oh, however, is the lack of color. As the pair of friends start to unlock their musical abilities, the film gets brighter and brighter. This was a wonderful way to express the joy that was brought into their lives by their craft.

Inu-Oh focuses on telling the stories of the lost Heike spirits that have surrounded him since he was born. There was a battle many years before this, and their tales have been lost and changed over time. It is up to Inu-Oh to reveal their truths and make sure the people understand what they went through. This is done through several epic musical numbers that mimic classic rock concerts – complete with fireworks, behind-the-back guitar playing, and screaming fans.

Tomona, who changes his name several times throughout the movie, introduces these stories with musical numbers of his own. They both are extremely talented and enjoy the showmanship of their performances.

The hand-drawn animation style of Inu-Oh immediately stands out, and only gets more impressive as the story goes on. During the final act there are several massive musical performances that, even though they take place 600 years ago, mimic classic rock concerts of more recent times. These scenes are powerful for many reasons, but when there are huge crowds of people screaming, dancing, and singing along to the songs Inu-Oh is playing, it is impossible not to be sucked into the fun of it all.

Inu-Oh might seem like a movie that is mostly about finding yourself, and it is, but there are some heavy LGBTQ+ undertones. Not only are Inu-Oh and Tomona the best of friends, but there also seems to be a spark there. They have a bond like no other and it's wonderful to see them find joy in each other as the story goes on.

The way that Inu-Oh transforms with each of his shows, becoming more and more true to himself as he evolves, seems very much like a transexual reference. The more comfortable he gets in his own skin, the more unafraid he is to be himself – until he eventually transforms into a look that makes him happy.

This isn’t something that is super in your face, but it is done in a subtle enough way to feel natural to the story. It is nice to know that more people will be able to see themselves on film with Inu-Oh, and hopefully, it allows them to love themselves and show who they are inside and outside, without being afraid to do so.

Inu-Oh comes to select theaters on Friday, August 12th. Click here for more on all the movies out right now.

Review: I Am Groot Mines Sassy and Sweet