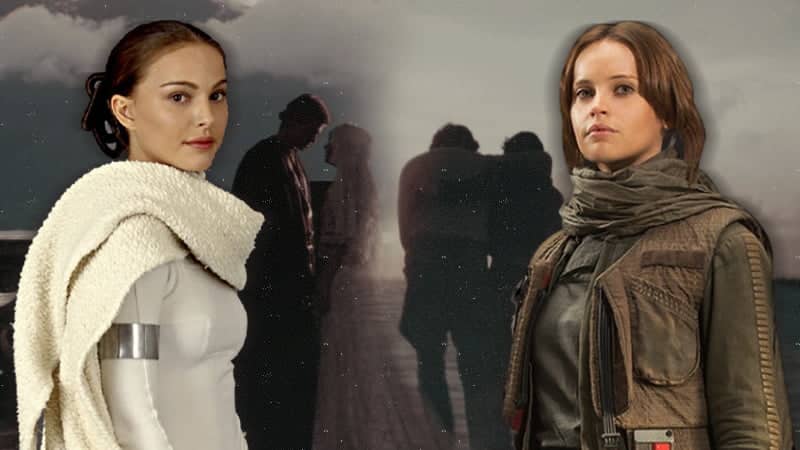 Most of the recent Star Wars stories center around male characters like in The Bad Batch, The Mandalorian, and the upcoming Andor and Kenobi series.

There’s nothing wrong with this.

In fact, I’d confidently say that Din Djarin is one of my top five favorite characters. But so much of the discourse on social media centers around characters like Luke Skywalker, Anakin Skywalker, Obi-Wan Kenobi, Cassian Andor, and all of our favorite clones. What about the kick-ass women of Star Wars?

This series was born out of frustration that on Star Wars Day, that one day out of the year that we make a concentrated effort to celebrate the franchise that we love, that so many tweets and articles on the interwebs had been dedicated to the men of Star Wars. Not the women.

You have already seen why women like Vice Admiral Holdo and Fennec Shand are epic, but now let’s salute two young heroines who were cut down in their prime.

Padmé Amidala Naberrie: teenage queen, anti-war senator, fierce fighter and lover, and the late mother of Luke and Leia. While some people want to place her on an unrealistic pedestal, I have always found strength in her character — flaws and all.

I was first introduced to Padmé, like everyone else, in The Phantom Menace. I was a child, just six years old, and the idea of a badass fourteen-year-old queen checked every box for me. When Attack of the Clones rolled around, I was swept up in the innocence of her romance with Anakin. She wore beautiful gowns, held her own in the male-dominated senate, fought valiantly in the arena, and got a love story.

Revenge of the Sith broke my heart — even though I knew that she would have to die, considering we knew who Luke and Leia were raised by. A tragic end for someone who, undoubtedly, would have been a figurehead in the rebellion, just as her daughter became.

The Star Wars fandom has already had a complicated relationship with deleted scenes, because they don’t really count as part of the continuity, but I choose to count all of Padmé’s deleted scenes as canon. Padmé, Bail Organa, and Mon Mothma were the spark that lit the flames of the Rebellion. Padmé was literally and figuratively the mother of the Rebellion.

I will always be thankful for Star Wars: The Clone Wars and the fact that we got an expanded look into her life during the Clone War. It gave her time to become a fully actualized character: one that believed in her personal convictions.

And yes, she does make foolish decisions. There’s no way around that and, furthermore, it’s good that she does. She’s a character that young women can look up to, flaws and all. Padmé had power and responsibility forced onto her as a child, she lost close allies and handmaidens, she paved a path forward for herself and her people, and she jumped headfirst into a relationship that she should’ve avoided. But it’s okay to be selfish sometimes. It’s okay to fall in love.

In R.A. Salvatore’s novelization of Attack of the Clones, Padmé’s sister Sola points out, “You’re so tied up in your responsibilities that you don’t give any weight to your desires.” While this may not be in the films, this dedication to everyone else first is seen In Padmé’s arc. Anakin finally provides her an opportunity to choose herself and her own desires.

Ultimately, they understand being young adults who have had unfathomable responsibility placed on their soldiers as children. They’re both idealistic, even if they approach solutions differently. And they were both manipulated by Sheev Palpatine.

Unfortunately, Padmé’s story is deeply flawed in its execution. In part, this is because men have been the main architects of her story, but even when others have been handed the pen of her story Padmé has been twisted into a level of unattainable perfection that few can relate to.

Her future was set into stone before we ever knew her name. But that doesn’t lessen her impact for fans who were introduced to her at a young age and saw something of themselves in her.

I love Padmé for who she is. The character that we see in the Prequel Trilogy, the one we see in Star Wars: The Clone Wars. I love the strength and power that she conveys while embracing the fashion and grandeur of her homeworld. Padmé Amidala Naberrie was a woman who could wear the finest gowns in the galaxy, stare down the conflict of political betrayal, and fight alongside the most powerful Jedi in hopes of ushering peace for the galaxy she loved.

Out of all of the Star Wars films that we have to choose from, Star Wars: Rogue One is my favorite Star Wars movie. I have spoken at length about why this film means so much to me and most of it comes down to the timing of its release. But the characters are a major part of the appeal. I could wax philosophical about Cassian Andor, his lifelong involvement in the fight against the Empire, but today I’m choosing to discuss Jyn Erso. Her life, her legacy, her impact.

Without Jyn Erso, Star Wars: A New Hope would not have happened. This a fact that is weird to consider, considering Rogue One was released in 2016 and A New Hope came out in 1977. But Star Wars has this wonderful way of broadening the story that we already know by adding to the story that came before it. Jyn Erso may not have been known to us until 2016, but her story has always been an integral part of the trajectory of the story that we all love.

I always joke that I have never not felt represented in Star Wars because I am a white brunette, and there seems to be a galaxy full of them in the franchise. But Jyn Erso always felt different for me. Mostly because she was played by Felicity Jones, who I have adored since 2007 when she brought to life my favorite Jane Austen heroine Catherine Morland in ITV’s Northanger Abbey.

Jyn Erso did not live an easy life. Every ounce of her resentment towards the rebellion, towards the Empire, towards everyone was earned. As a young child, she watched her mother, Lyra, die at the hands of Krennic. She watched her father, Galen, leave with Krennic.

She was taken in by Saw Gerrera and raised as his daughter. He shielded her from the worst of his people’s actions, but she was still trained for battle by Saw’s Partisans. She ran missions with them. She saw people struck down in battle. She witnessed the atrocities the Partisans committed in the name of rebellion. She saw her friends die.

And just as she had felt abandoned by her own father, Saw Gerrera abandoned her too. At merely sixteen, Jyn had to find a way to fight to survive on her own. Even then, she was met with nothing but tragedy. She found a new home thanks to the hospitality of Akshaya Ponta and even found friendship and romance with the pilot’s son Hodder.

When war arrived on Skuhl, Jyn was separated from Akshaya and Hodder — which ultimately saved her life but led to their deaths.

Everyone that Jyn Erso has ever cared for or loved has abandoned her or died, but she still rises to the occasion and sacrifices her own life so that others might live. Rogue One is already a tremendously heavy film with the knowledge that everyone we will come to love over the course of the film will ultimately die, but that’s what makes the film what it is. It shows the real cost of war.

Jyn Erso embodies so much of that strife because she has been through hell and she refuses to go down without a fight. She, just like Cassian Andor, understands the cost of the rebellion. It’s not just a physical cost, but an emotional and mental one too.

We have had strong women who were diplomats, expert negotiators, figures of hope, and ace pilots, but there is a rawness and realness to Jyn’s story that packs a heavy punch. She isn’t perfect. She’s broken and damaged, battle-hardened and war-worn, she’s lost and lost, and yet she actively chooses to make a difference.

She steps up in a life-or-death scenario and leaves an impact on the world, even if she doesn’t get to be there to enjoy it. Without the actions of Jyn Erso, Cassian Andor, Bodhi Rook, Chirrut Îmwe, and Baze Malbus — the Rebellion may not have survived against the Empire’s forces.

Saw Gerrera is one of my favorite Star Wars characters and I love that Jyn follows through on his request: “Save the Rebellion. Save the Dream!”

While I am incredibly excited to see the Andor series, I secretly hold out hope that Cassian and Jyn crossed paths years before Rogue One. Jyn had so many aliases and criminal exploits, and we know the galaxy is remarkably small. I just want to see a glimpse of her.

I’ll never forget the way that I felt when I came out of Rogue One. It was December 2016, a month after a heartbreaking election cycle. I felt hopeless. Hopeless in a way that I had never felt before. I feared for my friends. I feared for policies that could take away their human rights. I feared for my country and the path that there was no coming back from. I had thrown up my hands and given up, but then I saw Rogue One.

I saw myself in Jyn Erso almost immediately. Jaded, exhausted, and ready to turn my back on “the Rebellion” because it didn’t feel worth it. As I watched Jyn’s emotional journey throughout the film, her resilience and drive to do the right thing — no matter the cost — set a fire within me that hasn’t gone out yet.

Best NFTs to Watch on the Polygon Network