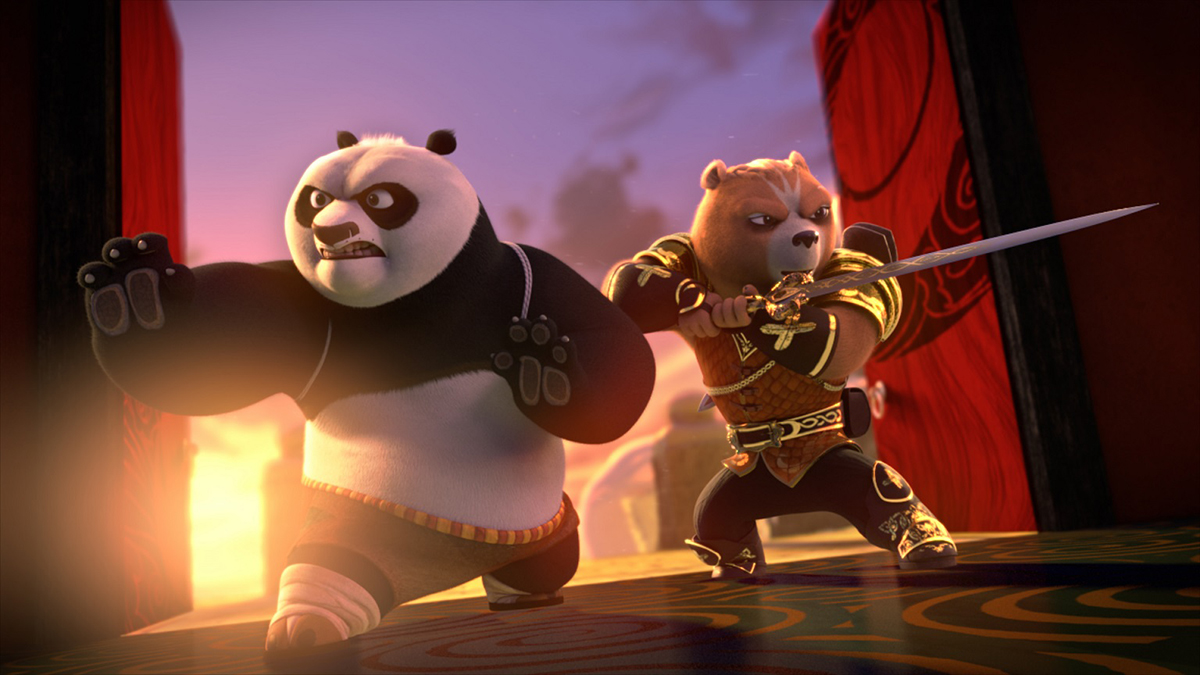 Kung Fu Panda has become an iconic franchise with several movies and television series. Fans all over the world have fallen in love with Po, an underdog panda who can also kick some serious butt, and his group of misfit friends. In the new Netflix series, Kung Fu Panda: The Dragon Knight, a mysterious pair of weasels set their sights on a collection of four powerful weapons – and it is up to Po (Jack Black) and a no-nonsense English Knight named Wandering Blade (Rita Ora) to stop them.

This marks Jack Black’s return to the franchise, which will have fans everywhere thrilled as he embodies so much that is Po. During an interview with the Executive Producers Peter Hastings and Shaunt Nigoghossian, we discuss working with Jack Black, the importance of family entertainment, and even the possibility of a second season.

When asked about having Jack Black as part of this show, both EPs had nothing but great things to say.

Shaunt explains that visually Jack Black gave the animation team a lot more to work with than a normal actor who just comes in and says his lines and then leaves does. “We have to do like 100 more poses, which is way, way, way harder, but it just makes everything so much better,” he confesses.

He also says that Black really hits emotions well. “You can hear the crying. You can hear the sadness, and it tells you [for example] this room HAS to be dark. We can't use sound; we can't use music. We just got to let him talk.”

When it comes to personally working with Jack Black, Peter Hastings says that it's super fun, because he just is Po. “He's nice. He's not really putting anything on, it's pretty much the same as hanging out with Jack. So that's fantastic.”

As a voice director, it is Peter's job to make sure that the actor knows what is happening and to understand what the moment is. “Very often, I would get to the point where I'm like, okay, good. Let's move on. And he would go, let me do one more, let me hit it, and let me hit it hard. Then he would do another take, and very often that was the keeper that ended up in the show.”

Improvisation is something that Hastings always encourages in his actors — some accept the invitation and some don't. He explains that Jack Black certainly does, which is probably no surprise to those who know him. Hastings says that there are a lot of times where Black will finish saying the line that is on the paper, but then just keep talking and talking, and sometimes that is exactly what the show needs.

Shaunt jokes, “That's when you're like, well, I guess the scenes going to be like 12 seconds longer, but it's pretty dang funny.”

The Importance of Family Entertainment

Kung Fu Panda has always been a franchise that parents and adults can enjoy along with children. When it comes to family entertainment, there are far too many shows that just aren’t entertaining for the adults as well. When asked about the decision to make The Dragon Knight a show that everyone can enjoy, both EPs expressed the importance of this.

Shaunt Nigoghossian explains that he personally has lived through this. “I remember at some point when Penguins of Madagascar came on, and it was like, Oh, finally, I can watch a show with my kid that sometimes when my kid's not here, I'll still watch it.”

He says that it’s super important to him to create a show that everyone can enjoy because we have all been there. “We kind of think of [Kung Fu Panda: The Dragon Knight] as a movie. Just one big long movie. That's how we're looking at it. We're making it look like a movie. We're making it feel like a movie. We're playing out the action sequences a little more deeply and all that. So it's meant to be for adults, and also enjoyable for kids.”

For Peter Hastings, he has never worked on a show and separated it into for kids, or for adults — he just wants to make something that is for people, even though he knows that is a high bar. “I think there's a question of how deep or dark can you go, that it's still appropriate for kids, and it's really just about, you can go anywhere — just don't make it inappropriate for a kid.”

He goes on to say that he has always thought to himself how he can catch a parent’s attention as they walk through the room. “The simple way is some sort of adult joke or reference only an adult would get, but really, it's just by producing something of very high quality. The driver so often is an emotional core.” Hastings feels that the best way to hook someone is to put something relatable up on the screen, and he isn’t wrong.

Leaving the Door Open for a Second Season

Kung Fu Panda: The Dragon Knight season 1 is one cohesive story, that wraps up well in the end, but still leaves the door open for more. It is sure to be a big hit with fans, so we asked if there is any possibility of a second season, and if there’s a direction they would like to go.

Peter Hastings explains that it was important for them to make sure there was an ending to the season, but also that they left room to be able to continue the adventure. “It wasn't… This is kind of a thing in modern TV, where it's like you spend the whole show going, what's going on, what's going on? And then the season ends and you're like, wait a minute, too many unanswered questions. I think we got to a really good resolution at the, at the end of the season. But there's an open door there for more stories, there is a lot to explore.”

Shaunt expresses his excitement to further explore the world as well. “We have the possibility of going all around the world if we want to if we continue. Think about all the different animals that live in different places and all the different styles we can use. It's exciting.”

How to fix Roblox Some Studio Files Are Missing error?