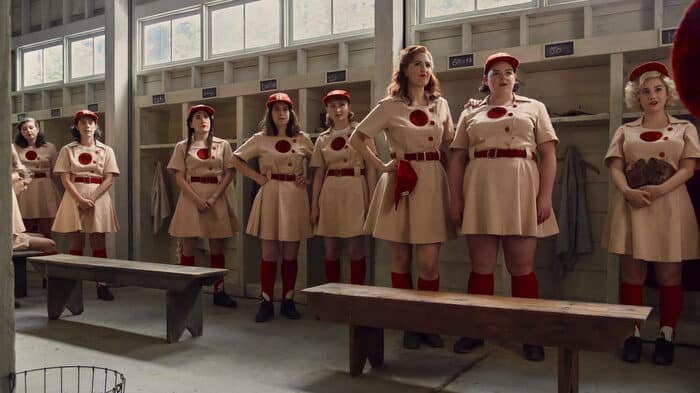 A League of Their Own is a film that almost instantly became a classic. It was the first female sports movie, and it holds up to this very day. Not only is it an inspirational film for women everywhere, but it is entertaining all the way through. Now a reboot series is coming to Prime Video and while it is about the same time period, it is a whole lot less about the game of baseball, and a whole lot more about LGBTQ+ rights.

This series features a whole new batch of Rockford Peaches. They wear the same skirts and play the same game when the men go off to war, but this time they are dealing with more than the blowback from the men who don’t want to see them playing America’s favorite pastime. Not all, but many, of these women are dealing with an internal struggle.

So, while yes, A League of Their Own is about the women of baseball and their whirlwind season, it is also about these ladies and what they are going through. Abbi Jacobson plays Carson Shaw, whose husband is in the war. She has always loved the game of baseball and is thrilled to finally get a chance to play in a professional setting. But joining the team changes her and allows her to finally be herself when she finds comfort in the arms of another player, Greta (played by D’Arcy Carden).

The Peaches are told that they must still behave like ladies, even though they are playing a man’s sport. Their uniforms have skirts, they are told to wear makeup, and they must always be on their best behavior. The women are not allowed to drink in public, must always have a chaperone with them, and are even fined if they opt to wear pants.

At the same time that the women of the Peaches are dealing with this, a young Black woman named Maxine (played by Chante Adams) is also keeping a similar secret. While a lot of her storyline deals with her struggle to be accepted as a baseball player, she has the added wall of her skin color. She knows that she will have to play in the Negro league, but she is unwilling to give up. At least at the start of the series.

There's No Crying in Baseball!

The first half of the season is very much meant to set up for some big twists and reveals toward the end of the season, but that doesn’t stop it from being a bit of a struggle. These are long episodes and while they are entertaining, for the most part, the ball doesn’t really get rolling until episode five. This is when things get so interesting that it is nearly impossible to look away. There is a whole lot of drama, more than ever expected, and it all culminates in a truly epic finale and quite the cliffhanger moment.

Both the film and the series are based on true events. During the war women really did play baseball. While the movie is certainly entertaining, the series feels a whole lot more truthful to the times. It is mentioned in the series at one point that a large percentage of the league is a part of the LGBTQ+ community but is forced to keep it hidden. This is likely a whole lot closer to how things were in the real life of these women.

A League of Their Own drops all eight episodes of Season 1 on Prime Video on August 12th. Be sure to binge it right away so that we can be guaranteed a second season. Trust us, after that cliffhanger ending, you will be begging for more!

Review: I Am Groot Mines Sassy and Sweet