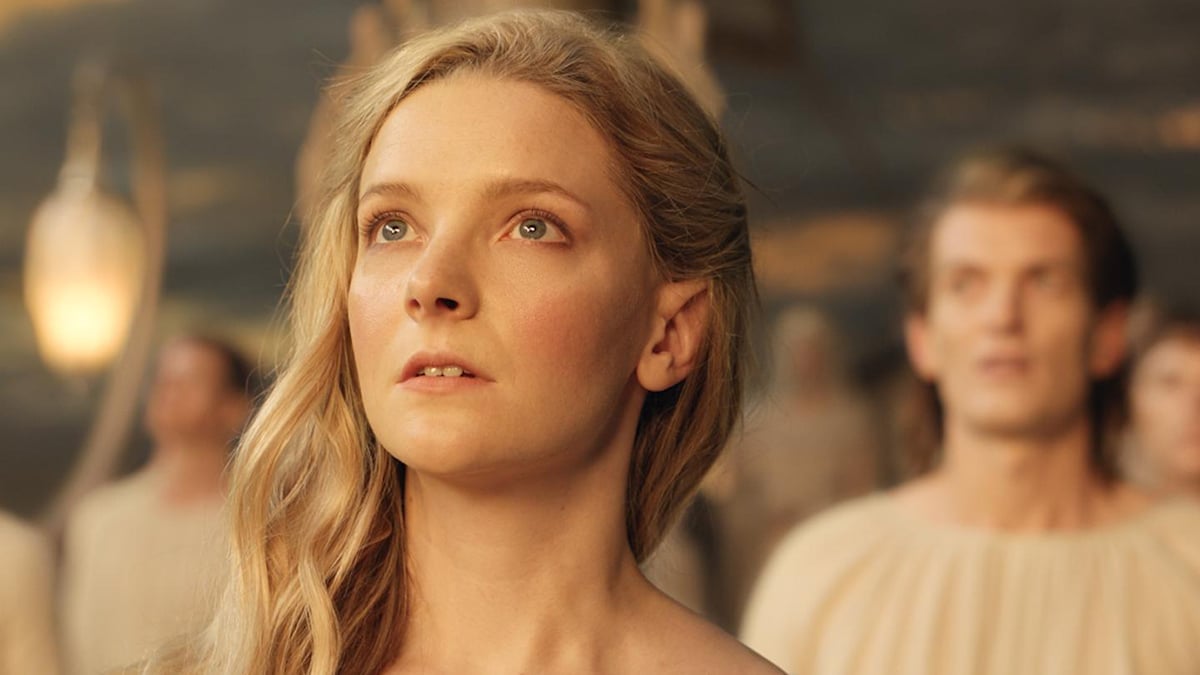 “Even before the first sunrise, there was light in the world.”

The first episode of Amazon Prime Video’s Lord of the Rings: The Rings of Power opens with a young Galadriel fashioning an origami boat out of paper. She soon sets it afloat as other literal Elfin children tease and mock her. One boy in particular sinks the ship, bringing her righteous anger to the surface even at such a young age.

Warning: Minor spoilers ahead for the first two episodes of The Rings of Power.

The impending brawl is halted by the appearance of Galadriel’s older brother, who explains that rocks sink in water because they are focused on the dark beneath them, while boats float because they focus on the light. Then Galadriel asks a very important question about how to judge the better between two lights. We don't hear the answer, but we’ll soon learn.

From there, the show launches into a very effective sequence of shots, combining maps and grandiose images (mostly of Australia and New Zealand) that give us nearly a millennia of history – when the darkness of Morgoth comes, the elves leave their homeland of Valinor (the Undying Lands Bilbo and many of the Fellowship will one day journey towards) and set out across the Sundering Seas to a land called “Middle Earth.”

There they fight evil, in the form of Gondor, Orcs and the wizard Saruman. Complete with dragons. The elven elders predict the battle will be a brief one. They are wrong. For hundreds of years, the elves fight against evil, and believe they have finally brought about its end – that’s the official line anyway. Later we’ll learn that it was a lie told with the best intentions – and we all know where those lead.

But before that reveal, we see Galadriel mourn the death of her brother, and take up his mantle as battle chief – finally leading a group of Elves into the frozen northern wastelands, in search of Saruman, whom she believes is still out there. After a battle with a snow troll in Barad-dûr, her platoon rebels, forcing her to abandon her quest and return to the High Elf King.

History in the Making

There is a lot going on in the first couple of episodes of The Rings of Power. The first half of the first episode is mostly explaining the First Age of Arda – bringing us to Middle Earth. Ostensibly, the Second Age begins with the King anointing Galadriel and her warriors with crowns and rewarding them with a return to Valinor.

Galadriel accepts that, at first, even though she argues with a young Elrond prior to the ceremony that he apparently scripted. Of course, we know from the novels and the films that Galadriel does not stay sidelined.

The two episodes do a great job of introducing even casual fans of the stories to this new, pre-Hobbit world. Which, yes, includes pre-Hobbits – Harfoots, diminutive, Leprechaun-like predecessors to the denizens of the Shire. Tolkien famously said three smaller races would eventually merge to form Hobbits, but that they were not involved in major events. The show appears to contradict that a little at first, but in a way that makes sense that their contributions would be lost to or hidden from history.

We meet men, who don’t trust elves, despite the elves coming to defend the men’s homes against the orcs and Morgoth. Perhaps it is the ongoing surveillance the elves have over the lands of men – giant watchtowers that we have seen remnants of.

The Mines of Moria

The dwarves don’t pop up until episode 2, but they are worth the wait. Elrond journeying to Khazad-dûm and invoking an ancient rite to gain entry is powerful and painful – showing both the difference in judging time between elves and the rest of the world, and foreshadowing the fallout between the races at the end of the Second Age.

While you don’t need to know the annals of Middle Earth lore to enjoy Rings of Power, there are plenty of Easter eggs and hints – and perhaps red herrings? – sprinkled in the episodes for the dedicated fans to ponder over. The High King sends Elrond to work with Celebrimbor to create a forge that burns hotter than any ever before.

The Dwarven king worries that the Elves might have gotten word of their deepest secret – a wooden chest that has a glow emanating from it, a la the Pulp Fiction briefcase. There are corpses of Orcs encased in the walls like Han Solo in Carbonite at Barad-dûr that Galadriel blames on playing with dark, powerful forces – as she uncovers the Orthanc sigil on a snow-covered blacksmith’s forge.

It’s the same mark that was burned into her brother’s shoulder. Later we see that sigil burning with human blood, hinting that its bearer might be one of the “mortal men doomed to die.”

And, of course, as the High Elf King declares that we are entering a new age of peace – a fiery light appears in the sky – a meteor or similar, streaking across the sky, from Valinor to Middle Earth. As he watches it, the High Elf King looks down to see the Lorien leaf in his hand turn black with contamination.

And finally, the meteor slams into the ground, not far from the current Harfoot encampment (they are nomads, who hide from most ‘gianter’ beings). It is witnessed by young Nori Brandyfoot, who sees a mysterious bearded giant in the crater of the collison.

The first episode ends there, but with plenty more to come. The Mysterious Stranger Nori sees and then tries to help is almost certainly, if not someone we know by name – he can’t remember his – one of the Maiar.

Along with meeting the dwarves, we also witness an unusual human-elf relationship, leading to an underground investigation. Galadriel encounters Halbrand, a human from the Southlands that is likely a royal ancestor, if you get my drift. And we see a few more pieces that may or may not fit together to prove a dark force is still very alive in Middle Earth – and may have contaminated other realms of Arda.

Only time will tell. And, after all, even though Amazon Studios is working almost entirely from appendices in Lord of the Rings, they do have a few hundred years to cover.

It should also be noted that, apart from some scary battle scenes, Lord of the Rings: The Rings of Power is much more family-friendly than that other show with dragons and fantasy battles that just debuted.

Lord of the Rings: The Rings of Power debuts on Amazon Prime Video starting September 1.

Hacks to Keep Your Train Trip on the Right Track

5 Things You Can’t Do with Bad Credit