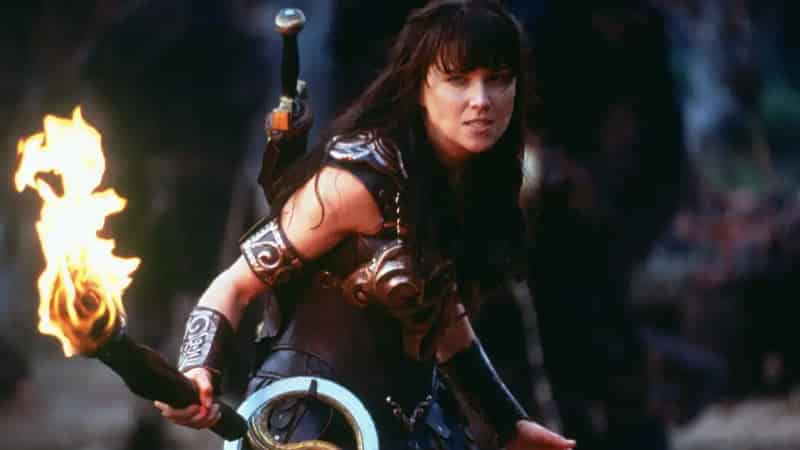 Did you wake up this morning and wonder why everyone was discussing Xena?

The internet is often a wondrous place of confusing trending topics and throwbacks, so you might be scratching your head at this one. But Xena is trending for a very specific reason. Xena: Warrior Princess may have been off the air for 20 years, but last night she put Hercules in his place and the internet rejoiced.

Lucy Lawless has always been a personal hero of mine. I grew up, like many children of the 80s/90s, obsessed with Xena: Warrior Princess. I wore out the tape of the animated Battle for Mount Olympus movie. I had action figures of Xena purchased from a long-forgotten KB Toys. As a kid, I looked up to her because she stood up for what was right, tolerated absolutely no nonsense, and was a powerful female character. It brings me tremendous joy to say that Lucy Lawless is all of those things in real life too.

No, Peanut. They are not Patriots. They are your flying monkeys,homegrown terrorists, QAnon actors. They are the douchebags that go out and do the evil bidding of people like you who like to wind them up like toys and let them do their worst. #keepingYourFilthyHandsclean #enabler

Lawless’ takedown was in response to a tweet Sorbo shared, pushing a right-wing conspiracy about the domestic terrorists that broke into the U.S. Capitol on January 6th. He has gotten into hot water in the past for his political ranting on Twitter. This isn’t new, but it is no less disappointing that he uses his platform to push conspiracy theories and science-denying propaganda. Which is ironic since Lawless is a climate ambassador with Greenpeace and has been an active participant in numerous protests over the years.

When she’s not verbally taking down Hercules on Twitter, the New Zealand actress is putting her activism into action. She was even arrested for her activism in 2012, when she and other Greenpeace activists were arrested in New Zealand while protesting oil drilling. She’s also an outspoken LGBT+ ally and advocate.

If you’re looking to stream Xena: Warrior Princess today to celebrate her herculean takedown, I have bad news for you. You’ll have to pay-per-episode on almost every site that the series is available on. At some point over the last year, the series vanished from the SyFy and NBC apps, where it was previously available to stream.

If you’re looking to watch some Lucy Lawless today, you can however stream Parks & Rec on the Peacock app. Lawless had a recurring role in the series in seasons five through seven. I also highly recommend Starz’s Spartacus: Vengeance and Spartacus: Gods of the Arena, as well as Salem, which is available on Hulu. Lawless had lead roles in both series.

While Xena: Warrior Princess may be incredibly difficult to track down for streaming purposes, you can watch a baby-faced Ryan Gosling (aka the unproblematic Canadian Hercules) in the singular season of Young Hercules over on NBC’s Peacock app.

During a bleak first week to the new year, Lucy Lawless managed to be a bright spot with her candid dedication to truth. If you need a good chuckle, take a scroll through her Twitter feed as she and others celebrate her snarky reply. You won’t be disappointed.

Our Plan To Increase Business Revenue