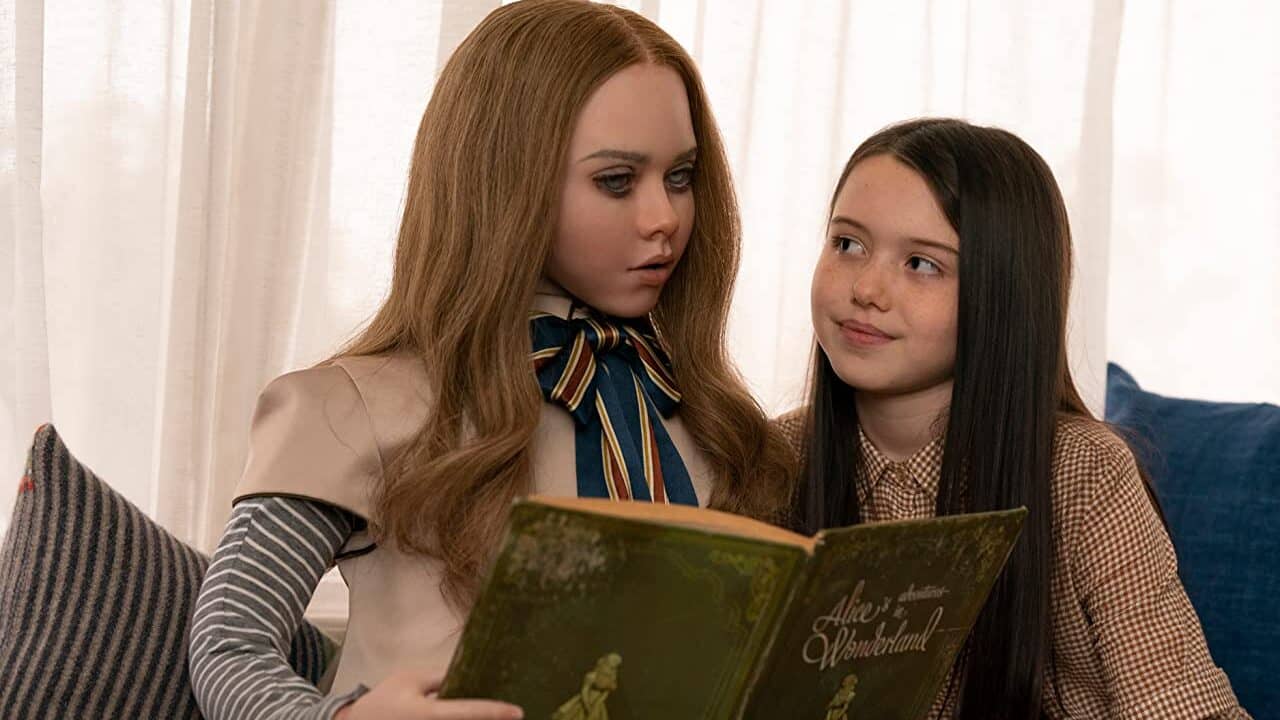 Only a few movies can claim to have not one but two great opening scenes and M3GAN lands among those few. The film opens with a fake toy commercial that immediately sets the joyously irreverent tone for the rest of the movie before introducing us to a family struggling to drive up a snowy mountain. The tween daughter plays with the toy we just saw in the commercial while the parents argue about snow chains and screen time when suddenly a snow truck appears like a monster out of the impenetrable snow.

It’s a brilliant one-two-punch opening that not only sets the tone but also introduces the audience to the multi-genre mix of the film. M3GAN is operating as a sci-fi horror comedy that meshes its three genres so well there are never any seams between them, but also allows each of the best of these genres to shine on their own.

M3GAN tells the story of robotic toy maker Gemma (Allison Williams), who takes in her niece, orphaned in the second opening scene, Cady (Violet McGraw). Equally desperate to create something that will impress her bosses and help Cady recover from the loss of her parents, Gemma creates M3GAN (an acronym for Model 3 Generative Android).

At first, MEGAN is a godsend; the machine learning capabilities Gemma hardwired into the robot are helpful in providing Cady a play companion and keeping the girl well-behaved. But, of course, this idyllic family of aunt, niece, and robot encounters challenges from outside and within.

The film’s narrative beats may not be very original, but they are all well done with side-splitting jokes in every scene. And though the story structure is familiar, Cooper injects the film with a series of fabulous surprises that are too good to give away here.

No Skimping on Genre

Along with the jokes in the dialogue and often absurdly hilarious surprises, M3GAN includes the requisite nerve-shredding suspense and brutally violent scenes of a modern horror movie. But the most affecting and genuinely anxiety-inducing horror in the film isn’t found in its horror setpieces but rather in the building horror of what is happening inside M3GAN’s artificial mind.

There’s a real sense of foreboding as Johnstone shows closeups of the robot doll’s face taking in everything around her. Almost every conversation between Gemma and Cady in front of M3GAN feels like it’s creating a more warped worldview for the artificial friend. Of course, because this is a horror movie, we all know where it’s leading, but there are still questions of exactly how M3GAN’s rationales will get us there.

And that’s where the film does its best work as a science fiction film. There are explicit conversations between Gemma and the doll about death and the meaning of wrong that would feel perfectly at home in a more philosophically-minded movie. But M3GAN isn’t interested in philosophy so much as fun. These conversations highlight that the filmmakers aren’t ignorant of those avenues available for exploration and are actively choosing to make this the most fun movie it can be.

In the last few years, we’ve been blessed with horror movies, from Malignant to Barbarian, built around absolutely giddy surprises, and M3GAN joins their ranks. It’s a testament to the filmmakers that M3GAN manages to be as wonderfully surprising as it is. There are moments here that will shock audiences with their brutality and others that are so ridiculous and ridiculously unexpected that they’re likely to be memed for years to come. It’s a film that’s a delight from start to finish and can only be made more wonderful by a boisterous crowd willing to take the wild ride the film offers.

We've got the latest on all the movies in theaters now!

“New COVID” Is Here, Are You Ready?