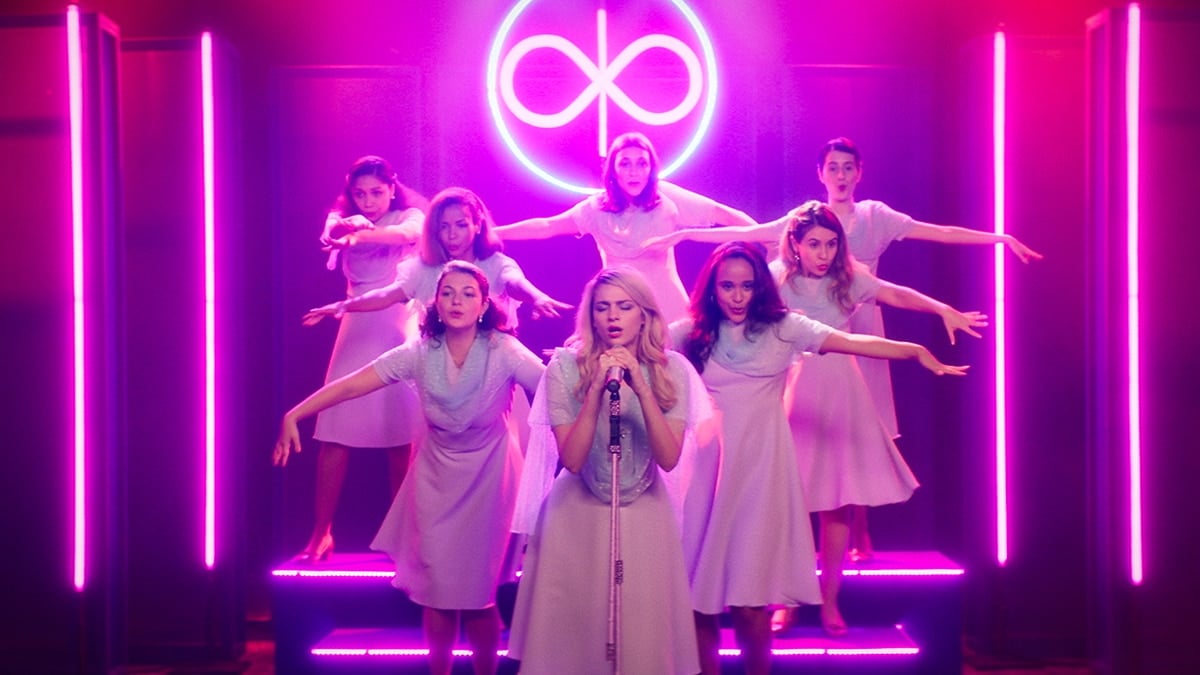 The Brazilian feminist horror fantasy film Medusa may be about another woman who discovers just how much the patriarchy she serves and upholds doesn’t care about her once she’s rendered unsuitable for their purposes. But don’t write it off just yet.

It’s a precarious balance to hold complicit women accountable while retaining sympathy for them. Anita Rocha da Silveira never loses sight of either goal, even if it comes somewhat at the expense of the plot, which in the movie’s second half corresponds more and more to her female characters’ emotional reality rather than a physical one.

The movie even starts with a familiar sight: a woman walking home alone at night and being taunted with familiar sexist slurs. That either of these scenarios rings so familiar is disturbing enough, but what will really cause discomfort is that those dishing out the verbal abuse is a group of masked women.

After forcing their victim to promise to be devoted, virtuous, and submissive to the Lord on camera, an even more familiar trope is employed – a badass song with a group of devoted female friends striding powerfully through the street. But these women are using the power of their sisterhood to devote themselves not to each other but to the patriarchy.

Mariana (Mari Oliveira) may not be the girl boss of the group, but she’s close friends with the designated leader Michele (Lara Tremouroux), a bubbly blonde who also leads them in their church’s singing group, “Michele and the Treasures of the Lord.”

They seem to have all the answers in their carefully controlled world, but much like Hilary Faye in the 2004 satire Saved!, the weight of expectations is beginning to break them down. Even if easy answers are just as easily provided, such evangelical fanaticism is going to conflict with everyday reality sooner or later.

Unlike Saved! or other such media, the catalyst for Mariana isn’t a pregnancy or sexual violence, but one of her group’s late-night targets fighting back enough to give Mariana a scar on her face. Such a small development, yet it’s enough for Mariana’s stock to go down as it were, for the grotesque clients at the surgery clinic where she works to find her repulsive, to be declared an unworthy woman for her cover story of walking home alone at night, and to be generally regarded as less valuable for her lack of physical perfection.

To cope, Mariana discovers a new purpose: to find Melissa, an actress who vanished from the public eye after her face was set on fire by a so-called holy woman for her perceived sins. Going undercover at her rumored location, a hospital ward for impoverished comatose people, Mariana slowly begins to unravel mentally and physically as the hospital’s aura of unsettling secrecy punctures her repressive shell.

Media centered on conservative women have often been more interested in portraying them as outright victims, which was proved by the lackluster Mrs. America and Bombshell. Medusa is invested in showing their pain, often in neon pink and candy-colored settings that could give Nicolas Winding Refn a run for his money.

Still, Medusa is thankfully uninterested in punishing and condemning its heroines for their flaws.

Anita Rocha da Silveira doesn’t exactly go easier on them; there’s just an awareness in Medusa of how repression leads to rage and the chilling ease with which women would rather vent it on each other rather than the architects of it, those who make monsters in the first place.

Even Michele, who supposedly embodies blonde perfection, eventually reveals her bruises, which are more directly tied to her partner, a leader in the male equivalent to the Treasures, a chilling group of paramilitary youths with even less reason to question their beliefs.

Why would they, when their way of life offers even more power, convenient targets, and no reason to question their supremacy or actions? In Medusa, women are declared monsters at the drop of a hat, but there is no male equivalent to the monster of the title, perhaps because the kind of gendered horror men inflict is so deeply and violently ingrained in our culture.

And in a place where people are coping with an increasing lack of resources by turning to the monsters with no name, sometimes you just want to let it all out and run screaming through the streets with your girls. Damn right, hysteria is contagious.