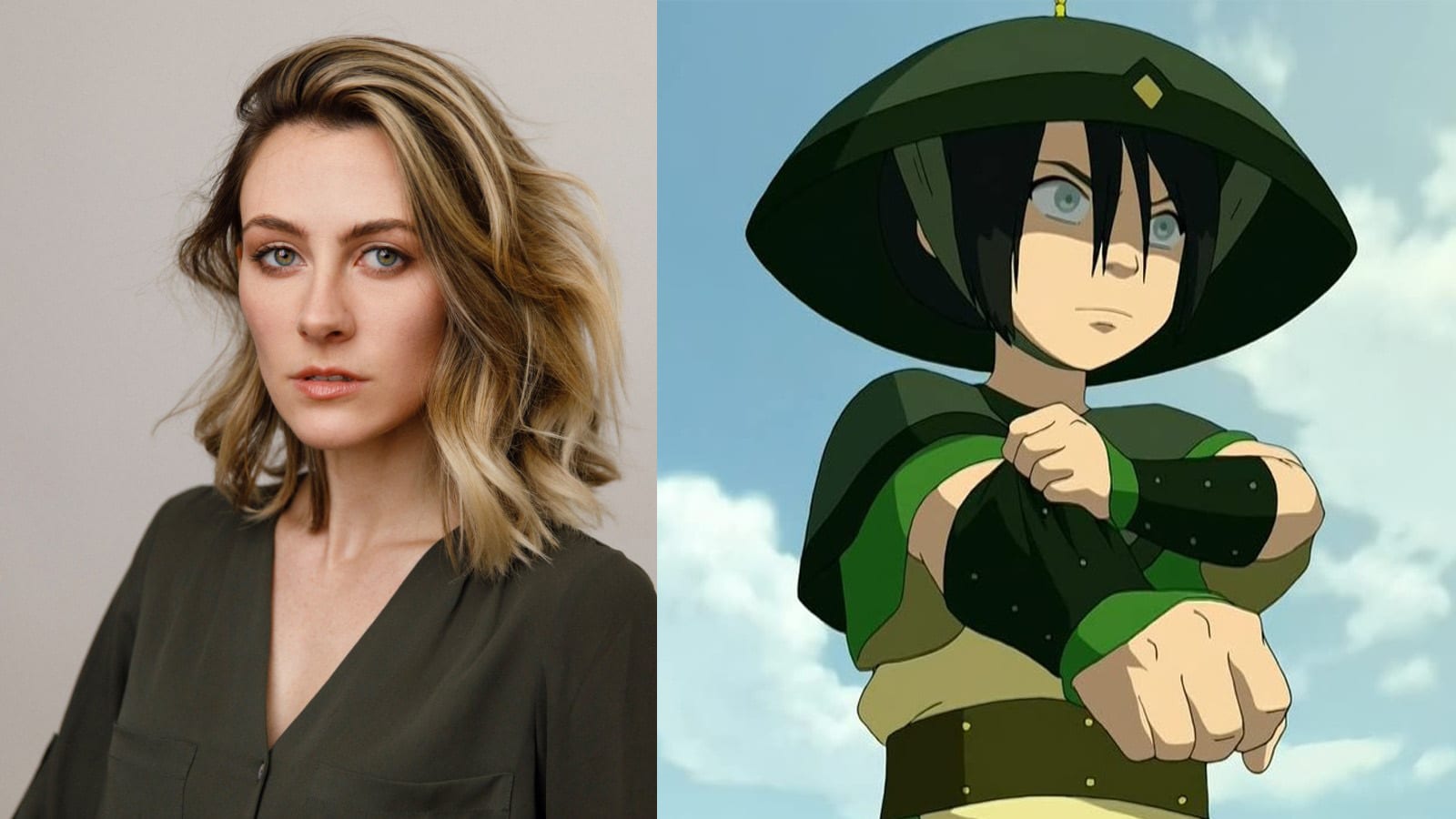 Fans of Avatar: The Last Airbender can now interact with their favorite animated series in a new way. Michaela Jill Murphy, the voice of Toph in Avatar, partnered with Hyype Space to create opportunities for fans of the Nickelodeon show to win exciting prizes.

Hyype Space is a social media challenge app where fandoms come together by creating and submitting videos for a chance to win the monthly challenge. Whichever video receives the most applause can win cash or a fabulous Avatar-themed prize, like a signed poster or Toph Funko Pop.

Michaela Jill Murphy, talented voice actor and Hyype Space influencer, joined us at Wealth of Geeks for an interview. We talked about everything from the upcoming challenges she's hosting on Hyype space, to her love for voice acting, to her current creative projects.

Maya Capasso: When did you start acting professionally?

Michaela Jill Murphy: I think I was six. I was very young. I started in musical theater and did a couple of local productions because my mom was like, “Let's make sure you're really into this.”

Then I started doing commercials. At the time, I could walk into agencies, hand them my headshot, and be like, “Hello, are you interested in representing me? I would love to work with you!” It was nice to be at the end of ‘Old Hollywood.' Like, my first headshots were black and white.

MC: What was it like to play Toph, the all-time best Earth Bender in Avatar: The Last Airbender?

MJM: It was pretty great. Anybody in the show will tell you that we did not know how popular it would become. So it was very cool. I got to be a lead character after doing so many additional voices for so many years.

And the concept is so cool. The elements — air bending and fire bending. It was so cool. I often say that I'm very similar to Toph and that I'm very stubborn and opinionated, and I think I can do everything by myself. So when I was voicing her, I was like, “we can do everything by ourselves! independent women! Yeah, this is great,” which is funny.

It was a lot of fun to play a lead character. Her humor is laced throughout the series. She's always cracking jokes about her blindness or casually saving everybody's lives. It was awesome to be a consistent presence in a series instead of just hopping in for an episode or doing some background stuff, which I love doing. But it was cool to play such a fierce, badass main character.

MC: What's your favorite thing about Toph as a character?

MJM: My favorite and least favorite thing about Toph is her tenacity to stick to what she feels is best. That's probably what gets her into so much trouble, but that's also what makes her such a rock. [Michaela laughs] Get it? Earth bending!

So many fans have come up to me who are younger girls or disabled people — they come up to me and say, “Yo, this is, like, the first character I felt like did not demonstrate her disability as a weakness. She is very much still her own person. It was a nice inspiration to have as I was growing up.” So I admire Toph's tenacity to do her own thing regardless of everybody else's expectations.

Finding a Love for Voice Acting

MC: What do you love the most about voice acting?

MJM: Nobody can see you! [Michaela laughs]. But seriously, it's one of the reasons I think I did so well with voice acting when I was younger. Being on screen or the stage can be so intimidating. So it was nice to feel like I was in a cocoon creating the character.

As I've gotten older, I'm more comfortable with the in-person stuff, and I enjoy being on stage and on screen. But there's something pure about creating your voice for your character when you're tucked in that booth.

You have your headphones on, and there's no other sound. And so it's just about communicating with audio. So there's something cool about that because you have to make sure that the intention comes across solely through your voice.

The Hype Around Hyype Space

MC: Can you tell me a bit about Hyype Space? What is it, and what makes it so fun?

MJM: Yeah, sure! Hyype Space is a challenge-based app. So it's about creating challenges and submitting your own videos to participate in those challenges for the chance of winning prizes. The great thing about it is that it's purely positive. You can't even comment on people's video submissions. There's no dislike button. The only thing you could do to interact with submissions is to “clap” or “thunderous applause.”

This feature was created to remove the bullying and negative aspects of social media to encourage people to put themselves out there. When Hyype Space reached out to me, I was like, this is cool. Especially with Avatar fans and convention fans, the people I meet, it's a great way to engage with our community a bit more.

For example, the first challenge we did this last month was the bending challenge. That could be whatever your imagination came up with. Like if you wanted to be a fire bender and hold up a couple of lighters, you know, safely. [Michaela laughs]

And some fans do martial arts. A couple of fans submitted full martial arts sequences, which is really cool. Hyype Space makes being a fan extra fun and interactive. Something beyond watching the show and talking about it online. It's a safe, positive space to be like, “Yay! Let's have fun and enjoy this thing together.”

There are some prizes attached to challenges which are a little kick in the butt for fans to submit if you're like, “Well, maybe I don't know if I want to do this. But maybe I could win a cool signed poster or win a couple hundred bucks or something.”

MC: Can you tell me about your upcoming challenges on Hyype Space?

MJM: Our current challenge is focused on Halloween. So we have a spooky spirit flash challenge where people can share decorations, costumes, and that sort of thing.

Coming up in November, we have a scene challenge. I'll probably let users pick their favorite scene or moment from Avatar and reenact it. They could do a monologue or perform with a friend. Fans can get dressed up in cosplay or do their hair—anything to make it come alive while they reenact their favorite moments from a favorite episode.

I'm expecting a lot of scenes from “The Tales of Ba Sing Se” and maybe some serious moments from “Zuko Alone.” So this one is an acting challenge for November. I'm excited to see what people do!

MJM: for anybody who is interested, you can download Hyype Space on the App Store or Google Play. We should have active challenges going on every month. So if you want to participate and win some prizes, we welcome you! Come on over and join the fun.

MC: I heard you're traveling to many comic cons this year to meet your fans. Where are you headed next?

MJM: Yes, I am. There's been so much travel happening this last year. The Avatar love has opened up the convention world for me. I'm relatively new to it. It's been a little over a year now since I really started going to them.

I've been traveling a lot, which is awesome. I'm headed to Woodlands, Texas, and then Indianapolis, Indiana. Then I'm going to Pasadena and Dallas, and then I'm going to be in Las Vegas. I think I have five left this year. I post lots of highlights on my Instagram @MichaelaMostly if you guys want to check it out.

MC: How do you stay motivated in such a competitive industry?

MJM: What keeps me motivated is the idea that I get to be in charge of my own life. On the one hand, it's up to others if they want to cast me or if they want to collaborate with me on something. However, it is then up to me to keep reaching out or to update my scene work and my demos on my website.

It's up to me to post on social media and decide to do the collaboration with Hyype Space and work on building something new. I have the time to do that instead of having to report somewhere at 8:30 A.M., be on a call, and then do some spreadsheets for somebody else.

The stability of that life is tempting at times. I have many friends from college who are lawyers and in med school and all that stuff. I think about it for a split second every now and then. But then I think: No. I would just be doing it for the stability, and I don't think I would actually be happy. So what keeps me motivated is the fact that I get to be in a creative space.

MC: Are you currently working on any new creative projects?

MJM: Yes. I can't tell you the specifics yet, but I just finished working on a video game that's set to come out next spring. I'm a main character in it, and it was a lot of fun. Keep an eye out!

I majored in screenwriting in college, so I'm working on a TV pilot and putting together a pitch for the first time. I went to Yale, and I loved Yale. They were great, but they didn't tell me how to put together a pitch packet or anything like that. So I'm trying to figure it out from friends and peers in the industry. So yeah, I have a video game coming out this spring, and hopefully, I'll be selling a pilot. We'll see, We'll see!

This interview has been edited and condensed for clarity and length.