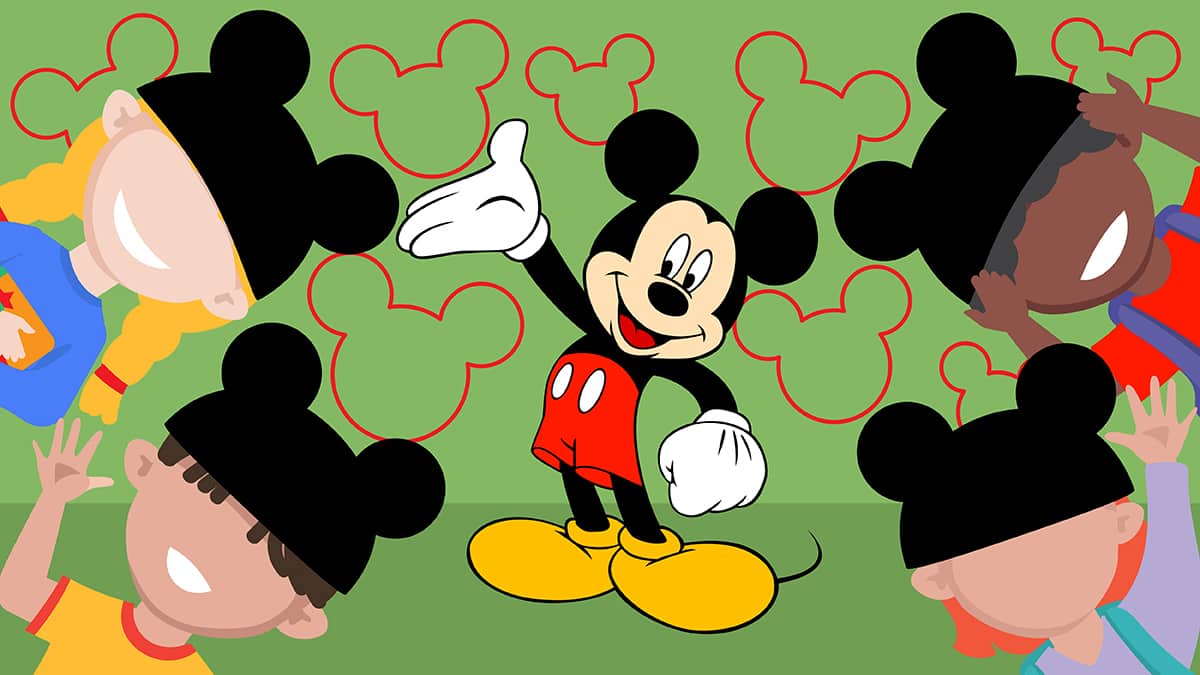 You've probably heard that many celebrities got their start in The Mickey Mouse Club. However, if you've never seen the show itself, we don't blame you! MMC first aired way before the internet, though it had a short social media comeback in 2017. Regardless, there is no better time to catch up! This post will cover everything you need to know about The Mickey Mouse Club, including a list of Mouseketeers that the show catapulted to stardom.

What Is the Mickey Mouse Club?

Long before there was Hannah Montana, Wizards of Wizardly Place, Lizzie McGuire, and Tricked, Disney aired The Mickey Mouse Club as a means to finance Disneyland. It was an hour-long afternoon variety show featuring a cast of young kids and teens known as “Mouseketeers” who donned the famous Mickey Mouse ear hats. The cast performed skits, comedies, and musical performances.

Some cast members like Darlene Gillespie and Annette Funicello also starred in dramatic serials. For instance, the popular Hardy Boys starred Tim Considine and Tommy Kirk. Other major serials include Spin and Marty, Corky and White Shadow, and Annette. Of course, there were plenty of Disney cartoons.

There were different themes each day:

While many think MMC started in the 90s, it was, in fact, during the 1950s when the show first aired. In its debut, the show introduced 24 cast members, ranging from nine to fourteen years old, and one adult Head Mouseketeer (Jimmie Dodd, who shared wise and inspirational quotes at the end of the show). Roy Williams or “Big Mouseketeer” also appeared.

The MMC had four runs:

Fun fact: MMC had color-coded teams. There were white, blue, and red. The Red Team consisted of Mouseketeers like Karen Pendleton, Bobby Burgess, Doreen Tracey, Cubby O'Brien, and Lonnie Burr, who appeared throughout a run.

Other cast members who existed only an episode or more were in the White or Blue Team. Don Agrati (who later changed his name to Don Grady when he starred in My Three Sons) and Sherry Alberoni were Blue Team members.

By the 1970s, Disney rebooted MMC and renamed it The New Mickey Mouse Club. The revamped show featured a more diverse cast of Mouseketeers. Unlike the original MMC, the serials were reruns of old Disney films and were cut into segments. The 1977 MMC only had one original serial, The Mystery of Rustler's Cave. Disney also changed theme days to:

Unfortunately, The New Mickey Mouse Club wasn't well-received and had a low-syndication run. After two years, Disney shelved it.

After a ten-year hiatus, Disney returned with The All-New Mickey Mouse Club, which had a format similar to Saturday Night Live. The all-new Mousketeers performed comedies, songs, and live skits. They also sang their renditions of popular songs. The reboot shared the same theme days as the 1950s MMC but altered it throughout the seasons. For instance, for seasons 1-5, Mondays were Music Day, but they moved to Tuesday during Season 6.

The 1980s revival of the show lasted seven seasons. Most famous Mouseketeers alums like Britney Spears and Christina Aguilera are from seasons six and seven. The All-New MMC ended production in April 1996, but Disney ran reruns until May.

After two decades, Disney again revived the show and called it Club Mickey Mouse. Compared to earlier versions of the show, Club Mickey Mouse wasn't televised. Instead, it is aired on Facebook and Instagram. It also has a reality TV show format that follows eight new Mouseketeers' journey to creating new music, friendships, and dance choreographies. They also have a mentor to guide them. Ex-MMC cast member JC Chasez appeared on the show in 2018. Club Mickey Mouse came out in 2017. There are no reports of a season three.

Why Did the Mickey Mouse Club End?

Fun Fact: When the Disney Channel launched in 1983, it aired the original MMC episodes until the 1989 series began.

Some people think that the original Mickey Mouse Club ended because it was no longer popular. However, that doesn't seem to be the case. The show ended in its fourth season after ABC and Disney had a dispute about its renewal. Other factors like lack of sponsors and low merchandise profit also contributed to the untimely cancellation of the variety show.

By September 25, 1959, the original Mickey Mouse Club was no longer on air. Unfortunately, the issues surrounding MMC didn't stop there. ABC prohibited Disney from having the show aired on other major networks. That prompted Walt Disney to file a lawsuit against ABC and won, agreeing that MMC and Zorro couldn't be televised.

As for the third series, The All-New Mickey Mouse Club, which starred young Justin Timberlake and Britney Spears, Disney ended it in 1994 with little explanation. As for the 2017 reboot, Club Mickey Mouse, which airs on Facebook and Instagram, hasn't released an update since 2018.

Who Got Famous From Mickey Mouse Club?

The MMC skyrocketed the careers of its Mouskeeteers, particularly from 1989 The All-New Mickey Mouse Club series. After leaving the show, some cast members became award-winning actors while others became household names in the music industry — you might even be a fan of these Mouseketeers!

Here are 10 Mouseketeers that made it big:

Christina Aguilera was 13 years old when she became a Mouseketeer of The All-New Mickey Mouse Club. From 1993 to 1994, Aguilera, alongside other cast members, sang, danced, and performed sketch comedies. When the show ended, Aguilera pursued a music career. She recorded “Reflection” for the 1998 Disney film Mulan. A year after, she released Grammy-nominated hit “Genie in a Bottle.”

Ever since then, Aguilera's list of accolades keeps expanding. She sold more than 75 million records worldwide and has been a five-time Grammy award winner. Aside from singing, Aguilera also appeared in the 2010 Hollywood film Burlesque.

Britney Spears also had her humble beginnings as a Mouseketeer in The All-New Mickey Mouse Club. She was 12 years old when she joined in 1993 and performed alongside other now-famous MMC alumni Timberlake, Aguilera, Chasez, Gosling, and Russell.

Spears disappeared from the public eye when the show was no longer on air. By the time she was 15, Jive Records, a New York record label company, signed her. A year later, she debuted the hit single “Baby One More Time,” which landed in the top spot on Billboard's Top 100. The Recording Industry Association of America (RIAA) certified Spears' debut album as a 14X certified diamond! To date, Spears released nine studio albums.

Keri Russell joined the third reboot of the MMC when she was just 15 years old. She was a Mouseketeer from seasons four to six (1991-1994). While on the show, Russell appeared in the Disney film Honey, I Blew Up the Kid. If you are a Boy Meets World fan, you might have spotted Russell.

After leaving MMC in 1994, Russell had a few minor roles in TV and films until she landed the lead role in the 1991 TV series Felicity. When it ended in 2002, Russell re-appeared in the spotlight with the 2007 film, Waitress.

From 2013 to 2018, Russell played the Russian spy Elizabeth Jennings in the hit drama series The Americans. She also appeared in Star Wars: Rise of Skywalker, playing the masked mercenary Zorii Bliss.

After watching her ballet balance, Walt Disney personally invited 12-year-old Annette Funicello to join the cast. Although she was the last one to join, Funicello became one of the most popular Mouseketeers, getting thousands of fan letters every month. She stayed on the show from 1955 until they canceled it in 1959.

She later starred in several Disney films and serials, including The Shaggy Dog, Zorro, and Babes in Toyland. When she hit her teens, Funicello transitioned herself as a teen actress, starring in the Beach Party series with Frankie Avalon. When she got married at 22 years old, Funicello officially retired from acting. Funicello died in 2013 due to multiple sclerosis complications.

Like Funicello, Crawford was also a 1955 MMC alum. He was just nine years old when he joined. Unfortunately, he was axed after the first season as Disney cut the cast members from 24 to 12.

It didn't stop Crawford's career, though. He became an illustrious child star, appearing in Little Boy Lost and The Lone Ranger. He also starred, alongside his fellow ex-MMC cast member John Grady, in The Rifleman, wherein he received an Emmy nomination at just 13 years old!

Aside from acting, Crawford also had a great music career. He had three albums and produced songs like “Cindy's Birthday” and “Rumors,” which landed in Billboard Top 100 hits.

Crawford died in 2021 due to Alzheimer's disease and contracting COVID-19 and pneumonia. He was 75 years old.

Timberlake was also a former cast member of The All-New Mickey Mouse Club when he was just 12 years old, spanning from 1993 to 1994. A year after, he and fellow Mouseketeer JC Chasez teamed up with three other singers to form the boy group *NSYNC.

During the early and late 90s, the pop boy group sensation released many hits, including Bye Bye, Tearing Up My Heart, and It's Gonna Be Me. Unfortunately, the boyband disbanded in 2002, and Timberlake pursued a solo career.

Timberlake's talents and charisma proved to be a hit as he won several awards from the Grammys, MTV Video Music Awards, and Brit Awards. He recently received the Songwriters Hall of Fame's Contemporary Icon Award. In addition to singing and producing hits, Timberlake also starred in films like The Social Network and Friends With Benefits.

In 1998, Gosling starred in the TV series Young Hercules. He also appeared in The Believer and Murder by Numbers, but the 2004 film The Notebook solidified Gosling's acting career. Now 41 years old, Gosling starred in many critically-acclaimed Hollywood movies like La La Land.

NSYNC member JC Chasez also started his career in MMC. He was a Mouseketeer from 1991 to 1994. Chasez later joined Timberlake to form the boy group NSYNC. In 2018, he returned to Club Mickey Mouse, not as a Mouseketeer but as a mentor.

Tiffini Hale also joined MMC when Disney rebooted it in 1989. She, later on, became a member of the pop group The Party, alongside Mousekeeters Damon Pampolina. Deedee Magno, Jeune Pierre, and Chase Hampton. Unfortunately, Hale suffered a cardiac arrest that put her in a coma. She died Christmas morning in 2021.

There you have it. MMC is simply a variety TV show created to finance Disneyland. It may no longer be on air either on TV or social media, but it catapulted many careers of some of the most famous musicians and actors we know today!

Bobby Kania is a full-time blogger with multiple blogs spanning topics in education, music, and advice. He currently lives in Seattle with his wife and cat. Learn more at Capitalize My Title.

The ‘Thor: Love and Thunder’ Trailer Isn’t as Good as ‘Thor: Ragnarok’