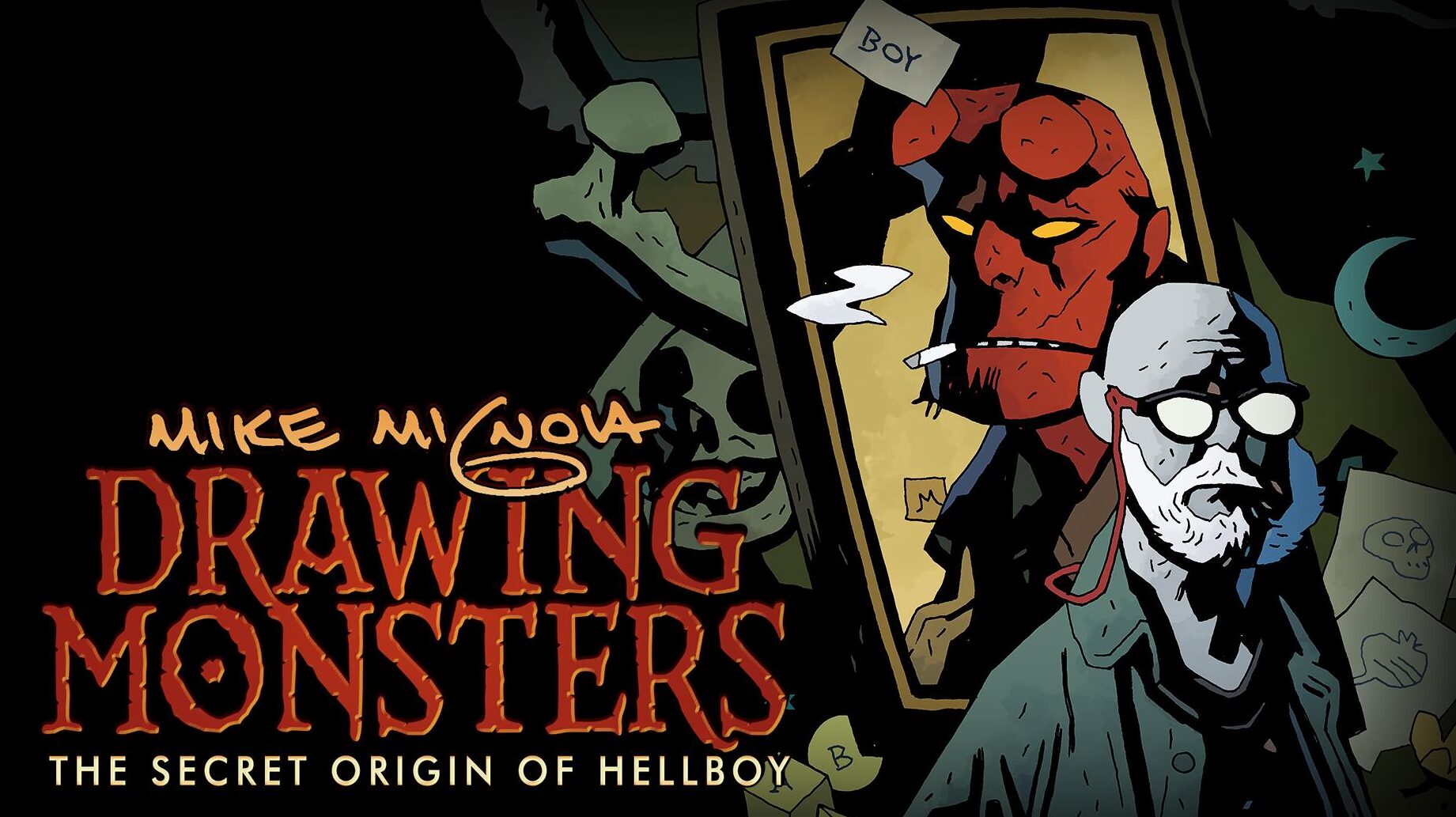 Like most biodocs and their narrative siblings biopics, Mike Mignola: Drawing Monsters is a celebratory affair, but it avoids pure hagiography.

The film focuses on the life and work of comic artist and writer Mike Mignola. It includes interviews with Mignola, his wife Christine, his brothers Todd and Scott, and more professional collaborators and colleagues.

Endearingly, it sometimes seems that Mignola's involvement kept the film from becoming overly grandiose in its praise of his work and impact.

For example, late in the documentary, when the focus turns to the unofficially but widely titled “Mignolaverse” series that exist within the world of Hellboy, Mignola says he doesn't like the name and uncomfortably wiggles in his chair and gives a weak “ugh” at the mention of it.

This same self-consciousness and humility play a significant role in making the documentary compelling.

The film's first part features interviews with Mignola and his family members discussing his upbringing, relationship with his father, and his first forays into the comics industry. Next, we learn from Mignola and his brothers that early on, he was interested in ghost stories and mythology.

They also share an anecdote about going to Berkeley from their home in Oakland on weekends and visiting five different used bookstores to scour their shelves for exciting reads.

In the film's early moments, Mignola offers an authentic look into his headspace as a young artist attempting to break into the industry as an inker. He says of his first job as an inker (someone who adds depth and shading to an existing penciled drawing) that he made the art worse.

He doesn't make excuses or attempt to rationalize that the editors didn't understand what he was doing; he states simply that he made it worse. He fully acknowledges that his initial move to New York, the comics capital of the world in the 1980s, was somewhat disastrous.

This honesty from Mignola and others makes the documentary a much richer watch than a simple timeline of his career. We hear from Mignola that he likely would not have succeeded as he has were it not for the support of his wife.

Mignola and his brothers talk about how their dad was tough and how he couldn't tell his children he was proud of them but that he was a good father and that Hellboy is partly based on him.

But it's not only Mignola's family that lends the film a real emotional heart.

Actor Ron Perlman wells up as he talks about the emotional impact Charles Laughton's performance in the 1939 adaptation of The Hunchback of Notre Dame had on him as a child. He also shares he hoped he could do the same for young viewers of the Hellboy movie who felt like outsiders and misfits.

Younger creatives Rebecca Sugar, creator of Steven Universe, and Jorge R. Gutierrez, creator of Maya and the Three, share how Mignola's art and supportive mentorship have given them the courage to make the art they want to make.

Apart from these moments of tenderness and emotion, this honesty lends the film more credence in its consideration of history with Mignola's collaborators. Many collaborators speak about Mignola's temper; they say he can be stubborn and often wants things done his way.

Guillermo Del Toro and Mignola discuss their difficulty working together on the Hellboy films Del Toro directed. Mignola says that while there are things he loves about the movies, there are also some things he can't stand.

The film creates visual interest by including frequent panels from Mignola's work, old photographs and videos of Mignola and his family, and artists who inspired him. At one point, when Mignola talks about first moving to New York, panels from one of his comics are shown as he tells the story because they pair perfectly.

It's also more visually interesting to see the interviewees in their offices and homes than the blank backgrounds often used for talking heads in documentaries. In addition, interviewing people in their personal environments likely fostered more candid conversations.

The documentary's most impressive aspect is how dense it is for its hour and forty-minute runtime. It tells the stories of Mignola's childhood and career and devotes time to the movie adaptations, highlights artists he has inspired, and still finds time to share fun anecdotes.

It could be said that the story about how he and his wife met wasn't integral to a movie about his impact on comics. However, it makes the film more personal and allows the audience to connect with these titans of the comics and film industries as real people.

Mike Mignola: Drawing Monsters is a beautiful documentary that is incredibly informative and surprisingly emotionally potent. Fans of Mignola's should certainly seek it out.

Lovers of art and documentaries who aren't familiar with Mignola or Hellboy also should seek out this film as it's one of the most moving documentaries to be released on creativity in years.

Mike Mignola: Drawing Monsters is playing in select limited release theaters. Follow us here for the latest on movies in theaters now.

Sorry Joe Dante, We Think Baby Yoda is His Own Puppet

Cute and Comfy Outdoor Picks for Any Budget