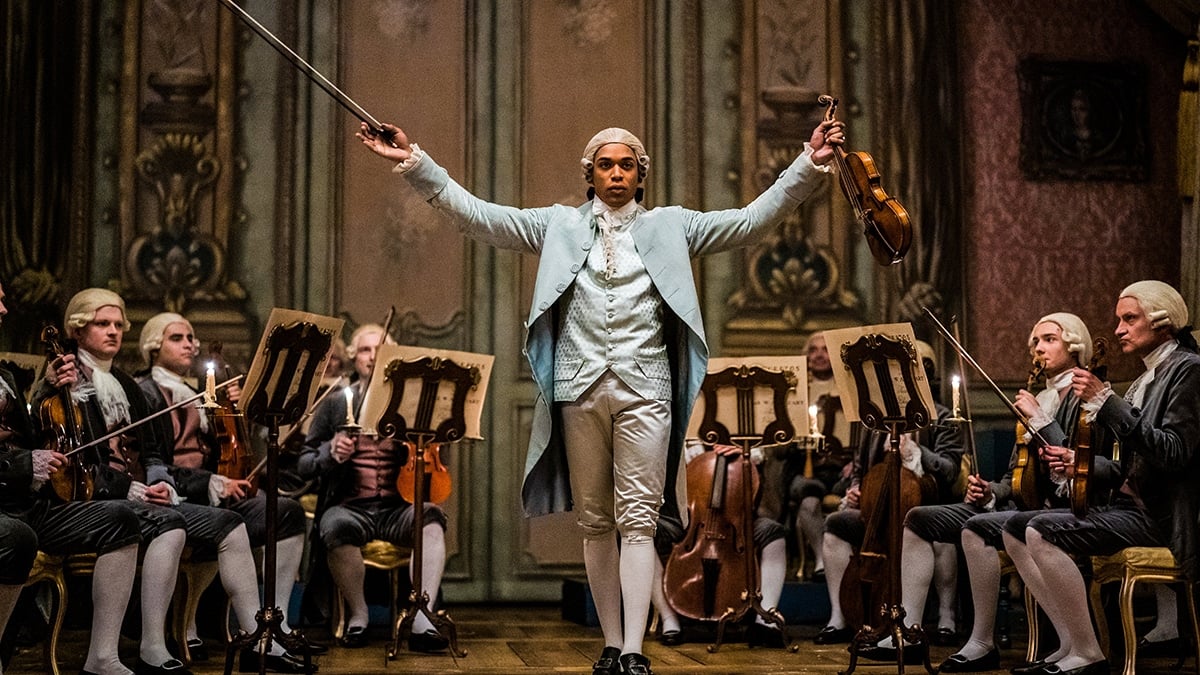 The TIFF film Chevalier is a dizzying achievement, frequently on the verge of collapsing from its multifaceted ambitions and the complexity of the staggering achievements of its real-life subject, the 18th-century French composer Joseph Bologne (played an absolutely electric Kelvin Harrison Jr). The fact that it doesn’t is mostly due to writer Stefani Robinson’s keen awareness of where to hold back and allow the unspoken to dominate in silence, while director Stephen Williams captures the opulent surroundings and the personal dramas to an equal, astounding degree.

There’s also Harrison himself, who has been quietly building up an impressive, mostly indie filmography in films such as Luce and Waves. He plays Joseph with a relish that allows for skill, swagger, and eventually, the most painful vulnerability once he realizes even his country will refuse to fully embrace him, regardless of his very considerable skills.

Anyone watching will feel every bit of this injustice, no less as we are introduced to the sheer scope of Joseph’s talent first and foremost when he takes the literal stage to challenge Mozart himself, not only beating but blowing right past him, taking both audience and orchestra along for the exhilarating classical duel.

It’s by no means the last time he’ll prove himself. Joseph is a born performer: charismatic, confident, and perfectly, carefully calibrated to appeal to the French royal court, counting Marie Antoinette (Lucy Boynton) as an intimate acquaintance and champion. Flashbacks reveal him to be the illegitimate son of an enslaved woman and a French nobleman, the latter of whom left him an especially complex legacy to grapple with.

His father George Bologne (Jim High) championed Joseph despite racist objections, ensuring his skills had the chance to be honed to perfection, and encouraging him to see himself as equal to any man. He also encouraged him to believe he would only be loved for his talents, and forcibly separated Joseph from his mother Nanon (Ronke Adekoluejo), who wouldn’t see her son until after George’s death.

Her return is the catalyst for Joseph’s painful recognition that his Blackness will in some ways remain an insurmountable barrier, in ways both political and personal.

It’s the personal that threatens to break him, with his affair with the married opera singer Marie-Josephine acting as a kind of guidebook of the various ways even wealthy white noblewomen were trapped under a system that also viewed them as chattel to be bred to the most eligible men. Such generosity toward her character is certainly astounding, but it is somewhat undercut by the fact that she has no Black female counterpart given as much attention who isn’t the mother of the man under the microscope.

That said, it’s hard to tear our eyes away from Joseph, no less as his innumerable achievements were deliberately erased from history thanks to Napoleon, who also apparently reinstated slavery. Shocking to be sure, but Chevalier is clearly determined that Joseph’s art is what will leave the strongest impression, and it very much succeeds on this front, with the various classical and operatic performances possessing all the magic of a musical tour de force that leaves you breathless.

Musical biopics don’t get much more epic, and under it all is a lingering question for us. Is our carefully constructed society about to be swept away as well, and for what? The answer may lie in how much we are willing to embrace those who have been traditionally sidelined to the margins of history.

After debuting at the Toronto Film Festival, Chevalier is expected to arrive in theaters in late 2022 or early 2023.

Meanwhile, we've got the updates on all the films currently in theaters.

Life for Women Is a Royal Pain in the Dreary ‘Corsage’