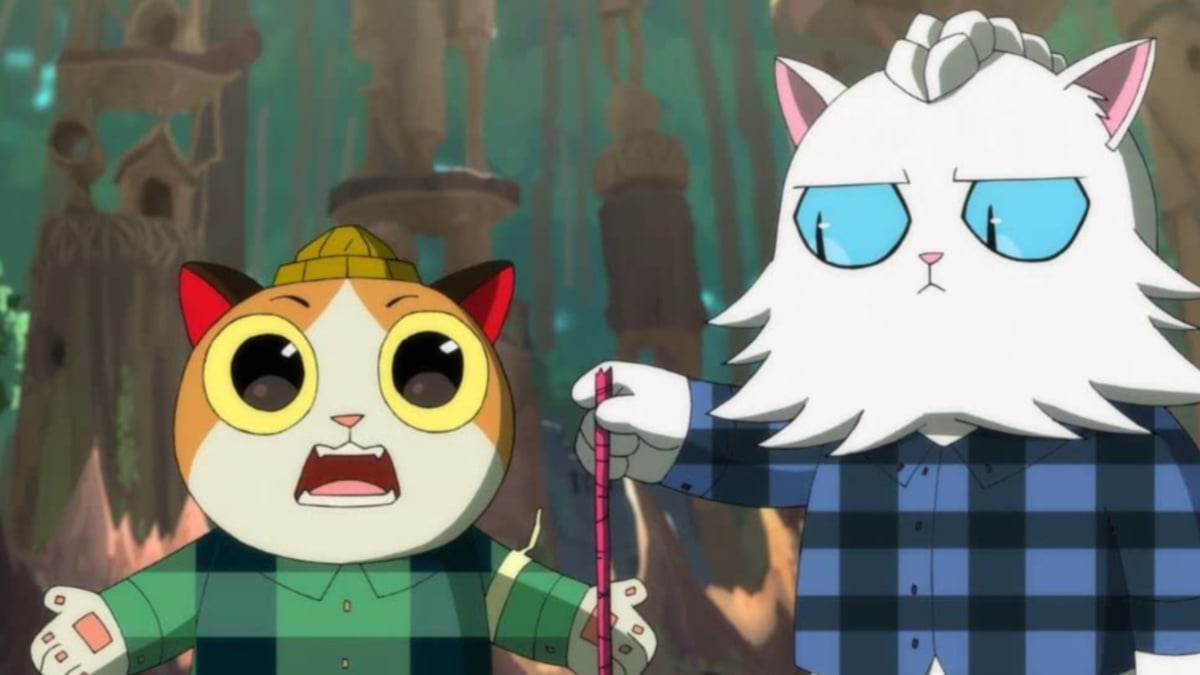 The Best Animated Shows on Netflix for the Whole Family

It’s family media night again. Let’s find a TV show that everyone in your family will enjoy. Here are ten animated series created to entertain everyone from the goofy kids to the quiet teens to the tired adults in the household. These shows all share two things in common: They’re all streaming on Netflix, and they’re all excellent.

This show is fantastical, witty, and just plain weird. At the same time, it tackles genuine problems that everyone has to face at one point or another: puberty, change, and growing up.

No matter how hard Reggie and her friends try to cling to their childhood, their nemesis on Endless—the Butt Witch (Matt Berry)—throws obstacles their way that they could never see coming.

Carmen Sandiego video games, TV shows, and music were all the rave in the ’90s. This unstoppable super-sleuth is back at it again in the Netflix show Carmen Sandiego, and this time, we’re on her side.

A young Carmen Sandiego (Gina Rodriguez) escapes from the headquarters of the Villains' International League of Evil (VILE), where she grew up. She dedicates her elite thievery skills to stop VILE’s evil plots with the help of her faithful team: a White Hat Hacker named Player (Finn Wolfhart) and two bumbling yet helpful Bostonians (Michael Hawley and Abby Trott).

The show is an action-packed spy thriller that combines educational programming with high-stakes scenarios to keep kids engaged. On top of that, the show features many complex players with different goals that make the story textured and compelling.

• mighty women who can’t be defeated

• learning about geography and world culture

The infamous Avatar: The Last Airbender (ATLA) deserves a prominent spot on this list. This 2000s Nickelodeon show significantly impacted this generation of kids and changed the face of children’s animation.

Young members of the Southern Water Tribe Sokka (Jack De Sena) and Katara (Mae Whitman) stumble upon Aang (Zach Tyler Elsen), a young boy stuck in an iceberg. It turns out he was there for one hundred years, and he’s the lost Avatar: the only hope of ending the dominion of the Fire Nation over the rest of the world.

Atop their flying bison named Appa (Dee Bradley Baker), the trio travels the world, preparing for the ultimate battle. On their expedition, they meet new companions like the Earth bender Toph (Michaela Jill Murphy) along with rivals Prince Zuko (Dante Basco), the exiled son of the Fire Lord, and his ruthless sister Azula (Grey DeLisle).

The show is so popular that its inspired dozens of books, a live-action movie, and a live-action TV show that Netflix plans to release sometime in 2022.

• the history of influential animated TV.

ATLA was so well-received and remained so popular over the years following the show’s ending in 2008 that Nickelodeon released The Legend of Korra four years later.

The sequel follows the Avatar after Aang—Korra (Janet Varney)—a teen training to protect harmony in the New Republic. But we soon learn that the world is not as peaceful as it seems, and Korra still has a lot of work to do to end the war.

The series battles challenging themes. It faces the pressure of saving the world, overcoming trauma, and building healthy relationships. Parents and kids alike can relate to the messages tucked within the thrilling, magical story.

• learning more about the ATLA universe

If you’ve ever worked a crappy summer job or been to an amusement park in America, this show will feel all-too-familiar.

Neighbors and classmates Barney (Zack Barack) and Norma (Kody Kavitha) get the same summer job for very different reasons. They work at Paranormal Park, a more realistic name for the attraction that the two expected.

The unique animation style immediately draws the viewer in, along with the witty jokes and suspenseful situations. What is going on at Paranormal Park? Join Norma, Barney, and a talking pug named Pugsley (Alex Brightman) on their journey to find out.

• something spooky, silly, and utterly relatable

This animated children’s fantasy series is utterly charming, and not just because most of the characters have British accents. The show begins with our titular character Hilda (Bella Ramsey), prancing through the forest by her isolated woodland home with her deerfox Twig. She soon learns that her mum (Daisy Haggard) wants to move the family to Trollburg, a nearby city so that Hilda can make friends with other (human) kids her age.

Hilda takes her adventurous spirit and creativity to Trollburg, where she learns how to make new friends. Instead of exploring the wilderness of her old home with giants and elves and wolfs surrounding her, she now journeys through the streets of Trollburg searching for adventure.

Hilda is an excellent story that encourages kids and adults alike to be curious, adventurous, and take risks. Great characters, fascinating creatures, and essential themes throughout the series leave a lasting impact on viewers of all ages.

• the idea that not everything is what it seems

• the journeys of a courageous adventurer

• encouraging young girls to be confident and think outside the box 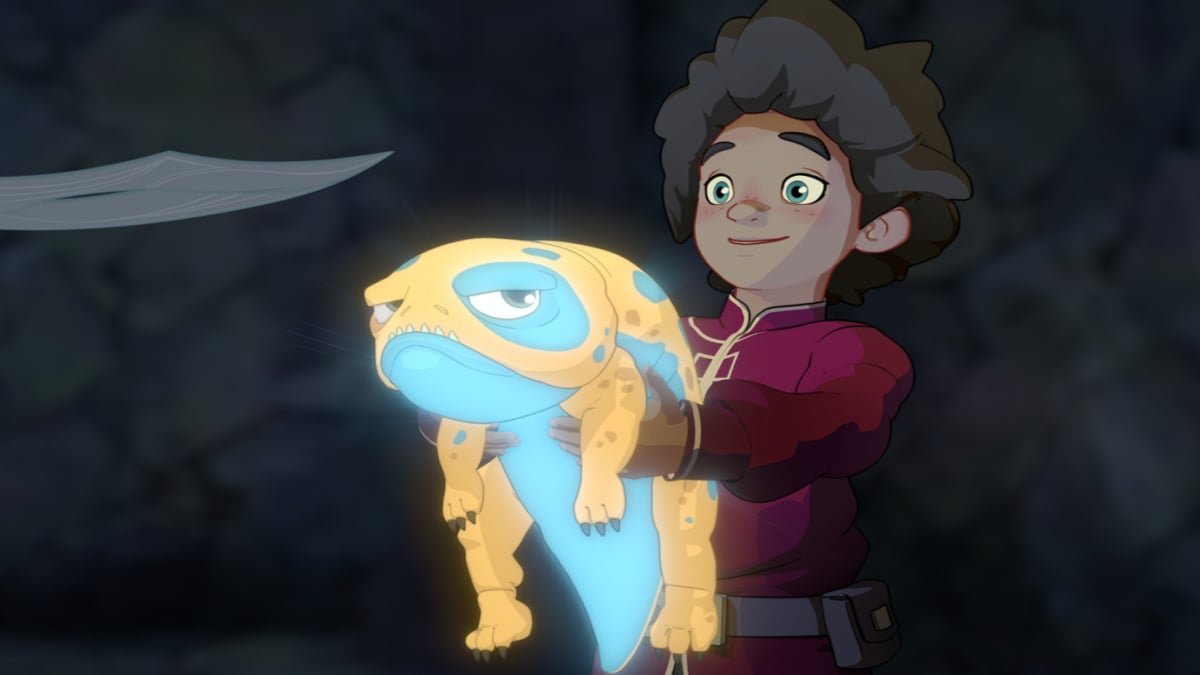 If you wish your kids could watch Game of Thrones, only you wish it wasn’t so violent and filled with adult themes, here’s a compromise. The Dragon Prince is a Netflix original series about two young princes, Callum (Jack De Sena) and Ezran (Sasha Rojen), who join forces with a Moonshadow elf named Rayla (Paula Burrows) to end an ongoing war between the humans and the magical creatures.

To save their kingdoms and ultimately the whole land of Xadia, the trio must reveal the truth of the Dragon Prince’s egg to the entire world. But will that be enough to end the war?

• the quest to end the war once and for all

This Canadian teen mystery animation starts with a jolt. Three teenagers wake up in a room with no memory of their past. They can’t remember if they’ve met each other before, why they have specific valuable skills, or even their names. But they all know one thing: they all desperately want to go home, wherever that is.

As the story progresses, the suspense heightens. The exceptionally well-written relationships between the three strangers intensify as we discover more strange elements of the world the three find themselves stuck within.

There’s no way to know who is a villain and who is an ally. All the teens can do is try their best to survive and escape with what little they know.

Nate Stevenson’s storyboarding debut is not only an incredibly well-developed program but also revolutionary because of its LGBTQIA+ representation and the way it challenges the traditional trajectory of the Hero’s journey.

When Hoard Cadet Adora (Aimee Carrero) discovers that the people who raised her were trying to colonize the entire planet, she finds a sword that gives her the power to turn into She-Ra, a powerful warrior princess. According to legend, She-Ra’s return to Etheria means she will finally bring peace to the planet.

Adora’s journey is challenging. The pressure of saving the world is on her shoulders, and her ex-best friend Catra (AJ Michalka) continues to torment her at every turn. The dynamic and complex relationship between Catra and Adora, the creativity of the magic on Etheria, and the progressive themes are what make this show a must-see for all audiences.

• powerful princesses joining together to fight against evil

• the deconstruction of the Hero’s journey

Picture the world 200 years from now. What can you imagine? For the creator of Kipo and the Age of Wonderbeasts—Radford Sechrist—it looks like this: Humans are forced underground into burrows where they must hide from the mutant animals (‘mutes') that can talk or grow as tall as skyscrapers who rule the surface.

But everything changes when a twelve-year-old girl named Kipo (Karen Fukuhara) finds herself lost on the surface with no idea how to find her burrow again. Kipo, the viewers soon learn, is no ordinary kid. She is unabashedly optimistic and chooses to see the good in everyone she meets. As she learns more about herself and her family’s secrets, she discovers that she may be the only one who can end the human-mute conflict.

The group encounters enemies on their journey, like the frog in a suit named Jamack (Jake Green), the melodramatic and unhinged mandrill Scarlemagne (Dan Stevens), and the heartless Doctor Emilia (Amy Landecker). Can Kipo and her crew save the world with friendship and forgiveness?

• awesome mutant animals that roam the surface of Earth

5 Tips for Saving on Groceries and Staying on Budget

How To Turn Your Unused Garage Space Into Extra Income