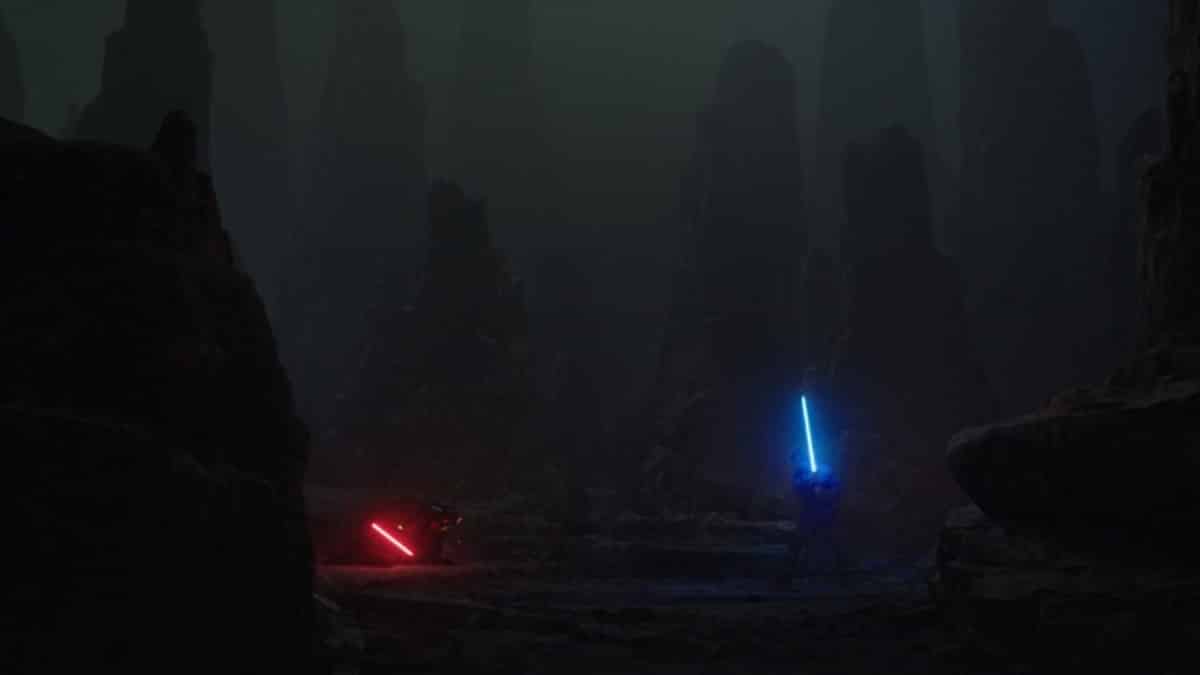 Obi-Wan Kenobi Part V saw Darth Vader (Hayden Christensen/James Earl Jones) outplayed yet again by his teacher Obi-Wan (Ewan McGregor) in a series of moves that mirrored a flashback to their days of lightsaber sparring. However, Kenobi’s machinations only buy him and the refugees a small window of time. While their transport gets off Jabiim, it isn’t long before Vader and the Grand Inquisitor (Rupert Friend) are in pursuit.

Meanwhile, they abandon Reva (Moses Ingram) on Jabiim with a deep stomach wound and the knowledge that a Force-sensitive boy of some importance is on Tatooine.

Despite having tremendous firepower and being reasonably close, the Empire can’t seem to hit much of the refugees’ escape transport. Roken (O’Shea Jackson Jr.) is on hand to stress that, actually, yes, it really is a precarious situation, but there’s a disconnect between his words and the action on the screen. Perhaps the show is just as much in a rush to get to the main events as we are, so it couldn’t be bothered to feign concern about this portion of the story.

That said, this part of the ship does give us a nice moment in the evolution of Haja Estree (Kumail Nanjiani). While the moment doesn’t feel 100% earned, the idea that this con artist has been transformed almost entirely by encountering the real deal is good. Plus, the scripting never makes Nanjiani or McGregor make a big speech about the change. That leaves Estree’s joke about being a liar the only acknowledgment of the evolution. It may be a bit unearned, but “Obi-Wan” Part VI (and last week as well) plays it at just the right pitch to make it totally palatable.

Reva Can’t Do It

Speaking of unearned moments… Or maybe I’m just a little sore from how hard I misread the busted communicator scene from last episode. Probably a mix of both.

If you missed that, I thought the broken communicator broadcasting Bail Organa’s (Jimmy Smits) message again was supposed to indicate that Vader had heard it. That wasn’t it at all. What it was actually supposed to show viewers was Reva learning of young Luke (Grant Feely).

What feels unearned to me is both how she goes from there being a Force-sensitive child on Tatooine to obviously that child is Vader’s son. Maybe she learned something from her time with Leia that helped her make that connection? But, even if that’s the case, “Obi-Wan Kenobi” Part VI doesn’t show its work.

The second unearned bit is this doesn’t feel like how Second Sister would’ve redirected her hunger for vengeance. Unless she assumed that Vader himself put Luke on Tatooine, there’s no reason to think the Sith apprentice would ever hear about Luke’s death, never mind put together what it meant.

Because of those aspects, I never really bought that Reva was serious in her desire to do harm. Obviously, continuity meant she was going to fail, but even without that in place, I never bought her as being ready to kill a child. Again, Ingram plays all the beats well. I just didn’t think the plot mechanics supported where the script was trying to push her.

Cool to see Luke’s aunt and uncle mixing it up, though. It demonstrates why they were the two selected to protect the other Skywalker offspring for the first time. The Organas had the power and the insulation to raise Leia. Aunt Beru (Bonnie Piesse) and Uncle Owen (Joel Edgerton) Lars had the isolation and the self-preservation skills to hide Luke and defend him should it come to that.

Of course, what viewers were really all here for was Obi-Wan v. Vader, Bout 2. It isn’t an easy tightrope to walk. It has to be engaging in and of itself but also not upset the apple cart in terms of continuity. Of particular concern to many was Vader’s “When I left you, I was but the learner, but now I am the master.” How can that be true, especially after their fight in Part III?

This fight shows how frightening peak Vader is, how much stronger Obi-Wan has grown since re-embracing his Jedi-ness, and justifies that line for A New Hope. For all the baggage the fight has on its shoulders, it ends up a surprisingly satisfying.

For one thing, the setting is appealing old school. I’m not sure if it actually was, but the hazy background with its multiple moons looks very much like a matte painting that the original trilogy used to great effect. The landscape feels tactile if a bit cheap, in a way that, again, feels like a throwback to the original trilogy pre-upgrades. By the time Obi-Wan is tossing a fleet of boulders, rocks, and pebbles at Vader, the environment feels real enough the CGI doesn’t detract from the sense of real stakes and pain.

Obi-Wan resisting the urge to end Vader is a smart choice as well. I mused last week about how Kenobi using Reva as a weapon against Darth Vader felt like an intelligent strategy but not an especially Jedi choice on his part. His decision to walk away does, more or less, seal his fate a decade down the road. Still, it also saves his proverbial soul. If he had killed Vader, he never could’ve helped guide Luke. Without that, there’s no saying how grim the galaxy’s future ends up.

Obi-Wan Kenobi Part VI successfully ensures this series is the most complete season of live-action Star Wars television that Disney+ has delivered yet. The six episodes felt well-plotted, and there was little fat on the bone. Fans hoping for more of a character study of Kenobi will probably be a bit disappointed. However, after Book of Boba Fett’s somewhat meandering pacing and The Mandalorian being clearly conceived and told as a more long-term project, this show’s more specific focus is a welcome change.

Despite some very loud opinions to the contrary, the performances all were strong, with McGregor himself being an obvious standout. I appreciated how often the scripting went for the subtle gesture, the observed moment, over the big event or speech. Obi-Wan Kenobi seemed to trust the story it was telling and the audience’s ability to keep up.

Lastly, shout out to the blunt explanation for Vader giving up his Kenobi hunt. The Emperor told him not to. It’s not elegant, but I respect that brute force solution.

Hopefully nothing. I know McGregor is already on the record about being up for another season. It is admittedly hard to turn that down as a fan—or as an entertainment company, I’m sure. However, the more Obi-Wan adventures you tell, the knottier the continuity becomes. That’s not a huge deal for me, but I know it is for many people.

Kenobi’s closing good-bye to Leia, introduction to Luke, and encounter with the Force ghost of his master all feel like the show stepping just right. It’d be a shame to go back and kick up all that dust after Obi-Wan Kenobi finds such an elegant way to send the character off.

There are lots of great Obi-Wan further adventures in animated form. Between those and this series, maybe the franchise can let the old man rest and find some new characters to showcase.

Money Doesn’t Grow on Trees, but These Easy Side Jobs Can Help You Earn Some Extra Cash