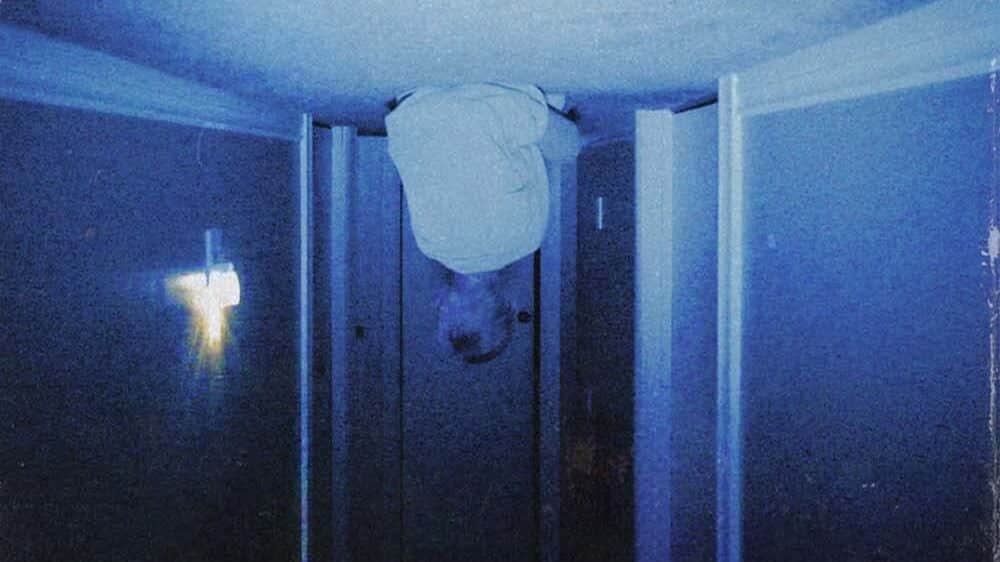 The Blair Witch is coming from inside the house!

But I digress. As far as blank canvases go, Skinamarink provides a broad brush for audiences to paint their fears upon with many a flourish. The 1995 setting is an especially shrewd choice, with the usual benefit of removing digital devices from the equation amplifying the nighttime terrors of childhood that also contain whispers of a world still emerging from a post-COVID nightmare all its own.

The low res hijinks begin when two young children find themselves alone in their home with their parents missing and all the doors and windows mysteriously vanished. As four-year-old Kevin (Lucas Paul) and six-year-old Kaylee (Dali Rose Tetreault) settle into the living room together, they do what any 90’s kid would do to distract themselves: pop in a video and park in front of the TV. But as the unsettling old-timey cartoons right out of the public domain play, it becomes apparent that something is in the house with them.

As the two hope for some form of rescue from a home that has become a prison, it’ll admittedly be difficult for the most hardened of viewers not to become unsettled at some point. We all still remember what it was to wait with bated breath for society to come back to life, and Skinamarink is designed to awaken more than a primal fear of what’s lurking in the dark; it’s enough to bring the worst of quarantine-induced paranoia right through the screen like the girl of The Ring.

The low-budget aesthetic is also quite real, with Skinamarink filmed in director Kyle Edward Ball’s childhood home on a budget of $15,000 and social media word-of-mouth. The result may owe quite a debt to Paranormal Activity, but the grainy footage feels more at home in the indie guerilla filmmaking of 70’s horror.

Those grindhouse-era filmmakers may very well laugh at the idea of being lumped in with Skinamarink though, where fear alone proves to be something of a diet of starvation. As the camera takes its time gazing at various features of an ordinary home that becomes extraordinary thanks to the dark forces invading it, patience becomes a vice rather than a virtue, especially when spilling young blood is clearly a terror in itself for Ball.

But you can only watch the strobing light of a television set so many times before it becomes tiresome. Objects moving by themselves get old when the camera refuses to move with them. Even the scariest bedroom sequences end abruptly with jump scares that are cheap for more reasons than budgetary restrictions.

The movie’s points are also hammered home time and again, with vanishing cartoon rabbits playing on an analog loop before an actual stuffed toy rabbit leaves the frame. Even LEGOs become less fun, as the camera repeatedly zooms in on them while they twitch and retreat from our set point of reference by an unknown force, who clearly views the cozy home it’s invaded as little more than something to be similarly put together and taken apart at will.

It also becomes very clear how this will play out for the kids involved. The odds begin against them in many ways, but the fact that their faces make very intermittent appearances doesn’t bode well for their chances of outlasting the runtime. Their voices are so seldom heard and reveal so little that their presence could hardly be called acting, and the fact that they don’t come fully alive speaks to an extremely modern form of cowardice, which loudly demands we think of the children while cutting off much of the context and screen presence which could get us fully invested in their fate as people, rather than mere reflections of our worst anxieties.

For viewers who happen to be parents, Skinamarink will speak to the terrors that should’ve been left behind for innovations such as vaccines and the Internet, creations of our own making that were meant to connect and protect rather than mutate into divisive screaming points. Granted, a child alone in a home being raised by mysterious, hateful voices emanating from a screen is a nightmare few would’ve taken as seriously before 2020. It’s all too real now, but where does that leave the rest of us? At a certain point, uniqueness bolstered by mere vanishing everyday objects just doesn’t cut it.

Passing on Bread To Stay on a Roll? Reignite Your Motivation To Keep Resolutions With Destinations