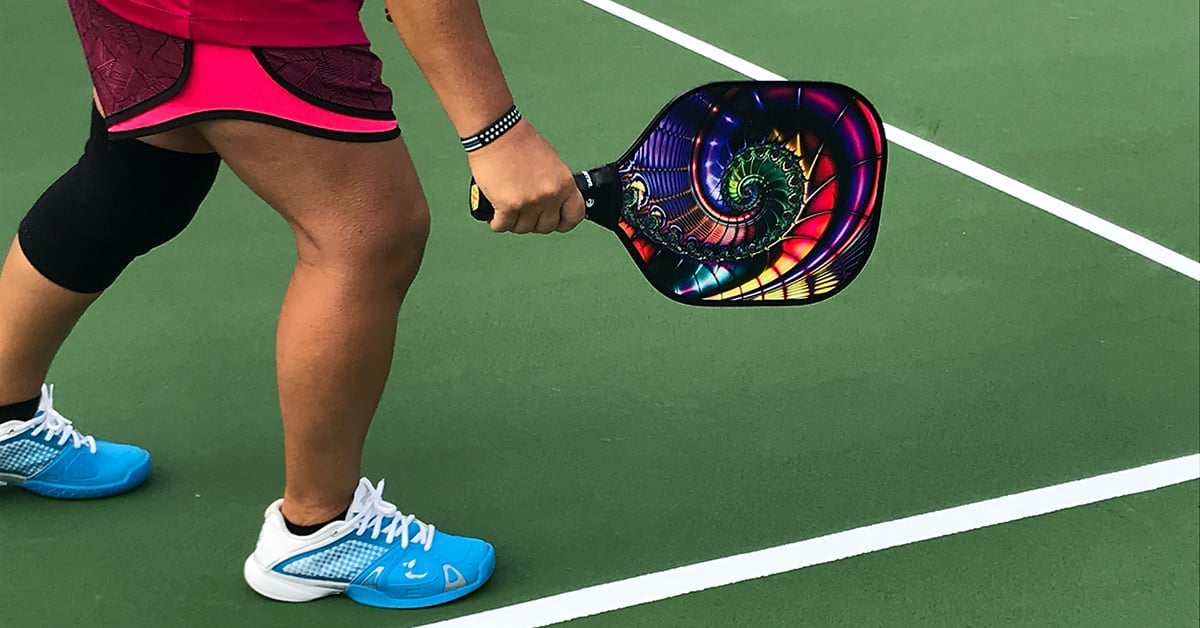 Pickleball—it’s the latest on-trend sport you keep hearing about. Developed in 1978 but recently surging in popularity—it’s one signature away from becoming the official state sport of Washington State. So I tried it—despite being out of shape, a little overweight, and never having watched or played the game—and this is what happened.

The first step was a quick google search to find a playing location. Thankfully I found one which accepted all levels and stated they had “kind and patient” coaches. This is definitely what I needed.

Next, I pulled out my workout gear and my brand-new tennis shoes, which still had tags.

There is nothing like breaking in new shoes, working out, and playing a new sport for the first time all at once!

A little nervous and not knowing what to expect, I arrived to find two dozen players already on the courts, warming up and greeting each other. I felt like I stuck out like a sore thumb.

However, any anxiety or nervousness went away when I met my future pickleball coach, Alice. She could see I was new, got me signed in, took my $3 fee, and lent me a paddle. She then told me I was wearing the perfect outfit and shoes. That was already a win—at least I dressed the part!

The courts are divided by skill and speed level, so I ended up on the slow/beginners court. She stayed with me and taught me about the “kitchen” (the area closest to the net on both sides) with its main rule that you are to stay out of it.

Learning why it’s called the kitchen would have to wait for another day. For the record, though, there are no pickles involved.

After a few lessons in serving and practice on the beginner court, it was time for a scored game with other players. Nothing like being thrown right into the fire! Was I ready for this? It didn’t take long to realize I might not be. I would watch the plastic Wiffle ball whizz past my outstretched racket without contact.

The result? Alice took me to the side practice court—just the two of us—to work on my hand-eye coordination and follow-through, both of which are key elements of play. We bounced balls on and off each other and the wall, even with a smaller court.

I eventually would return to the main court and play another game or two—with Alice and other players encouraging me along the way and hoping I would return another day.

I returned for a second playing session with Alice and many of the same players again. Had I improved? Ever so slightly, I believe I did. However, the experience was a bit different. It seemed expected that I remembered all of the rules.

My second attempt revealed new rules, and the rules seemed to keep changing – the side-outs are confusing to me. I still didn’t know how to keep score, and often no one could remember the score correctly anyway.

Alice and I had some impatient moments with each other, yet she still praised my progress and said I would do well. I was able to make some returns and volleys and heard praise coming from players watching behind me.

Since play stops on your court when a stray ball from the next court wanders over (for safety), I was the unlucky victim of several point do-overs right after making a great point or two!

Nevertheless, I used my sense of humor to persevere through those moments of adversity. It’s supposed to be fun, after all. A sign on the wall that said “PB- It’s Only a Game” was an excellent reminder.

Here are some tips I learned about playing pickleball:

My observations and lessons learned after two pickleball sessions:

Find patient and compassionate players with similar levels of skill or competitiveness to play with. As a newbie, find players who might be willing to forgo a full-scored game for some good old-fashioned volleying.

I often hit it too hard or not hard enough, but at least I improved from session one to make contact with the ball, even if the result wasn’t where I wanted or intended. I still don’t fully understand the rules or how to say the score (the serving position changes and is noted in the score. So I often got this mixed up.

I followed the directions of others on where to go on the court during serves and in general play. The other players help guide you. There are rules about how the ball can bounce before being played. However, it can be confusing to keep track of.

I didn’t get injured, nor did the ball hit me in the face. Breaking in my shoes turned okay, too, and they had the proper grip for the surface.

“Nice shot.” “I’m sorry.” “Oops.” “Out.” “Ball!” These are all words and phrases you say or hear on the pickleball court—especially when you are a beginner.

Be prepared to sweat, and feel muscles you’ve never felt before. I could barely move the next day! So after the second, I made sure to grab my Epsom salts and soak those newly found muscles.

Will I play pickleball again, you ask? Yes, I plan to return in my quest to learn more about this combination of tennis and ping pong, which is rapidly becoming the norm in gyms across America. Just don’t look for me in tournaments anytime soon. ‘The Art of the Batman’ Showcases the Creative Process, Comic Book Influence, and Vfx & vr Tech