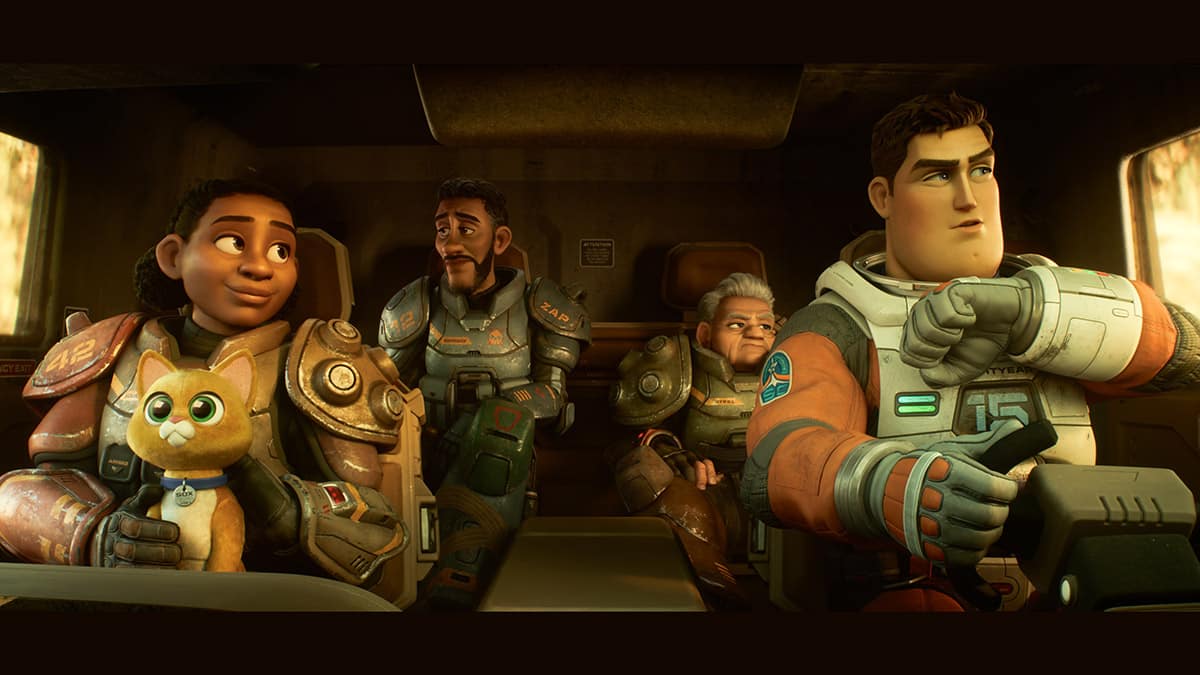 During the press conference with the cast and filmmakers, they discuss finding their characters, the importance of the same-sex kiss, if Lightyear is live-action or animated in the Toy Story universe, and so much more.

What Taika Waititi Learned About Filmmaking Working With Pixar

Taika Waititi lends his voice to the character of Mo in Lightyear, but he is no stranger to filmmaking. The creative Kiwi has directed films and TV episodes, including an episode of The Mandalorian and Our Flag Means Death. Thor: Love and Thunder is his next project to hit theaters. When asked if he learned anything that he will take with him on his own filmmaking journey while working with Pixar, he says he certainly did.

“Especially with Pixar, it's the relentless pursuit of a perfect story. You can see that time and time again with their movies. I always go back to their movies, not only just for entertainment or to feel something emotional, but I go back to study how they structure their films and the economy of storytelling, and the way that they write their scripts.

“Annoyingly, they get it right every time, so I'm not afraid to rip off those practices that they use. It's inspiring to see as a filmmaker – to see these guys make these perfect films all the time.”

Izzy Hawthorne is a strong, powerful woman in Lightyear. She has a lot of great qualities and when Keke Palmer, who voices her, was asked what she admires most about her, she didn’t even have to think.

“Her love for her grandmother, Alicia, and the legacy that she wants to uphold. She wants to make her family proud. And that's something that I think we all can relate to. And the fact that she's not afraid to pivot, I really admire that about her. I feel like she displays so many great leadership qualities that sometimes we overshadow. She knows how to push her friends forward. She knows how to see something in somebody so they can carry out their duty, she empowers others.”

Dale Soules' character Darby isn’t given much of a backstory at all. Fans will learn a little bit, but she is mostly inscrutable. So when asked more about her, Dale Soules says that she wanted to keep her mysterious.

“We do know that she was incarcerated. Everyone else is voluntary in the junior zap patrol, but she isn't exactly voluntary. She's there in the hope that she will reduce her parole if she does well. And so that's the part. In a lot of ways, I suppose she is like me. She's no-nonsense, she's gruff. And very loyal to those who do treat her with respect.”

Finding That Balance With Sox

Sox, Buzz Lightyear's robotic animal companion, is voiced by the talented Peter Sohn, who finds a great balance between robot and lovable for this character. That is what works so well about Sox. He gets right down to business but is still emotional and lovable. As Sohn points out, he has more of a dog personality, than a cat personality. Although, as viewers will see, he does have a lot of cat mannerisms.

“That was all Angus and the team. They're really fun to work with, and I've known Angus for a long time. We nerd out a lot on Wrath of Khan and our favorite Sci-Fi movies. It was really easy to go from a militant ‘Yes, Captain. Warp one lightspeed.' and then go into a friendly buddy.

“It's so funny, when we were talking about Sox, he's a cat, but he's so loyal like a dog, and I'm a dog guy. So I can totally jump into the idea of whatever you want. I'll bring you your snacks. I'll bring your newspapers. It was really in the room, but that was made with Angus the most.”

Chris Evans on Voicing a New Version of Buzz Lightyear

This is a different version of Buzz, not the one that fans already know and love. The Buzz Lightyear we know from Toy Story is just that – a toy. This is the man. When Chris Evans is asked about bringing this version of the character to audiences, Evans says that he was excited to get to explore a slightly more nuanced interpretation.

“The Buzz that we all know is obviously a toy. And as a toy, there are certain ways that they can move through the world without the weight that we may carry. A toy knows its purpose. A toy doesn't have to worry about disease. The downstream impacts of the choices that we make as people are a little bit more consequential, and it's fun to put Buzz against that backdrop.”

There is no doubt that Zurg is an iconic villain that Toy Story fans have a love for. You can’t have a Buzz Lightyear film without Zurg, but James Brolin admits that what helped him come up with this voice was knowing very little about the story of the movie.

“I walked in there cold. The night before I got a sheet with some of the dialogue. None of it quite made sense. It was one of five sessions. I thought I'll knock this out in a half-hour — four hours later of sweat with each session with Angus saying ‘try it like this.' Each day I learned more, of course, out of common sense, about what the character was about, but I had to piece it together. I haven't seen a polished film yet. And I'll see it tomorrow night to see what my character was all about. I have no idea.”

The Importance of the Same-sex Kiss

Pixar toyed with removing the same-sex kiss from Lightyear. But after a bit of backlash, decided against it.

Producer Galyn Susman explains, “It was very important. That whole relationship is about showing Buzz what he doesn't have. And we really just wanted to show a loving, meaningful relationship. And having a kiss as part of that. We were really, really happy that we could do that.”

Director Angus MacLane adds, “…certainly representation was something we were excited about. But more than anything, it's a reflection of the reality of the world that we live in. And we feel like science fiction was always my entrée into a more diverse society. Starting with Star Trek. At the time, (it) was very diverse for a movie, for a show of its era. And so it's in that spirit that we take from Star Trek of trying to find the most diversity we can in our cast.”

Is Lightyear Live-action in Andy's World?

Lightyear might be an animated feature from Pixar, but there has been much debate online as to whether Lightyear is an animated or live-action film in the Toy Story universe. Director Angus MacLane and producer Galyn Susman confirm during this interview that Lightyear is, in fact, a live-action movie that Andy watched, and not an animated film.

This is part of the reason they went with such a hyper-realistic animation style. The Buzz Lightyear in this film looks much more human, and has natural human proportions, compared to his plastic variation in Toy Story.

Composing the Music for Lightyear

Lightyear is essentially Andy's Star Wars, so an iconic score was important. Composer Michael Giacchino is the perfect choice to pull that off and when asked about what elements went into it, he explains it was easy to get inspiration.

“I pretty much was raised on [movies like this]. I ate them up as a kid. I used to sneak a small tape recorder into the movie theaters when I was a kid. And I would record the movie audio, and it would have the audience response, all of that on it. And I would listen to it. There was no VHS when I was growing up. There was nothing. There was no Internet. The only way for me to experience that movie again, when it was out of theaters, was to listen to it. So I would record them. And then I would sit at home. And every night, I would play them under my pillow.

“Because I loved to listen to how the sound worked in these movies, and how music worked with sound effects and dialogue and all of that. So it's like, ingrained in my head in a massive way. So working on this was like if someone had asked me, at 12 years old, hey, you get to make your own one of these things. What do you want to do with it?

“That's what I love about working with Angus, we always are sidelined into some crazy conversation about whether it'd be a movie from a certain era, or a character actor from a certain era, or whatever it is. We have such love for what came before and what introduced us to everything that we're now playing with today. It was not hard to find the inspiration for this.”

Lightyear hits theaters on June 17th, so get ready to go to infinity… and beyond.

Born Billionaires: The Cannon Family Is Among the Richest in America

Celebrity Endorsed NFTS: A Diamond in the Ruff or Highway Robbery