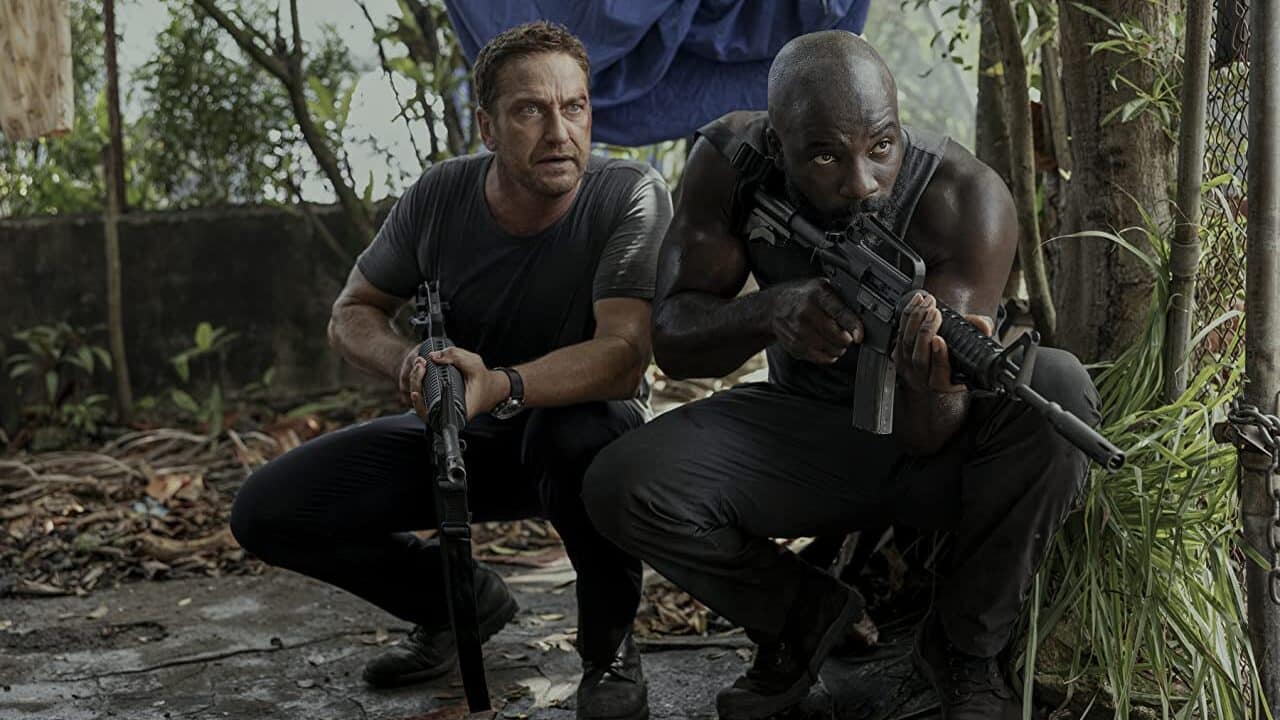 Plane, the new film from director Jean-François Richet, is far better than a January release action programmer has any need to be. It’s evident in several of the film’s action sequences that Richet, now in the third decade of his career, is more than a director for hire. But sadly, the film falls prey to a script that includes time-consuming and unnecessary subplots that slow the film’s action.

Plane could have followed in the footsteps of Michael Bay’s Ambulance as a simple film that uses its electric action to push through its rote story beats to greatness. Instead, the film spends too much time on charming but forgettable comedy and attempts at pathos that are far too obvious.

The story’s bones are solid: a New Year’s Eve red eye from Singapore to Tokyo with few passengers, including a potentially dangerous convict, makes an emergency landing on a Philippine island ruled by separatist militias. After a series of plot machinations, the convict Louis Gaspare (Mike Colter), an ex-military man, and the pilot must rescue the passengers from the ruthless leader of the island’s militias.

Nothing in this story is particularly original, but when it comes to action films, originality of story concept is unnecessary if the visceral thrills are there. Plane undoubtedly offers those thrills and does a surprisingly good job of making the audience care for its characters along the way. But it spends too much time on narratives that should have been excised to be a complete victory as an action movie.

The film introduces the archetypal widowed father-of-a-daughter action hero in pilot Brodie Torrance (Gerard Butler) and the secondary characters that make up the crew in a genuinely touching way. Brodie meets and takes time to get to know his young co-pilot, Dele (Yoson An). Lead flight attendant Bonnie (Daniella Pineda) prepares for the flight with Brodie and the other attendants in a scene that allows the audience to spend a mundane moment with these characters. Those few moments before the action starts make the film’s many effective spectacle sequences land emotionally as well.

As with any good action movie, it doesn’t take long before the action starts. Shortly after taking off, the plane runs into a storm. It is struck by lightning, robbing the crew of the ability to communicate with agencies on the ground and forcing them to make an emergency landing. The crash sequence is breathtaking: Richet’s camera shakes the perfect amount to convey the chaos without becoming nauseating or obstructing any of the action. The few exterior shots of the plane racing through storm clouds emphasize how horrific the impact would be if the aircraft were to crash.

That action filmmaking craft appears again in the film’s first combat sequence, which sees Brodie grappling with a militia member in an unbroken (or at least well-faked) single take. It’s a fight scene with almost no strikes, instead focusing on how the two large and incredibly strong men struggle to overpower one another. That struggle is made all the more palpable by Richet’s refusal to cut, using the camera to follow them around the small room, over a table, and ultimately to the ground.

Much of the combat then becomes more gun focused. In these battles, Richet keeps the geography clear while including some over-the-top moments that keep things fun and pulse-pounding. The best of these battles involves a 50-caliber sniper rifle that sends its victims flying, whether they’re shot directly or through the body of a vehicle.

The action sequences in Plane are so much better than a January action programmer needs, and the core cast of characters is well-developed. It could have been a surprisingly great January release, but in the end, its subplots hold it back by slowing it down too much. There aren’t even too many subplots; it’s just that the two here draw away from the excitement of the film’s main story. The first subplot centers on the crisis team at the airline’s headquarters in New York and the second shows Brodie’s daughter Daniela (​​Haleigh Hekking) in Maui, where he is meant to spend the holiday with her.

The crisis team scenes at least offer some humor, but the time the film spends in New York and Maui literally pulls the audience away from the action in the Philippines. It’s a strange narrative choice as both storylines could easily have been cut from the film without losing anything. The emotional core of the film isn’t the relationship between Brodie and his daughter back home; it’s the relationships between Brodie and Gaspare, and Brodie and his crewmates. While the crisis team eventually leads into another more necessary plot development on the island, that development would have been more exciting and unexpected without the unnecessary lead-in.

Plane is a good action movie that could have been great had it cut out its unnecessary subplots and focused entirely on its fantastic action sequences. It’s certainly not a failure and is worth seeking out for action fans, but it won’t have much of an impact beyond this month.

Parental Fears Get a Plodding New Voice in ‘Skinamarink’