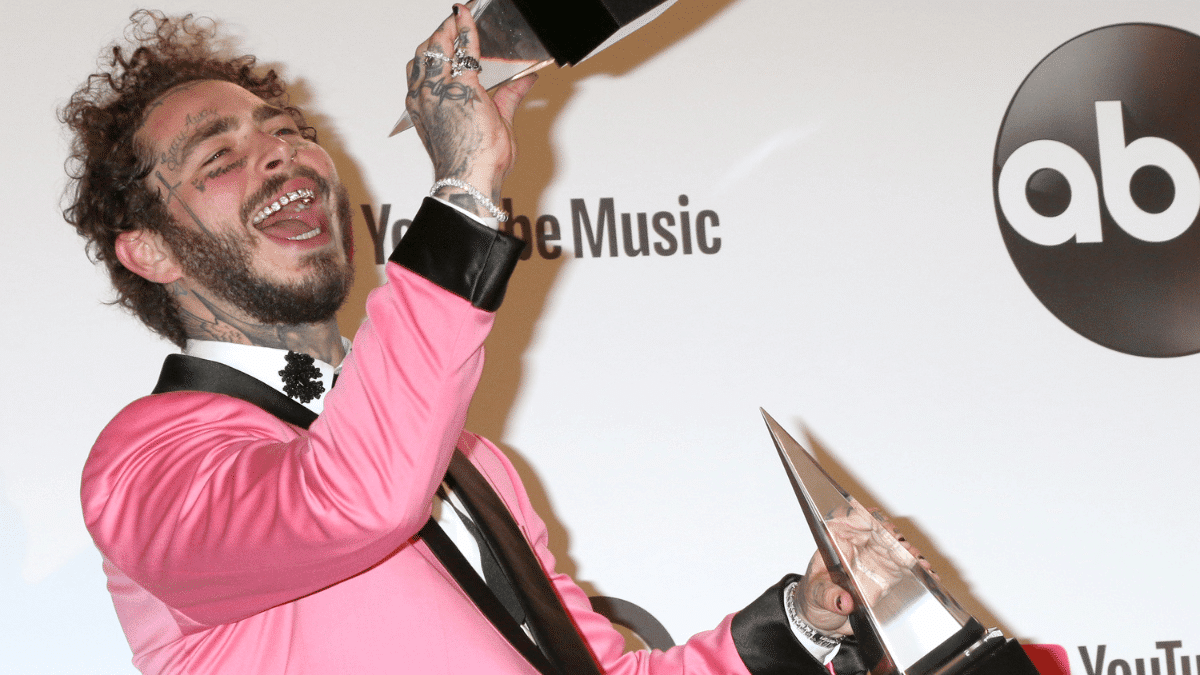 If Post Malone's face tattoos don't make you do a double take, his net worth surely will.

Austin Richard Post was born in Syracuse, New York, on the 4th of July 1995. You probably know him better by his stage name, Post Malone – rapper, singer, and songwriter.

He was raised by his father, Richard Post, and Jodie, his stepmother. Richard was a DJ when he was a young man and introduced Malone to several genres of music, including hip hop, country, and rock.

When Malone was nine, he moved with his family to Grapevine, Texas, because his father was appointed manager of concessions for the Dallas Cowboys.

He initially started playing the guitar after playing Guitar Hero and, in 2010, auditioned for the American band Crown the Empire. However, he was rejected after his guitar strings broke mid-audition.

Malone's first foray into professional music came when he was in a heavy metal band. Not long after, he transitioned to softer rock and hip hop before starting to play around with the digital audio workstation FL Studio.

According to Celebrity Net Worth, Post Malone has a net worth of around $45 million. That puts him on par with Kendall Jenner, Uma Thurman, Billy Bob Thornton, and Fergie.

Most of Post Malone's wealth stems from his work in the music world, but he has dabbled elsewhere. So let's take a look.

A hugely successful artist, Post Malone has released four studio albums, one mixtape, and 34 singles (including a dozen as a featured artist).

He's sold a whopping 13 million albums in the United States and 95 million digital singles, which makes him the eighth best-selling digital artist of all time.

As a result of his success, Malone was ranked by Billboard as the tenth top artist of the 2010s. His only mixtape, August 26, was released in 2016 to critical acclaim.

His four albums have all been big success stories. In 2016 his first one, Stoney, reached number four on the Billboard 200. His second and third, 2018's Beerbongs & Bentleys and 2019's Hollywood's Bleeding, reached number one. His fourth, Twelve Carat Toothache, hit the number four spot in 2022.

Post Malone has now taken his first steps into the world of business. In 2020, he launched his own line of French rosé wine, Maison No. 9, which is named after his favorite tarot card, the Nine of Swords. It sold out within two days.

Later that same year, the star acquired a minority stake in esports and gaming company Envy Gaming (now OpTic Gaming), becoming a co-owner of the organization.

Malone has also dipped his toe into the world of acting. He voiced Brooklyn Bystander in 2018's Spider-Man: Into the Spider-Verse, played Squeeb in 2020's Spenser Confidential, and played Robber #6 in 2021's Wrath of Man.

As you would expect of a man with Post Malone's fortune, he lives a life of luxury, spending his millions on many extravagant items and services.

Malone owns an impressive fleet of cars, with the star purchase being a $3 million white 2019 Bugatti Chiron. He also has a Rolls-Royce Phantom, an F-150 Raptor Baja Racer, a Chevy C10 pickup truck, and a Subaru WRX.

He also spends considerable money getting food delivered to his home, with Postmates calling him their number one customer. In 2018 alone, he spent more than $40,000 on Postmates deliveries, comprising 3,000 items on 660 orders in 52 cities. His favorite fast food restaurants include Chick-fil-A, Ralph's, Burger King, and Popeyes.

All things considered, Post Malone remains one of the biggest stars in the world, period, with no signs of slowing down.

He's a colossal name and continues to thrive, whether through musical endeavors, brand endorsements, or various business ventures.