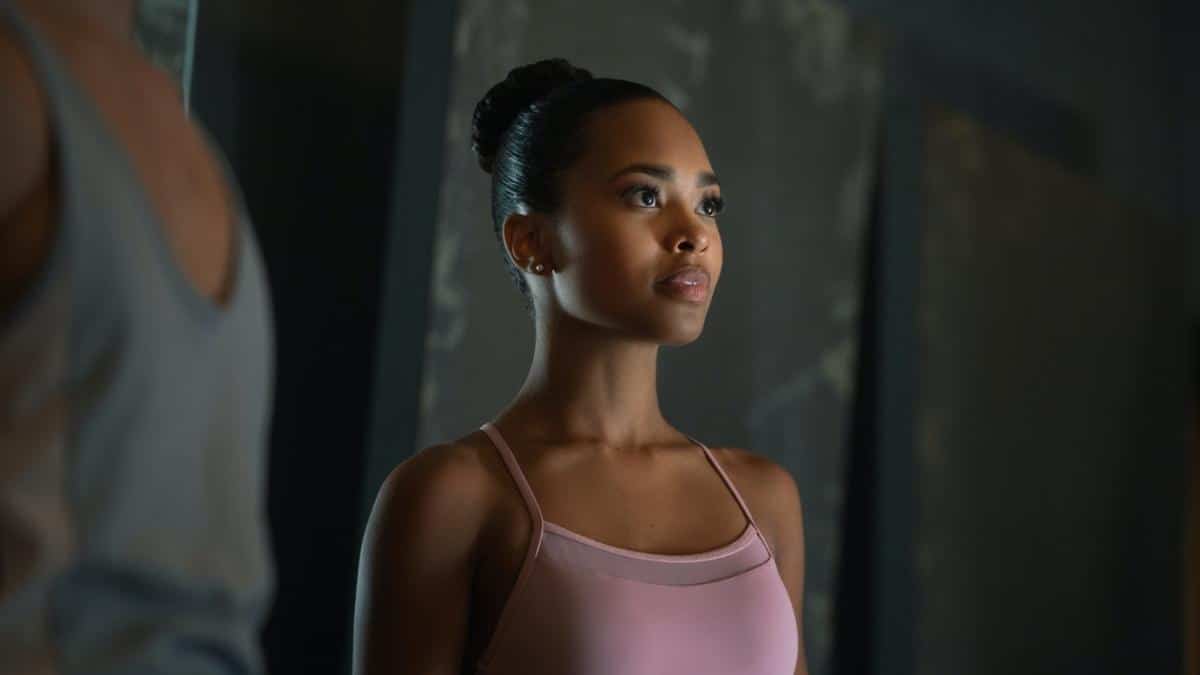 Episodes six and seven of Pretty Little Liars: Original Sin are the first to directly tie this reboot to the original, the most focused on the mystery of Angela Waters, and the worst of the first season thus far. The secret of Angela continues to be intriguing. Still, the show's attempts to connect this story with the story of the original is at least confusing and at most frustrating. And in these episodes, the show's penchant for ticking issue boxes comes center stage as Tabitha and Imogen open up to one another about their histories of sexual assault.

Early in episode six, we learn that Angela's mother, Rose attacked a group of boys at the school after her daughter's suicide. After this, Rose was sent to Radley Sanitarium in Rosewood, a place central to much of the original show's storylines. Tabitha and Imogen decide to take a trip to Radley, now a luxury hotel, to see what they can discover.

They meet Eddie Lamb (Charles Gray in Original Sin, but played by Reggie Austin in the original series), a former orderly at Radley who appeared in the original show. The idea of bringing these two stories together, or at the least confirming that they take place in the same universe, is a bit annoying and unnecessary but somewhat expected given the nature of franchises. What's unexpected and downright rude to fans is to recast the character connecting the two shows.

To add to that confusing disservice to fans and the character of Eddie, Tabitha goes out to explore Rosewood and goes into a bookshop called “Ezra's Books.” Luckily we're spared a cameo from Ezra (Ian Harding). But given that we don't even see the character, it's baffling that the main character from the original show that the writers chose to reference is a predatory man who dates one of the Liars.

Perhaps it's a purposeful reference, given that the episode puts sexual violence front and center. It opens with Tabitha recounting her experience at a bonfire party in the woods last summer to Imogen. She tells her friend that she was having fun at first, but she got woozy, things started to blur, and the last thing she remembers is someone on top of her.

Kinney does her best with the writing she's given, but it's so incredibly earnest, and her cadences (which I blame on episode director Cierra Glaude, not Kinney) are so awkward that instead of ever feeling real, the entire thing feels like a poorly handled PSA. That feeling only gets worse when Imogen's response is a weirdly competitive “I remember even less than you do.”

We don't hear more about Imogen's assault until later in the episode. When we do, it shares the same awkwardness and over-cranked sincerity, only to be met with an inquiring “any idea who he was” from Tabitha. The girls' responses to one another seem entirely human, especially for sixteen-year-old girls. Still, they're so fundamentally at odds with what responses to disclosures should be that they cause a strange disconnect for the show.

Is the show attempting to make classic issue style “Very Special Episodes” that address sexual assault and the resulting trauma? The way that Tabitha's response to her assault is highlighted in the episodes sure makes it feel like it. Or is the show attempting to depict the real, imperfect ways teens respond to trauma? Or thirdly, is the show simply trying to add another mystery to its laundry list of mysteries?

That final one feels most likely and most upsetting. Sexual assault shouldn't simply be a plot point. For all the complaining we hear about Game of Thrones's overuse of sexual violence and the disappointingly frequent “there shouldn't be any sexual violence in media” Twitter discourse. This is the first time I'd agree there is no need for sexual violence in this story. And it's not because there's any sexual violence depicted. It's because the show seems to be having its cake and eating it, too, by emphasizing Tabitha's trauma while using her and Imogen's assaults as further plot drivers.

But sexual assault isn't the only serious issue that the episodes tackle. We learn about Faran's scoliosis and that her mother, Corey, had her daughter undergo surgery as a child when doctors advised against it. Corey wanted her daughter to be as “beautiful” and “strong” as she could be. But, of course, those concepts of beauty and strength are Corey's specific ideals of what those things mean. For her, these ideals mean her daughter looking like she never had scoliosis, more than actually addressing Faran's pain.

There's also the ongoing issue of Noa's mother, Marjorie's, drug addiction. We finally learn about what happened to Mouse as a child that makes her mother Elodie so protective. When Mouse was five, a man almost abducted her at a Carnival, which is part of what drives her habit of connecting with men who have lost their children online.

At least the questions of who assaulted Imogen and Tabitha aren't the only mysteries the show has to offer. There are continuing questions surrounding Angela Waters and how she's connected to the “A” terrorizing the Liars. Questions about Mouse's habit and where it will lead continue to abound despite some answers in these episodes. And, of course, there's the primary question of who A is.

After a genuinely unnerving start to the Mouse/Steve storyline in the last episodes, these newly released episodes bring the story into more disappointingly familiar territory. Steve starts to appear in places Mouse goes, and she tells him they had their one encounter that she allows, and now he needs to leave her alone. But in one of their confrontations, he tells her Elodie is part of a support group for parents of abducted children, raising further questions about Mouse and Elodie's past.

Imogen and Tabitha's trip to Rosewood and their meeting with Eddie reveal that a group of young women came to visit Rose during her time at Radley. Unsurprisingly Eddie identifies the group of moms as the young women who signed in as “A. Waters.” But intriguingly, Tabitha notices that there are, in fact, six and not five distinct “A. Waters” signatures in the logbooks that Eddie shares. And in keeping with the episodes' heavy thematic interests, the girls learn that Angela was raped.

Luckily the show doesn't only wallow in its characters' various miseries or drive the plot unfeelingly forward. Instead, these two episodes offer some more of those sweet moments of friendship I missed in the first half of this season. There's significant time and attention devoted to Faran's performance in Swan Lake and how the girls will all be there to support her. But most of this sweetness comes from Tabitha and Imogen's trip to Rosewood and Mouse's developing relationship with Ash.

On their way to Rosewood, Imogen and Tabitha sing along loudly to Alanis Morissette's “Ironic” in the car. Once they arrive, and Imogen spends what must be at least a third of the money meant for the mortgage on her childhood home on a room, the two joyously dance around the luxury suite as only teenagers who are experiencing wealth for the first time can.

Mouse and Ash finally go on a proper date, albeit it's a not-so-exciting bowling date. But more than any moment on the date itself, the cutest moment comes after Ash asks her out, and she literally gets a pep in her step. And he continues to be the best boy on the show when he takes Mouse on a second date to the carnival, her first time since she was a child, and is supportive of all of her choices for entertainment.

A Classic for a Reason

Sadly (for the characters), Mouse and Ash's carnival date turns into one of the best horror sequences the show has delivered thus far. The two are chased by the masked figure the girls are calling “A” in a house of mirrors. While sequences like this have been a staple of the genre for decades, it's for a good reason.

The mirrors make it hard to know where anyone is in relation to each other and to the space around them. A house of mirrors is a disorienting space that unnerves the characters and the audience. But throwing a masked killer into one makes the entire situation pure nightmare-fuel.

What Are We Doing Here?

Episodes six and seven of Pretty Little Liars: Original Sin raise the question of what the show aims to do. With its invoking of sexual assault, is the show attempting to be a serious issue drama, or is it just using something vile as a plot driver? More than that, is the show interested in delivering horror (there's only one effective sequence in these episodes), mysteries (certainly), or character-driven drama (unclear as of yet)?

As of now, it feels overstuffed, and the issue from the last two episodes remains that there isn't enough time. But in episodes six and seven, that lack of time is even more greatly felt as new priorities are introduced. So at least these two episodes slow the movie referencing. Though there's a disappointingly, but unsurprisingly, shallow discussion of rape-revenge films at Tabitha's job to ensure that no more than two scenes go by without mentioning sexual assault.

It seems that time is now less of an issue than this adjustment to a central social issue focus. Because the show is so committed to being a show about sexual assault (and not a very good one at that), almost all other aspects feel like they are falling to the wayside. Hopefully, the final three episodes prove me wrong, but I won't be holding my breath.

A Cancun Mexico Vacation That Will Blow Your Mind!