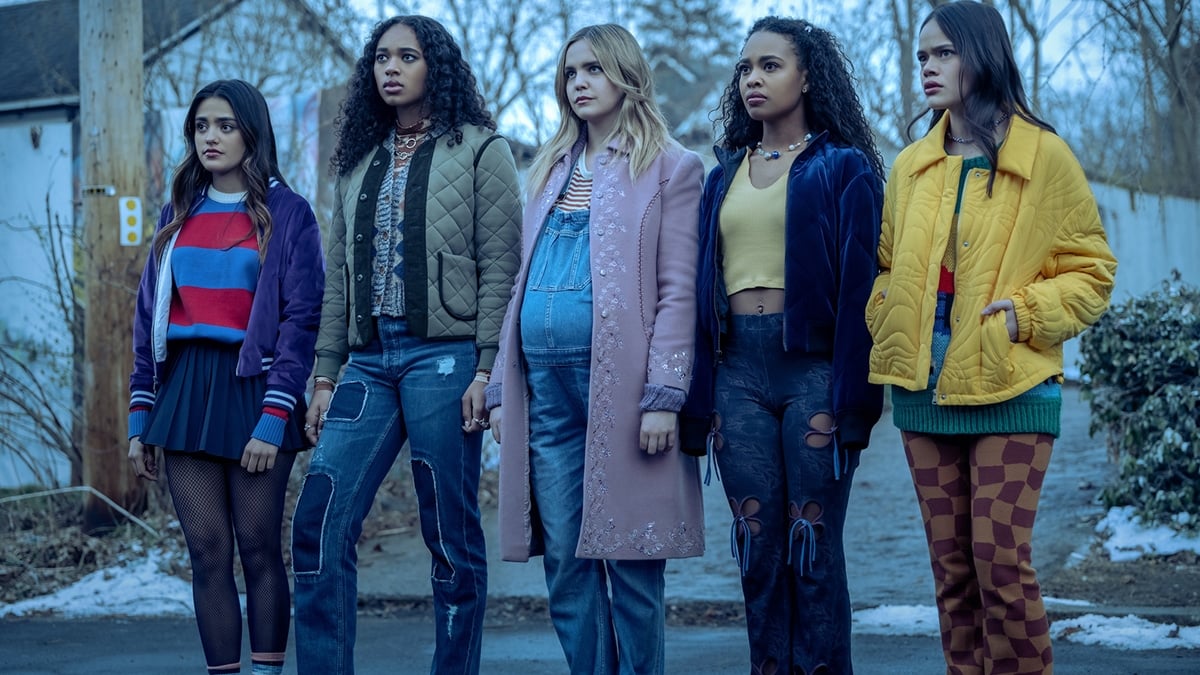 There are some genuinely fantastic moments in the last three episodes of the first (and perhaps only) season of Pretty Little Liars: Original Sin. There are some lovely scenes of the girls being friends, Mouse and Steve’s storyline continues to fascinate, and some big swings feel reminiscent of the original show. But those moments cannot save the show from the overstuffed narrative and ideological nightmare it has become over its ten episodes.

After last week’s turn to centering the show around the issue of sexual assault, the final three episodes continue to focus, arguably unduly, on the subject. But the problem isn’t (only) that sexual assault has become the show’s focal point; it’s the continued simultaneous severity and indelicacy with which the topic is handled.

What’s worse is that the show’s commitment to connecting its social issue commentary with media commentary leads it to make a genuinely abhorrent connection in this season’s penultimate episode.

In these final episodes, plot points are introduced and done away with within minutes, and plot points that initially came up early in the season return without satisfactory resolution. But, of course, that makes sense because the show has to cram an absurd amount of plot and exposition into its final three episodes to wrap this thing up within ten episodes.

The moments of the girls simply being friends and the development of Mouse and Ash’s relationship continue to be some of the brightest spots. They show these girls have lives outside the horror of their experiences with A. Ironically, another bright spot is the horror sequence that feels lifted directly from a Saw film (to be very clear, that is a compliment).

Ash and Mouse continue to have cute moments while surrounded by drama. In one of their conversations, Ash says that he’s trans, but it feels less like a coming out than a simple aside which is a lovely surprise for a show that’s so eager to show off its social issue credentials. Ash even makes a scene with Steve somewhat cute simply because he is supportive of Mouse and her decisions.

The three go bowling after Mouse attempts to meet her birth father, and he shows no interest in knowing her. It’s a scene that’s icky and uncomfortable in all the right ways. Of course, we all know something wrong is going on here, but it’s played as somewhat wholesome even as a sense of anxiety undergirds the entire scene.

Surprisingly not anxiety-inducing, despite some apprehension from this viewer, is the scene of the girls going clubbing. They decide they deserve a break from their lives and to just have a fun night out dancing after pulling off a significant scheme (more on that in a moment). The scenes of them dancing are brief but sweet.

They’re followed by the first sequence of movie-name-dropping in the show that’s enjoyable instead of annoying. Tabitha asks the girls what their favorite clubbing movies are. Among unsurprising picks like A Night at the Roxbury and The Last Days of Disco, we also get the unexpected Climax pick from Faran and genuine deep-cut Party Girl from Kelly.

And without any reference to the Saw films, the season finale includes several characters being trapped and used as pawns in “tests” for our core group of five Liars. One character is tied to a chair and is meant to be mutilated, another is strapped down to a bed so that he can be injected with something, and the other two are to be tortured with mouse traps (take a wild guess who that’s for) and jumper cables. It’s a genuinely terrifying series of images that lands among the best of the show’s horror highlights.

Along with these single-scene bright spots, some plot points feel lifted from the original Pretty Little Liars and offer the same kind of “oh my god, I cannot believe this” joyous thrill.

The first of these good messy sequences is the focus of episode eight: the Liars will steal blood from the school’s blood drive to compare D.N.A. from the samples to Imogen’s baby’s D.N.A. Setting aside the issue of a child that’s a product of sexual assault being used as a plot point, the girls’ planning and executing their heist is a pure delight. It’s the success of this scheme that leads to the clubbing celebration.

While jumping to conclusions is a staple of the original show and Original Sin, nothing has delivered the same high as the Liars believing they’ve discovered the identity of A. Only to find that character has hung themselves a few minutes later. The blatant red herring is a common trope in the original that gets played with at least three different characters.

But that’s not all! After that red herring character seems to die by suicide, Imogen considers the possibility that her mother did not take her own life. She reaches out to the coroner, who tells her she must file a formal request with Sheriff Beasley, who tells her to get a signature from her father. The hilarity of the exhumation bureaucracy aside, the payoff comes when we (and Imogen) learn that the body has already been exhumed, but the question then becomes: by whom?!

It’s a scene that specifically brings to mind the Pretty Little Liars season three plotline of who left Emily at Ali’s grave. But more generally, it feels like the wild soap opera-style plot point that made the original so much fun.

Another soap opera moment comes when we learn that it was one of the adult men in the show who assaulted Angela when they were in high school. But unlike the other messy moments of the show, this feels at odds with the show’s apparent desire to treat sexual assault as an important and sensitive issue.

The “everything is connected” aspect of this reveal is fun, but the content of that connection is too serious to be played as a fun reveal in a show that can’t make up its mind about how to treat sexual violence.

The reveal of Angela’s rapist isn’t the only time the show uses rape as a plot driver. It’s also the heart of one of the show’s central mysteries: who assaulted Tabitha and Imogen? And was it the same person? But the way that the characters in the show talk about sexual assault is exhaustingly earnest and frankly problematic despite the clear desire to show sensitivity.

Almost every time a character says “assault” or “rape,” they take a long, scandalized pause before saying the words. I guess it’s meant to emphasize how serious the issue is, but it quickly becomes tiring and transparently hollow, especially given that “rape” is said so often it could become the only rule in a drinking game for the show.

If that sounds flippant, that’s precisely the problem. The show wants to engage with sexual violence in a way that wins it points for engaging with a serious issue, but at the same time treats that issue as nothing but another fun mystery.

What turns the focus on rape from upsetting and insensitive to something downright detestable is the way that the show connects sexual violence to media consumption. During their investigation, Tabitha and Imogen discover that their new prime suspect has some (as described by Tabitha) “weird, gross … hardcore … rapey horror movies.” The two we see clearly are I Spit On Your Grave and Straw Dogs (which is not generally considered a horror movie). We can glimpse what seems to be the edge of Irreversible (a film directed by Climax director Gaspar Noe).

These are rape-revenge films, and none of them depict rape as anything less than horrible and horrifying. Tabitha’s description of the films as “hardcore” is fair enough, and “gross” is a matter of taste (in fact, I agree that Straw Dogs is pretty gross). But to describe these films as “weird” shows a fundamental lack of media literacy and knowledge.

And the show’s decision to reveal that the suspect who owns these films is ultimately both Imogen and Tabitha’s rapist is disgusting. The inclusion of the films is unnecessary and does nothing but show that the writers and showrunners seem to believe that violent media consumption and immoral actions go hand in hand. It’s an argument that’s been debunked by numerous studies, and it’s genuinely disturbing to see a show with a broad audience peddle this kind of harmful nonsense.

What’s less disgusting but similarly frustrating is that Tabitha’s (or rather the writer’s) lack of knowledge and literacy also shows up in an earlier episode and other conversations about rape-revenge films. Tabitha says she wants to make a rape-revenge film of her own and “reframe the…genre through a feminist lens.”

There have been rape-revenge films written and directed by women since the 1970s. More recently, there has been a boom of explicitly feminist rape-revenge movies directed by women. Films like Coralie Fargeat’s Revenge, Mouly Surya’s Marlina the Murderer in Four Acts, and Natalia Leite’s M.F.A. are just some of the highlights from this thriving sub-subgenre. Unfortunately, it’s just another instance of the show doing a disservice to a character who has become the mouthpiece for several incorrect and offensive opinions about cinema.

Pretty Little Liars: Original Sin showed promise, and even in its final three episodes, there are some moments of greatness, but the first season is ultimately brought down by incredibly unnecessary attempts at thematic heft and even more unnecessary media commentary. The moments of the girls being friends are infectious, some of the mysteries manage to hook you, and the more over-the-top moments in the show are a lot of fun.

It’s a show that could have met the heights of its predecessor, but the commitment to tackling the too-serious issue of sexual assault and intertwining that with not only incorrect but irresponsible commentaries on film and film history make the show a significant disappointment.

Did Amazon Buy Irobot to Spy on You?