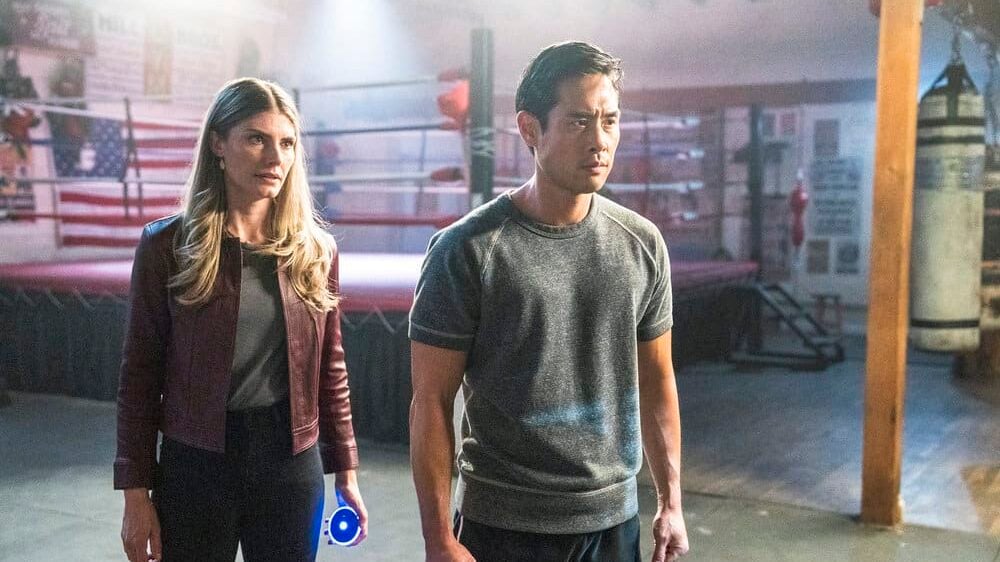 Let me start out by saying I am actually a fan of the new Quantum Leap. It's not yet won a place in my heart with the original – Ben and Addison are no Sam and Al, but as these things go, it's up there. For starters, it's the only new broadcast show I'm taking the time to watch each week cause I want to, not just cause someone needs to cover it.

And I hate that it might seem like I keep bagging on the relaunch of one of my favorite shows. Honestly, it’s not terrible. It should be getting more viewers, rising in the ratings – as much as any new network show can. But…

Last week, my complaint was that the episodes were making up history, instead of sliding into the cracks in the reality that we know, the way the best historical fiction does. When you make up significant events, it lowers the stakes on the show, and opens gaps for complaints that it isn’t taking itself seriously. I commented that the original Quantum Leap – which, let’s be honest, this will always be compared to – was always more historical fiction than science fiction.

This week, I feel like the writers need to be reminded that it IS also science fiction.

Ask Neil De Grasse Tyson, or read Stephen Hawking, and they’ll say more or less the same thing. An echo of what scientists have been saying pretty much since HG Wells published his most famous novel in 1895.

Yes, time travel is possible – going only one way. In fact, Tyson loves to go on about how most understandings of time travel in science fiction and pop culture are impossible, even taking into account Einstein’s Theory of Relativity. And that’s okay. We know the Tardis isn’t real; Skynet isn’t sending robot assassins to the 20th century, and Marty can’t really disappear from the Polaroid.

And we don’t care – with one caveat – once you establish the rules, you can’t just break them at will.

In the pilot episode of the original Quantum Leap, Al explains Sam’s theory of time travel with an illustration involving string. In reality, string theory involves causality – something we sometimes call bootstrapping – if time travel happened, then it always happened. Sam was always in that body, winning that car race, singing “The Impossible Dream,” inspiring Stephen King, or the whole thing falls apart. Unless there really is a force outside of our normal physics like God controlling the leaps.

But in Quantum Leap, the rule is, you can time travel within your own lifetime. Period.

“One end of this string represents your birth. The other end, your death. You tie the ends together, and your life is a loop. Ball the loop… and the days of your life touch each other out of sequence. Therefore, leaping from one point of the string to another would move you backward or forward within your own lifetime. Which is our project, Quantum Leap!”

All that to say, when Ben uploaded the new algorithm to Ziggy to try and better control the leaps, his ‘removing safety protocols' would have NO effect on the ability to time travel solely within his lifetime. Within the lifetime is baked into the show’s science, flawed as it may be. The only time they broke that rule in the 90's show was in “The Leap Between the States,” justified by Sam having the same DNA as his grandfather – which is also BS, but at least was semi-excusable.

So Ziggy's Not the Most Powerful AI Ever – Anymore

My second hangup was when Ben asks Addison if Darryl was going to kill himself even if Danny/Ben won the fight. She responds, “There’s no way Ziggy can know that.” Sure, technically that’s true – and I get it, they wanted to get to the part where Addison draws on her own knowledge of other former soldiers with PTSD to answer the question.

But the problem is, Ziggy’s biggest strength is not just coasting through history – it’s using all the facts and her computing powers to calculate probabilities. In nearly every one of the 97 episodes of the original Quantum Leap, Ziggy would not just determine what Sam needed to do to leap, she’d calculate the probabilities of each potential – and the potentials if different actions were taken. Extrapolating, predicting how the future will change, based on what is or isn’t changed is LITERALLY the main thing Ziggy does.

Or did. She must have gotten downgraded in the years since she’s been offline.

Nitpicking aside – hey, I write for Wealth of Geeks, part of being a geek is picking this stuff apart – this is probably the strongest episode of the not a reboot. Other than Ian repeating himself twice in 5 minutes, the “back home” events are kept to more of a minimum. Except for one spectacular reveal I’ll get to. We spend a lot more time with Ben on the leap, we get to see some really cool handlink upgrades and Ben and Addison do a fun rock ‘em sock ‘em robots style reenactment, thanks to Ziggy.

The leap is much more high stakes, more emotional. We get to see how Addison deals with her fiancée in the arms of another woman. We get a stellar scene of Ben doing something Sam was always great at – that moment of convincing, really delivering the heart of the person he’s leapt into in order to change a relationship’s history for the better. It’s Raymond’s Lee’s best scene so far in the show – still natural, but channeling, infusing Ben’s personal needs and desires with the person he’s leapt into. It’s clear why he was cast.

We get to see more than a little hint of desperation from Addison as well, the effort she’s putting in sending her to the project’s medical ward for a couple of hours. And ultimately, Ben succeeds and then leaps because he’s able to be both Danny Hill and Ben Song – using the best traits of both.

One other little nit-pick – from my own days in law enforcement – the costumer on this episode pulled a little blunder (or maybe the producer insisted, I don't know). But when the cops come to arrest Darryl for assault, an officer bearing Captain's bars is the one who arrests Darryl, and then comes back in and puts cuffs on Danny/Ben. Captains supervise. Even in 1977, they wouldn't be coming down making the arrest – unless maybe TV cameras were there. You've got 8 cops – the beat cop with no rank or maybe the Sergeant does the arresting. Not the Brass.

We also get a little more of Janis Calavicci’s story. We get to actually see all of her, and hear her clearly, when she visits her mom, Beth. Still not sure why she was so obsessed with getting Sam back, especially in the years since she was kicked out of the program, seemingly well before the Admiral passed on.

But she certainly is ruthless – she doesn’t mind being the bad guy if it gets her what she wants. What is that? We don’t know, but there’s a significant reveal at the end – she’s not just a complication – she’s a solid antagonist, if not full on villain that Ben and Addison will have to deal with at some point, if Magic and Ian can’t stop her sooner.

Last episode there was a nice Easter egg that I personally missed. The female astronaut on the Atlantis is the daughter of Tom Stratton, the very first person Sam leaped into in the “pilot” episode of the original show. Tom was a test pilot, and in the original history, Tom died testing the Bell X-2 – a very real rocket-powered, swept-wing research aircraft developed by the Air Force. When he crashed, his wife Peggy went into premature labor, and their second child died. Because of Sam & Al, not only did Tom survive, but Sam supplied late 1990's medical knowledge to the doctors and the child survived and was born.

And even if you missed that – as, again, I did – the inter-space-time map that they found on the drive from Janis and Ben's work shows a clear pattern of leaps – the assumption being that Ben is, more or less, tracing Sam's path across history. Late in this episode, Ian suggests that Ben's algorithmic changes are producing an acceleration, as well as allowing him to leap outside his lifetime (a whole lot better explanation than the safety protocols nonsense at the beginning). But, again, strangely, none of those genius-level intellects can figure out what's obvious to the fans (and part of the mediocre new saga sell) – Ben's trying to get to Sam.

And some of the simplified walking through they do with concepts for the audience, why didn't they add a line about Ziggy noting the Stratton connection? Okay, that I can excuse for story reasons — Ziggy might be protecting Ben and Sam's work – or being influenced by Janis, since she's now piped in. All that to say, I didn't see an obvious connection to a Sam leap in this episode. It's been seven years, maybe Darryl Hill was part of the platoon that Magic served in and Sam leaped into – perhaps after he leapt, cause Magic is the only significant soldier of color in that episode? We'll see. I'll be checking Twitter as soon as the episode airs on the West Coast.

And in the final moments, we get a preview, per usual, of the next leap. Ben is in a role that Sam didn’t even get to until Season 2 – let’s just hope he knows how to walk in heels…

Quantum Leap airs Mondays on NBC and streams the following day on Peacock.