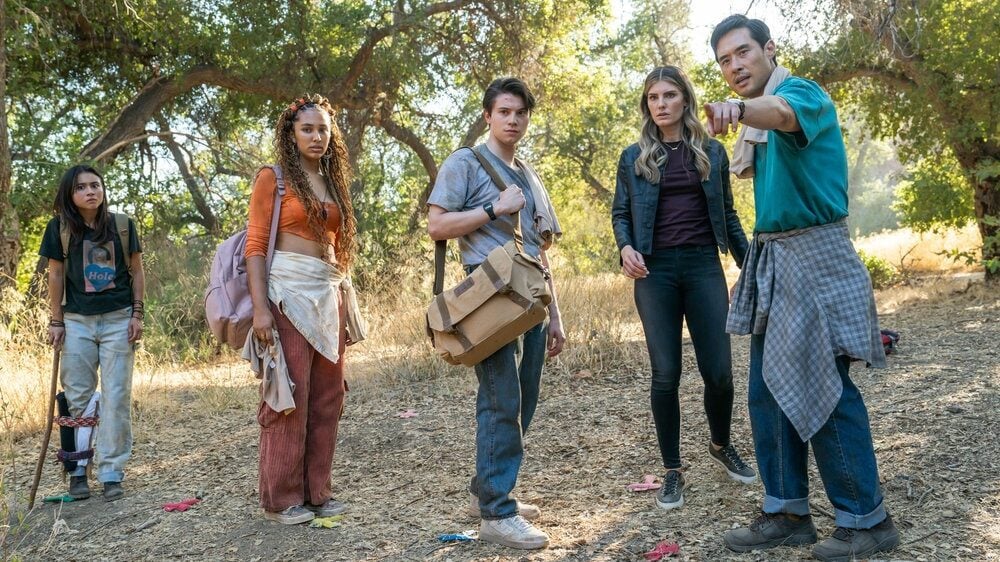 Call me pessimistic, but I honestly didn’t expect this week’s episode of Quantum Leap to scale or surpass the heights of last week’s Halloween episode.

“O Ye of Little Faith” was a watershed moment for the relaunched show – the most highly anticipated and easily the best episode so far. So, no, I wasn’t expecting “Stand by Ben” to top it. And mostly it didn’t – but that is by no means a criticism. The episode is a good solid leap story told, and that’s enough.

But that’s not all it is. For starters, we see Ben learning from his past leaps. While Sam Beckett’s quest was “to put right what once went wrong,” we get the sense that Ben is also learning what is right. Not in a moral sense, but coming to a clearer understanding of what God or fate or time wants him to do.

As Addison mentioned a few episodes ago, Ben is softer, more vulnerable. He’s becoming more open-minded, and more in touch with his feelings – even if they’re other people’s emotions channeled through his leaps. I don’t know that the Ben who leaped into the undercover cop/getaway driver would have counseled Leah to try and forgive her parents. And he almost certainly wouldn’t have told Stacy that offering said forgiveness would be for Leah’s benefit.

Not without what he’s experienced. Yes, the moment in last week’s episode where Daisy offers Godly forgiveness, but he’s also drawing on the little bits of life experience that he’s picked up living other lives for 8 weeks (in our time). Ben is portrayed as awkward, but not the cold, calculating, emotionless physicist we often see – in media and in real life. But he’s definitely changing. Like Sam Beckett, he may have leaped for a very specific reason that didn’t involve helping a lot of strangers. But that didn’t stop a force beyond either of their control (supernatural or AI, you can decide) from using what was intended for adversity – for good, to accomplish a day like this, preserving the lives of many people.

But I’m getting ahead of myself.

We saw last week, that Ben leaped into – Ben, in this case, a 16-year-old kleptomaniac in 1996. He’s in the midst of an escape attempt, orchestrated by himself and 3 other “troubled” teens from the Sierra Youth Academy. We learn later in the episode that, while these kids do have issues, the Sierra way of dealing with them is much darker, if not downright illegal. Especially when you consider one of the girls was sent there primarily because her religious family was troubled by her being attracted to other girls – in 1996.

The teens have a ridiculously optimistic plan – as teens often do – of what they’re going to do with their lives after they escape. Ben’s a bit flabbergasted at first, and then suddenly, Stacy rolls the stolen vehicle off the road and crashes. Everyone survives, but Addison shares with Ben that in the original history they all died – and the camp covered it up, claiming they went on a hike and got lost.

At the same time, Ben is remembering more and more – and shares with Addison his final moments with specter-turned-hologram Janis (I’m still not completely buying the explanation that she was the demonic presence from the beginning). Addison is concerned, but it does sound like Janis was trying to help. Maybe?

Meanwhile, Leah has noticed Ben talking to Addison – something he often does without fully considering the consequences. No, I’m not complaining. While the original often took pains to give Sam excuses to talk to Al without being noticed, they would often fall prey to the trope of speaking and thinking no one can hear them. It happens a lot on television – I don’t know how people think they’re being secretive speaking at normal volumes into their lapel mics. LOL.

Anyway, Leah asks if Ben has an imaginary friend – or maybe several? She implies that there’s more to her incarceration than just her sexual preferences, but we don’t really come back to that. And of course, she shares Ben’s revelation that he has an imaginary girlfriend with the others, which creates some fun moments.

Ben does his best with the teenagers, trying not to be frustrated – he’s not always successful – as they journey towards a supposed cabin in the woods. And he keeps remembering! Being a good leaper, Ben draws out each of the young people’s strengths over the course of the episode and tries to help them reinforce them.

One fun moment is when the group stops for the night and find themselves surrounded by wolves. Leah makes a suggestion and Ben decides to go with the moment, the first time since he’s been there that the group works fully together to save themselves (since he didn’t really plan or assist in the escape).

Feeding off Addison’s revelation from Ben that Janis contacted him, they come to the conclusion she has her own imaging chamber. I presume since she and Ben were working together, that they programmed in her mindprint to his and vice versa, like Sam and Al, and Addison and Ben did when she was supposed to be the leaper and he the observer.

Jenn hustles to track down Janis’ location, surmising that she would need the same power considerations for her imaging chamber that they do – or at least comparable. Other than not anticipating the lockdown, these geniuses are finally acting like they’re as smart as they say they are.

Oh, and Jenn is ignoring calls from her dad, and Magic knows it. Magic and Jenn go to confront Janis – and get trapped in the elevator during the lockdown. A lockdown that Janis likely initiated since she has eyes and ears inside their systems.

Magic tells Ian how to do his job and Ian (no cat ears for this e-meow-gency) gives him an earful. Good thing he’s a genius and Magic’s got a soft spot for his team, cause there’d be a lot of bosses I’ve worked for who would have cut Ian for talking to his superior that way. It’s a delightful rant to hear when you’re not the one trying to get fired.

Magic has a conversation with Jenn about not ignoring her dad, reconciling with him. He also brings up forgiveness – once again showing the writers echoing the themes of the leap within the Project team storylines.

And Ben is Still Remembering

In the eleventh hour, the kids find the cabin – and it almost becomes their undoing. No Texas Chainsaw stuff here (which is what I was somewhat anticipating), the cabin’s real owners don’t show up – but the bad guys do. Leah sacrifices herself for the group, and Stacy concocts a plan to save them all and shut Sierra down for good.

Ben does a little of the bootstrapping that Sam used to pull on occasion – Addison is telling him how all their lives will turn out now, and Ben blurts out “friends forever.” At which point, they chose to make a pact and become a self-fulfilling prophecy.

And suddenly – in a moment of clarity spawned by the pact – Ben remembers it all. He remembers why he leaped – why he’s speeding up, why he’s trying to slingshot into the future – it’s for (spoiler alert). And then he leaps. To where, we don’t know.

This week is Quantum Leap’s fall finale. Yes, just eight episodes so far. But when they come back – presumably in February – there will be ten brand new episodes coming. And based on the trajectory of the season, they will continue to at least deliver, if not elevate the show’s quality so far.

But don’t worry! You won’t forget about our intrepid leaper. Ben, Addison, Magic, Ian, Jenn and the team will still be on – NBC announced that they will be re-running the first eight episodes on Monday and Saturday evenings during the hiatus.

Fans can rewatch and new viewers can catch up on what they might have missed. It feels a little like the old Quantum Leap weeks we used to have in the early 90s summers. For those newer viewers, yes, the first couple of episodes had some slight stumbles, especially for the super fans – but stick with it.

I complained early on, but I’ll be the first to say that every episode has built on the previous one, and even the hiccups pay off. I encourage anyone who was a fan of the original Quantum Leap, or any good sci-fi network television, to give it a go. You won’t regret it.

Now, if someone could just invent Quantum Leap technology, so we could all leap to February 2023 and see the next episode. Doesn’t matter when you get it done – it’s time travel – I’ll be here waiting.

All the current episodes of Quantum Leap – classic and new – are now streaming on Peacock.