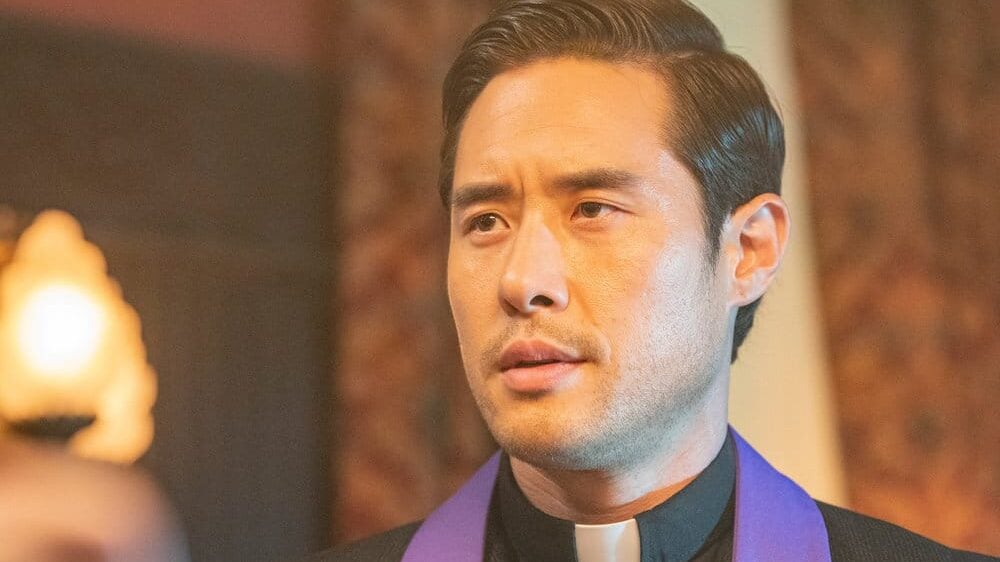 As I’ve probably mentioned several times in the past few reviews, the continuation of Quantum Leap continues to get better and better. That’s a good thing. The show is doing well in the ratings – one of the best new shows of the fall season, and the highest broadcast numbers (plus 5) of the network shows. That’s an accomplishment given the lack of sex, dragons, sultry doctors and demons. Until tonight.

No, that’s not a spoiler, that’s me funning with you – but here they come – within reason.

So we start off with Ben leaping back to 1934, somewhere on the East Coast, into the body of a priest, arriving at a home for an exorcism. As he walks in, Addison provides our first jump scare of the evening – popping out and shouting “Boo!” at Ben. Which freaks him out. She makes a joke about his ‘costume,' only to rescind it when the household greets him as Father Davenport.

Interestingly, the original character description for Dr. Ben Song, well, then Dr. Ben Prassad, was a man of faith and science. That’s apparently changed up a bit as Ben repeatedly tells, well, his reflection, he’s NOT a man of faith – not even a little. Unless you count the slight bit of superstition we all suffer from.

So the first conflict comes in Ben not believing in God or the church or exorcisms, in the body of a man who very much does. Although Addison does point out, “Ben, you are literally possessing that guy right now.”

He replies, as the balding white man in the mirror, “Okay. Fair point.”

Ben and Addison meet the family and then go to observe the ‘possessed' 18-year old girl, strapped to a bed with the phrase, “Open Mine Eyes to See” scrawled in blood, or maybe just red paint on the wall above her. They don’t spend a lot of time explaining the words, other than commenting that Daisy won’t let the maid clean them off. (Also, I'm not sure if it's a direct reference to the old hymn penned by blind lyricist Fanny Crosby in 1887, or just something the writers thought sounded cool.) Daisy comments that Ben is an angel sent to save her.

It all feels very Exorcist, if that movie happened during the Great Depression, and the writer and director lean into that, with some interesting deviations. For example, while Ben is not a fan of faith, the possessed girl Daisy, is very much a person who finds her anchor in faith. She compares herself, slightly, to Joan of Arc, commenting that her mom had taken her to see the Saint’s chapel in France.

I was half-expecting for the demon to recognize Ben, or to reject his exorcism practice, much in the same way the Sons of Sceva get attacked by demonic forces in Acts 19 for trying to invoke Jesus’ name without faith of their own. But it’s not that kind of story – and that’s okay too.

Addison helps Ben out, walking him through the three steps of an exorcism – force the demon to show itself (and usually get its hidden name), the exorcist and the demon do battle for the soul of the possessed, and then one of them leaves – the demon defeated, or the priest sent on to his heavenly reward. The mother comments that the local priest didn’t get past step one.

Addison jokes that Ben can use his high school Latin – I’m guessing as a man of science and someone who knows “several languages” he studied it more than that, but no problem. He stutters a little, then corrects himself and proceeds with the incantation, just as Addison’s neuristic hologram stutters. She says it’s just a glitch, then starts freaking out herself as Ben focuses on the book and can’t hear her.

As the demon starts to manifest, Addison completely fizzles out, the demon faces Ben and the girl cackles as Ben exclaims, “Oh hell no!”

One of the big urban legends around Quantum Leap is from the first show. In season 3, they did a Halloween episode where Sam leaps into a horror writer who is idolized by teenage Stevie King, and faces off against the Devil himself, appearing as Al.

When the episode originally aired, October 26, 1990, supposedly it coincided with the most power outages and VCR recording failures ever. Fans of the show often claim the episode is cursed and refuse to speak the title like it’s some Scottish play. The slight bit of superstition we all suffer from.

There are many clues seeded throughout the episode that if you watch carefully, reveal the truth – you never see the imaging door open when Al comes or goes. Hair and makeup styled the demon version of Al to have little curls at the edges of his hair, that appear horn-like, etc.

The beauty of “O Ye of Little Faith,” is that the writers had the idea to lean into those expectations. First Addison sparks, then goes silent and fizzles out. Back at the Project, they’re running into some serious glitching and servers offline. The episode is airing on Halloween, although they never mention the specific day in 2022, for some reason Ian is wearing cat ears.

“I have them in my desk in case of an e-meow-gency.” Okay… nevermind they’re a little, well, horn-like. And, of course, because Addison and Ziggy are cut off from Ben, we spend more time on the leap and how he deals with it solo than in previous episodes.

Magic is missing from this episode, but Addison looks to first Ian and then Jenn for assurance. Ian says they don’t know what’s going on exactly, and he doesn’t believe in the spiritual either, per se, but Sam Beckett absolutely did – he believed God was controlling the leaps. Which in a way, strangely echoes something Addison told Ben earlier – “I don’t know if the demon is real, but I do know the machine sent you here to fix a problem, so have faith in that.”

Back in 1934, Ben struggles with his unbelief and works with the doctor to try and find a rational, scientific explanation for what’s happening – even after the matriarch of the family ends up dead on top of an armoire while locked, alone in Daisy’s room.

Ben sees more evidence of the demonic with his own eyes and flees the room, locking himself in the water closet. He knows Daisy dies at 12:06, he knows – or thinks he does – that there’s no such thing as demons and supernatural evil, and he knows there’s no way Daisy could have thrown her Auntie onto the wardrobe by herself.

There’s a really cool moment where Ben is questioning himself. And since there’s no Addison to bounce ideas off of, he’s left with… his reflection in the mirror. John Grady, as the “real” priest doesn’t get to speak, but gets to do a bit more acting than the usual mirror-ed guest stars, as he provides counterpoint to Ben’s argument. For a fun bit of crossover trivia, he also plays Barry Goldman in the first episode of Netflix’s Dahmer, which happens to be titled, “The Bogeyman.”

Ben decides he’ll take on the essence of Father Davenport, much like he did the musculature of Danny Hill in the third episode or the, well, obesity of John Harvey in last week’s shaker. He pulls the purple alb over his head (the vestments representing healing and penance, both of which will come into play), and goes to give it the college try. After drinking the rest of the nasty gin Percival poured for him earlier.

The demon rises up, attacks Ben and he crashes to the floor and passes out.

He Awoke to Find Himself…

Sadly, no, Ben doesn’t go back to the future. But his subconscious, in the form of an Addison he can see and touch, guides him back to the rational path – illuminating not only the murder mystery he’s really solving – it’s Agatha Christie, not Stephen King this time – but also giving him breathing room to look at things critically – and see what he missed.

He wakes up and solves the mystery – putting together the pieces that were carefully planted by the writers since the first moment he stepped into the house. Conspiring with the maid and the doctor, Ben comes up with a plan to out the real killer of Auntie Tessa and early Munchausen by proxy afflicter (a nod to the Sixth Sense perhaps?).

Daisy is declared dead, the constable is brought in and then Ben does a fake reverse exorcism/séance parlor trick, insisting the Holy Spirit is bringing the girl to life so the real culprit can be revealed. Even though the villain knows the possession was poisoning, well, it’s that little bit of superstition we all suffer from – the person collapses, begging the Holy Spirit not to attack, and then…

It’s revealed not to be the work of one killer, but two – Ben has the bad guy on the ropes, confessing his crimes, that he did it for the inheritance. No! I did it for Lola. Percival is in love with his brother’s wife. And Lola is not so innocent. She wanted to take control of her life, go to Hollywood to pursue her acting dreams – and maybe ditch him in the process? That’s something that she felt was worth believing in.

As she rants, Percival, the true believer, begs Father Donavan for forgiveness. Ben replies that “He does not have that authority.” Daisy ‘breaks the spell,’ pulls the sheet off her face, and looks from her uncle to Lola, willing to kill her to pursue her dream… And replies, “I forgive you.”

Her mom can’t believe it. How could she forgive them, after everything she did? Daisy, the woman of faith replies, “It’s just what I believe in.”

The Constable has other plans, arresting Lola and Percival.

Back at the project, they’re cheering, because the Reddit of Daisy Gray’s possession and failed exorcism has disappeared – clearly Ben succeeded.

In 1934 we get a little kiss with history – I don’t know if there really was a sizeable donation to Goodwill in the 30s, but they did help the poor and destitute during the Great Depression. And that’s where Daisy is going to donate her Aunt’s inheritance.

Another nod to classic Quantum Leap fans, when Daisy first met Ben, she saw HIM, not Father Davenport, as she reveals, her angel was younger, had black hair and dark eyes. In the older show, animals and young children could see Sam as he was and not the face he was wearing.

And then… we get a glimpse of a demon – no, Janis Calavicci. She’s been trying to reach him – presumably, she’s the ghost in the machine that tore Ziggy and Addison away – she claims as much and that she’s there to warn him of – and he leaps.

More mysteries. Also, you’ll have to decide for yourself if the first time Ben apparently saw the demon manifesting – BEFORE he was drugged with gin and jimson weed – was Janis, or if, maybe there was something else going on, even just a little.

Next week, we’re off to Crystal Lake – er, Sierra Youth Academy. At least Ben gets to use his own name.

Elon Musk Plans To Build His Own Private Airport, Neighbors Not Happy