Alphabet Squadron: Victory’s Price picks up right where Shadow Fall left us. Delivering the final act of a trilogy is no easy feat, and yet Alexander Freed delivers an action-packed, edge-of-your-seat, and satisfying conclusion to the beloved Alphabet Squadron series.

Alphabet Squadron: Victory’s Price is an Emotionally Satisfying Conclusion to the Trilogy 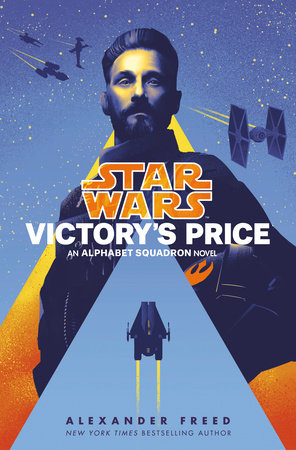 With Wyl Lark on the cover of Alphabet Squadron: Victory’s Price, it’s safe to assume that his story is at the center of the novel — and it is. He also has a few close calls that had me seriously concerned about what direction this book was heading in. His journey is an emotionally satisfying one and the trauma that all of the characters have endured is mentioned, though not delved into as fully as I may have wanted to see. But there is a great note about the fact that they haven’t had a therapist aboard since Adan.

As a fan of Star Wars: Rebels, I was thrilled with how much of a prominent role Hera Syndulla had in Alphabet Squadron: Victory’s Price. She was a driving force of motivation for the new characters that the series introduced us to and provided the perfect anchor for those who may need external character connections when delving into the literary universes of Star Wars.

And don’t worry, Yrica Quell’s story is far from over since we last met with her. Victory’s Price delves deep into her character, motives, and actions — exploring her character arc with all of the grace and respect that should be afforded to her character.

It would have been easy for Freed to choose a path where Mon Mothma decided to make an example out of Yrica Quell’s traitorous actions over the course of the Alphabet Squadron trilogy, but instead, he wrote a path that I hope more Star Wars creators are brave enough to tread in the future. Quell’s choices are not forgotten, her actions related to the destruction of Nacronis are not forgotten, but she is allowed to live with them. Despite it all, she even gets the girl in the end.

The “Victory’s Price” segment of the novel brings satisfying closure for not only the readers, but for the characters. Readers are not left to worry about the fates of the characters they’ve grown fond of, as Freed elaborates on the “after” that they share together and independently, while smartly leaving it with the potential to revisit this chapter of the Star Wars story in the future.

Alexander Freed’s strength lays in making nuanced characters that come alive on the pages of his novels. Each character in the Alphabet Squadron trilogy has had a distinct voice, a distinct personality, and a distinct way of resonating with all of us. Whether it’s stories about duty, acceptance, trust, or victory — Freed’s unique voice has created a Star Wars story that is worthy of sitting alongside the great sci-fi classics dwelling on anyone’s bookshelf.

Alphabet Squadron: Victory’s Price is a fitting end to a trilogy that reinvigorated the imaginations of so many Star Wars fans. From daunting tales of piloting feats, to the human stories that resonate through every Star Wars tale, and the connections that make all of us who we are, you won’t want to miss out on the end of this story.

Interview: David Hogan and Angela DiMarco Discuss the Making of ‘The Parish’