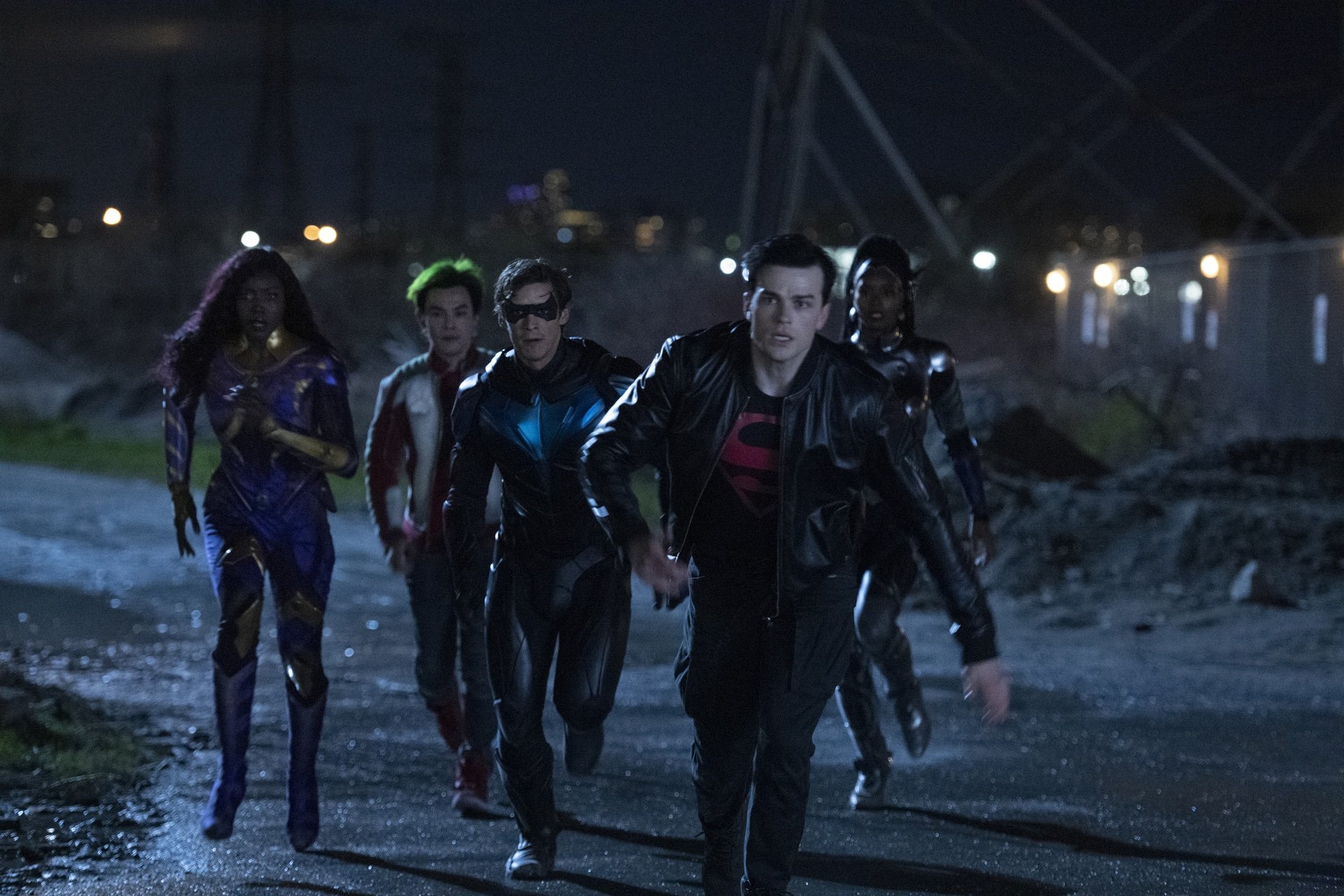 Titans Season 3 Episode 8 is one of the best yet — sitting only behind episode 5. There is a lot the unfolds in this one and while it doesn't have a lot of action, there is a ton of character and plot development which was needed to move the story forward. It is going to be really exciting to see where this goes.

This episode is titled “Home” for a reason, because Jason Todd is finally second-guessing working with Scarecrow and is ready to go home. He has a very bizarre encounter that allows him to realize that, and that he might be forgiven, but the point is he has gotten there.

When he beats up Scarecrow and gets clean from the fear drug, Jason finds himself at an adult entertainment building where guests pay to have… performers… act things out for them while they watch. Instead of going in that direction though, he asks them to play Hank and Dawn so that he can apologize. The woman opens up to Jason about bad things she has done while high, and says home is the best place to go afterwards. This encourages Jason to reach out to Dick in hopes of meeting and clearing the air.

This episode also brings Tim Drake, who fans saw briefly in the first and seventh episodes, back into the mix. This time he full-on approaches Dick about wanting to be Robin — and he is going to stop at nothing to accomplish that dream. He shows up at Wayne Manor and claims to have figured out that Dick is Nightwing and that Bruce Wayne is Batman. He was able to put it all together because the Graysons are the only ones who know a certain movie, that Robin and Nightwing have used in the past. It is very clear he is great at studying moves, and has learned a lot from his detective father.

Tim also mentions to Dick that he had thought Jason Todd was the Robin that was killed by Joker, however, he saw him the night his father got shot so he must have been wrong. That is all it takes for Dick to call Barbara and have Jason tracked. As Dick tries to stop Jason his motorcycle is hit by a car and he is hurt badly. Jason stands over him and could have killed him but instead calls 911 to save him.

After being ditched by Jason, who he oddly considers a friend of his, Scarecrow goes completely off the deep end. He visits his mother, who is of course a psychiatrist, and it becomes painfully obvious that she is part of the reason he is the way he is. She treats him very poorly, even triggering a silent alarm to have him captured. He pays her back by snapping her neck and killing her.

Those that ship Blackfire and Conner will be especially excited as they get together in this episode. When Starfire finds out they are sleeping together they briefly discuss calling it off, however, neither of them wants that.

Speaking of Starfire, she is yet again having those visions and trances, but doesn’t know why. She drove out to a random street in Gotham that didn’t seem to mean anything to her. She also pictured herself as a baby in her vision, but again, there is no clarification of these yet.

When Dick and Jason meet, Jason opens up to him about how he is clean now and feels like it was not him who killed Hank. He wants to come home to his friends, and is offering up Scarecrow in good faith. He tells Dick where to meet him — at an old fill station — so that he can give him up.

Meanwhile, Scarecrow has a plan to poison the water of Gotham with his fear drug. All he needs to do is a find a way to tap into the water supply from the old fill station. A city inspector comes inadvertently helps him figure out just how to do that when he gives an idea of what could break through the solid steel — the power of the sun, and we all know someone with that now don’t we.

Things don’t go so well at the station. Not only has Tim gotten himself shot by Scarecrow because he was following Jason to prove he can be Robin, btu Starfire accidentally doses all of Gotham with the fear drug. That’s right, Scarecrow lures her blasts into exactly the right spot so that his chemicals will enter into Gotham’s water supply.

As if that isn’t bad enough, a pipe in Barbara’s office has burst just at the worst timing – and it sure looks like she will be getting hit with a big dose of the chemical herself.

Although the scene in that adult theater feels completely out of place, and quite honestly, a bit dirty, Curran Walters shows off his skills in this episode yet again. It is impossible not to feel for him as Jason. He has been a major standout this entire season as he plays several different characters — Red Hood, Jason Todd, and something in between.

Curran isn't the only one who shines in this episode. Vincent Kartheiser who plays Scarecrow is able to tap into something emotional and raw in the scene where he is facing his mother. The character and plot development are getting better and better, leaving fans very excited for what might happen next.

Titans Brings Tim Drake Back Into The Mix

What Happens if You Lose a Chargeback?