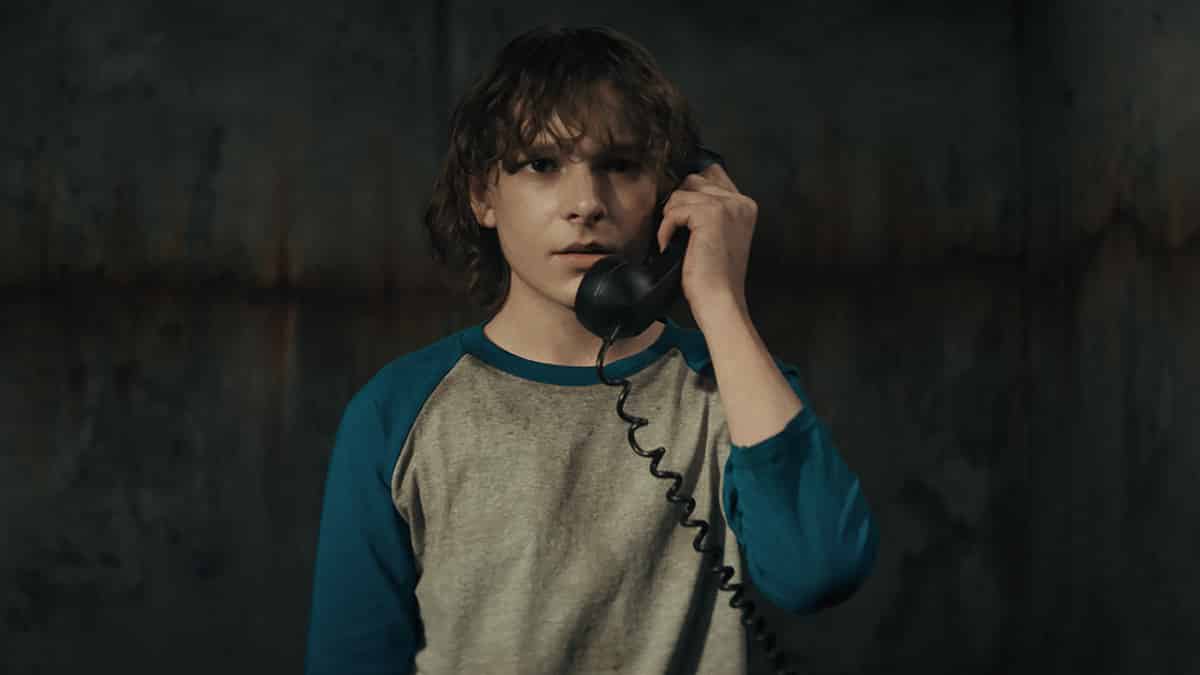 Scott Derrickson is back, and he’s up to his old tricks (in the best way) in The Black Phone. And this time, there’s no true story to adhere to, no cinematic universe to please. Much like his 2012 horror film Sinister, there’s just a story that’s scary as hell.

But just because Derrickson (and co-writer C. Robert Cargill) is using a somewhat familiar script doesn’t mean he isn’t toying with it. Fans familiar with his work will recognize returning favorites from his aforementioned signature film, which also featured James Ransone and Ethan Hawke as men on the right side of the fight against an evil invading force.

Ransone may be back in the same laughably familiar groove as a well-meaning idiot whose drug habit makes him slightly more addled than usual, but Hawke could have something of a revival on the horizon, one entirely devoted to outright villainy.

Why not, since in a long career defined by one iconic turn after another, his role as the sadistic child killer The Grabber is his most terrifying yet? Even the most skilled actors tend to go for laughs when they go all dark, seemingly unable to stop themselves from winking at their fan base and daring us to hate them. Not so with Hawke, who is all menace. Much like the iconic antihero Rorschach, his mask doesn’t so much play into his performance as extend it, acting as the true face of the monster he’s become.

A Hill To Die On

Yet for all that, The Black Phone isn’t his story. That belongs to Derrickson’s surrogate Finney (Mason Thames), a 13-year-old boy who’s just trying to make it through his hardscrabble childhood in 1978 Denver, the city of Derrickson’s birth.

Derrickson would have also been about Finney’s age at the time, which makes the movie’s surprisingly complex mixture of nostalgia and malevolent undercurrents ring more true than similar throwbacks often do. As Derrickson is quick to remind, childhood in the ‘70s involved blood and sweat even at the best of times, and films such as The Texas Chainsaw Massacre hardly allowed the final girl to survive unscathed.

In Finney’s world, violence is an everyday force, and surviving it often involves small and large humiliations, whether it’s the bullies who beat him bloody, or the abusive alcoholic father (Jeremy Davies) who can proclaim his love one day and belt a sibling to tears and screams on another. So by the time The Grabber shows up and abducts Finney to a soundproof basement, the logic of this kind of childhood means a serial killer’s previous young victims calling on a supposedly defunct phone doesn’t seem like that much of a stretch. Or for that matter, his sister Gwen’s (Madeleine McGraw) eerie, precognitive dreams that she seems to have inherited from her deceased mother.

None of it would work actually, not without Derrickson’s awareness of just how much of a child’s life is out of their control, subject to rules that seem bafflingly harsh on the best of days. Like childhood itself, each element of the film has its own logic, from the creepy ghosts who each have their own distinct personalities that not even death has completely deprived them of, to Hawke’s terrifyingly brutal games that Finney is well aware he may not survive.

It’s admittedly easy to point out the holes in the various procedures of The Black Phone, from Finney’s many undetected attempts to escape and failure to follow up on the most promising, as well as the decision of the police to take Gwen’s dreams seriously, even if she has to hilariously tear into their attempts to somehow blame her for the abductions first.

The most unrealistic of all might be that this experience could be one a kid can not only triumph over, but emerge stronger from, with a better life and more empowered mindset. But in a time when violence of a much more unmanageable type snarls against us all from our highest offices, maybe even a serial killer with a body count like The Grabber’s doesn’t seem so insurmountable.

These Are the Most Popular Game Consoles in Every State