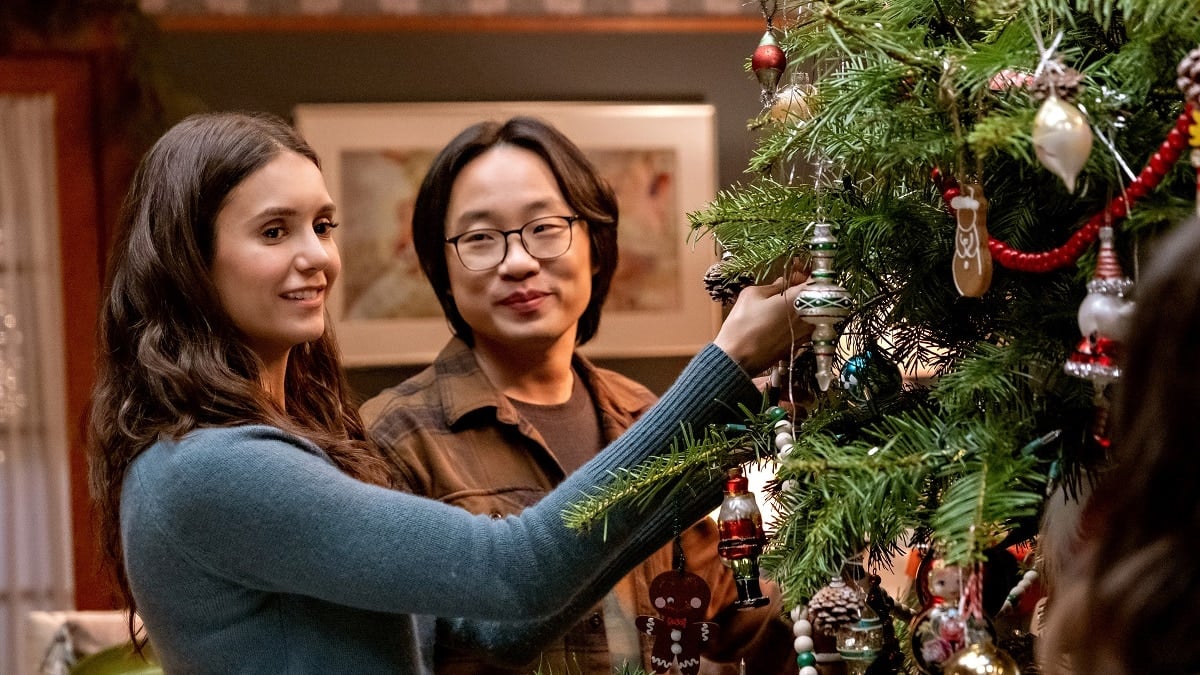 It’s all well and good to mock the absolute torrent of new (usually romance/rom-com) Christmas movies viewers are inundated every year around this time. They are profligate and often of dubious quality. When one hits, though? Oh, that vibe is delicious.

Does Love Hard, Netflix’s first holiday offering off the blocks, hit that perfect vibration? It does not. Is it still a sweet, warm bit of comfort film? That it is.

To get to those cozy feels, though, one has to push through one of the more, well, dangerous premises in seasonal romcoms. Hard is a movie not without, shall we say, problematic elements.

Natalie Bauer (Nina Dobrev) makes her living going on bad dates. She’s like a miserable version of Carrie Bradshaw, all relationship downers, no orgasmic highs. How a column could exist for months, never mind years, is the sort of mystery Love Hard has no interest in exploring. And, honestly, that’s fine. This is the kind of suspended disbelief that costs one nothing.

Despite a consistent wage, Natalie has grown weary of acting as the rodeo clown of the dating world. Her friend and co-worker Kerry (Heather McMahan) convinces Natalie to expand her dating apps’ radius. When she does, and it connects her to Josh, Natalie dares to dream. Several texts, many photos, and a few phone calls later, the two are pulling the “let’s fall asleep together without falling asleep.

Under Kerry’s further encouragement, Natalie pitches her boss Lee (Matty Finochio) on the idea of a good relationship story, one that culminates with her flying cross country to surprise her long-distance date and during Christmas no less. If this feels like the makings of a real-world disaster, you are correct. Please don’t do this, people—so much potential to either be monstrously invasive or seriously dangerous.

But the suspension of disbelief!

Anyway, the boss man bites. So, Natalie is up and off, flying those friendly skies from LA to frigid upstate New York. Unfortunately, reality crashes in almost immediately. Josh (Jimmy O. Yang) isn’t the man in the photos. That’s an old childhood friend, Tag (Darren Barnet). Josh was a catfisher, albeit one who seems to have told the truth about everything but how he looks.

Stuck a continent away from her home, Natalie readily agrees to Josh’s bizarre plan. Stay the next several days. Pretend to be his girlfriend. Sleep in his basement room?! In return, he’ll help her get with the photogenic Tag.

Again, don’t do this. Don’t sleep in the bed of a man who tricked who into thinking he was someone else in return for him Cyrano-ing you together with the guy who looks like everything you want but has none of the personality qualities you desire.

If you can make it through all those deeply bad choices and shallow decisions, the movie has a treat for you. Yang and Dobrev actually have great chemistry. It never feels romantic, but they make for good scene partners. Despite the mountain of garbage that led to them being together in Lake Placid days before Christmas, they have a quick and easy (friendly) affection for each other. Natalie won’t stop needling him for the catfishing—nor should she—but there’s a warmth beneath her righteous annoyance. In return, Yang seems to be genuine in his desire to help her, even as his feelings continue to develop.

Some of the things Hard tries in the back half it simply can’t land. Right or wrong, there’s no way to sell that lying about, say, an interest in the outdoors is roughly equivalent to pretending you have a whole different physical form. Maybe that says something about our culture being too shallow and looks-oriented. Regardless, that dog absolutely will not hunt. Not even with how much earnest vulnerability Yang puts on the lines.

Others are more of a mixed bag. That this is yet another rom-com with a wacky old lady—Josh’s granny June (Althea Kaye)—plays every bit as groanworthy as you’d expect. On the other hand, the dynamics between Josh and his dad (the reliably great James Saito) have a wonderful lived-in feeling, especially when they two share a memory of Josh’s grandfather—his dad’s dad—that has the gentle ache of largely healed grief.

The film ends up pretty much exactly where you’d expect, including extensive embarrassing public reveals and saccharine reunions. But, despite where the movie takes us, Dobrev and Yang never find that romantic spark. And yes, it invokes both Die Hard and Love, Actually, two Christmas movies everyone can go ahead and shut the hell up about immediately.

(If you’re just putting together this movie’s title is a portmanteau of those movie titles, don’t worry. I am too.)

Nonetheless, Love Hard delivers on a generosity of spirit. It does the most critical thing good holiday movies of any kind do. It highlights how alone you can feel during the one time of the year all we hear about is family, friends, and closeness. Then slowly but surely, and often improbably, proceeds to guide the characters to a place of belonging, a holiday full of support. It’s not a new classic, and, oh boy, that high concept. Yet, the smile that will linger on your lips ain’t nothing.

And honestly, though I’m loathed to admit, they do find a way to wring one more laugh out of the Die Hard is Christmas movie…thing. That, friends and foes, is a true seasonal miracle.

Its high concept hook is a lot, but if you can handle that, Love Hard offers a sweet holiday tale.

Jason Reitman Movies Ranked and Where to Stream Them