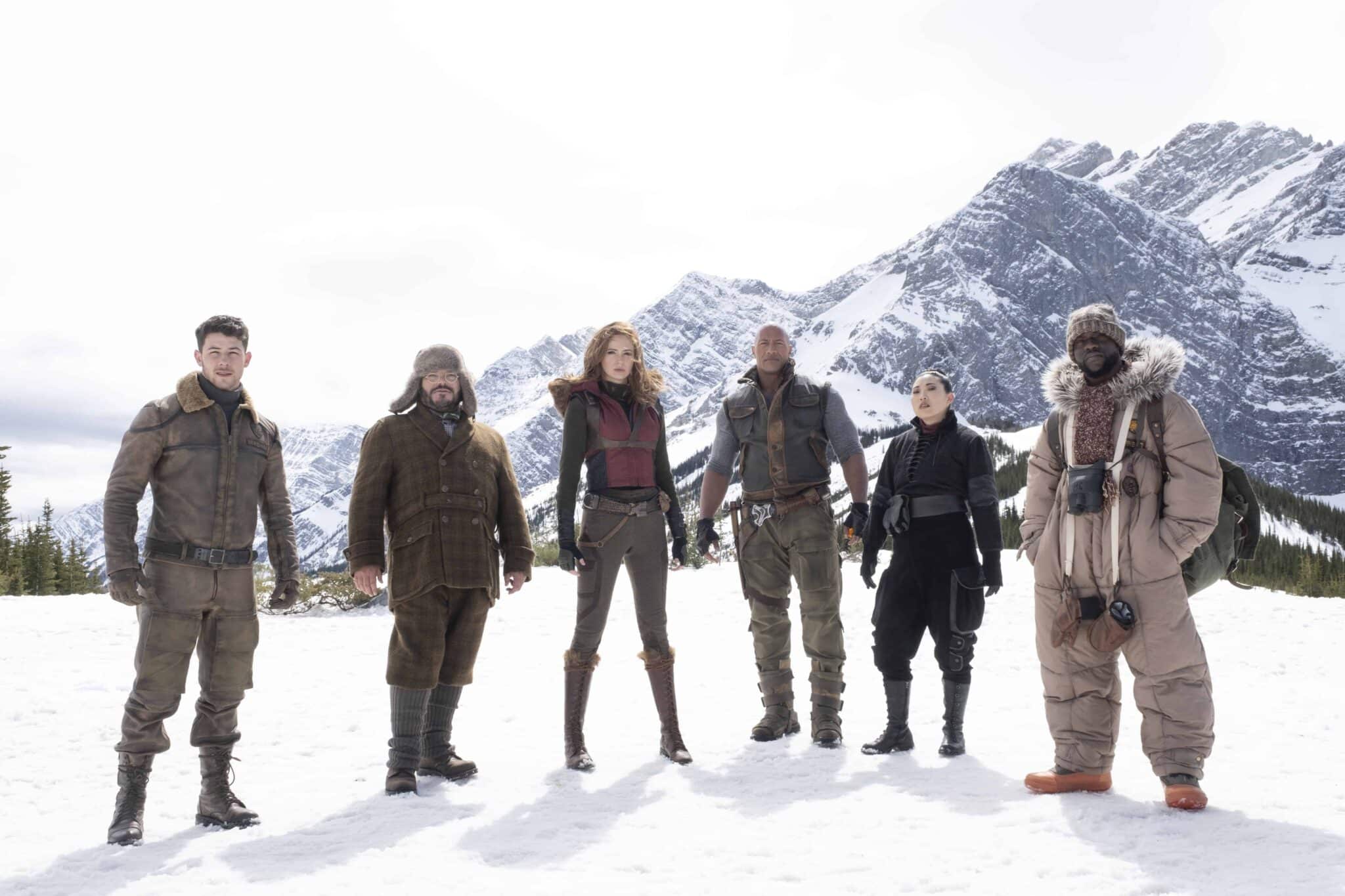 ***WARNING! The following contains plot spoilers for Jumanji: The Next Level!***

To quote Freddie Mercury, “Everybody play the game!”

Fans of 1995’s Jumanji were a bit hesitant (and rightly so) when Sony decided to continue the franchise in 2017 with the release of Welcome to the Jungle. Luckily, that ambivalence was misplaced, as the sequel/soft reboot cleverly found a way to make the IP relevant for 21st Century audiences. Instead of a supernatural board game, Jumanji became a supernatural video game.

Simple on the surface, but genius in its execution.

Working from a script written by no less than four writers, director Jake Kasdan made sure that every virtual opportunity was seen to its fullest potential. The result was a project that both parodied and paid loving tribute to the iconic video game tropes we all take for granted.

In a way, the film neared Deadpool levels of meta in the best way possible.

Turning the original premise on its head, Welcome to the Jungle gave us a peek inside the world of the game, rather than the world of the game bleeding into our reality. A surprisingly great follow-up more than 20 years in the making, the movie exceeded all expectations and raked in nearly $1 billion at the worldwide box office.

All that green meant another entry in the series was greenlit almost immediately. Enter Jumanji: The Next Level, an enjoyable sequel that does what all sequels are expected to do: ramp up the action and world-building. And while The Next Level can feel like a rehash of its predecessor, it’s still able to skate by on genuine laughs and a seemingly endless supply of charm.

Kasdan is back in the director’s chair, but now he’s got a screenplay credit with two of the last movie’s scribes: Jeff Pinker and Scott Rosenberg. Taking place about a year after the events of Welcome to the Jungle, The Next Level starts off pretty slow as the characters from the last movie reunite over winter break, returning from college and volunteer work abroad.

Bonded for life thanks to their last foray into the mystical game, Fridge (Ser' Darius Blain), Martha (Morgan Turner), and Bethany (Madison Iseman) begin to worry about the absence of Spencer (Alex Wolff), who isn't answering his phone and doesn't show up for brunch.

As it turns out, Spencer kept the Jumanji video game console, fixed it, and willingly got himself sucked back into the virtual world, so as to gain more self-confidence as his avatar from the last movie, Dr. Smolder Bravestone (Dwayne “The Rock” Johnson). At least that's what I think he does; the script doesn't really make it entirely clear why he wants to go return to such a dangerous universe.

Aside from Spencer, there are no real arcs for his friends, who resolved their personality problems in the last installments. Anyway, let's get back to what the story is about.

Upon discovering where Spencer has gone, Fridge, Martha, and Bethany reluctantly decide to venture back into the game to save their friend. Only this time they’re not alone, because the console has also sucked in two old dudes: Spencer’s Grandpa Eddie (Danny DeVito) and Eddie's estranged business partner, Milo (Danny Glover).

With the console all glitchy, only Martha gets her old avatar, Ruby Roundhouse (Karen Gillan). Fridge finds himself in the body of Shelly Oberon (Jack Black), which lends itself to some pretty great humor as Fridge, so used to working out on a daily basis, laments about how his portly character has lame abilities and weaknesses.

The biggest twist, though, is that Eddie becomes Bravestone and Milo inhabits Mouse Finbar (Kevin Hart). I have to give major props to both Johnson and Hart who spend a good chunk of the movie imitating DeVito and Glover, who can’t seem to grasp that they've just entered a magical video game.

It’s the ol' “old-person-acts-senile-and-confused-in-a-dangerous-situation” cliche, but it does become more than that when Eddie and Milo relish in recapturing their youthful stamina. In particular, Hart does a standout job emulating Glover’s trademark slow and low-pitched delivery—so award-worthy in our world, but a fatal flaw in the dangerous world of the game.

Just as the teens in the first movie had to overcome their differences to survive, Eddie and Milo must bury the hatchet about a restaurant they owned together in order to grow as characters. In other words, the power-ups were the lessons they learned along the way.

As such, the film really belongs to these two golden year pals, who have the most to learn about themselves and the dangers of leaving issues unresolved until it's almost too late to do anything about them.

Once we get back into Jumanji, the story kicks into high gear as our favorite NPC, Nigel Billingsley (Rhys Darby), lays out a brand-new storyline that throws our heroes for a loop. This time around, they’re expected to recover a mystical Temple of Doom-Esque jewel from Jurgen the Brutal (Game of Thrones’ Rory McCann, aka the Hound), a Viking-inspired baddie that works a lot better than Bobby Cannavale’s Russell Van Pelt did in Welcome to the Jungle.

For one thing, Jurgen starts off with a much better backstory: he murdered Dr. Bravestone’s parents. In a hilariously inspired move, Johnson also plays Bravestone Sr. (mustachioed and rocking a groovy ‘70s perm) in a quick flashback during the introductory cut scene. With that said, Bravestone’s tragic origins are never come full circle when Jurgen is eventually defeated in the final act.

Favoring barren deserts and snowy mountains over jungles this time around, The Next Level’s version of Jumanji feels like a Dark Tower pocket universe of different influences that anachronistically (and delightfully) conflict with one another.

It’s what makes this ever-changing universe so much fun to visit and the gorgeous cinematography of the returning DP, Gyula Pados, captures all the break-taking and adventurous beauty of the natural world.

Even with a microwaved leftover quality to the proceedings, The Next Level is still a treat to behold, especially with the addition of new characters like pickpocket Ming Fleetfoot (Awkwafina turns in a beautifully adaptable performance) and Cyclone, a majestic horse with hidden—yet awesome—abilities.

Add in mysterious pools that allow the characters to swap avatar bodies, and you’ve got enough fresh elements to justify this sequel, which is still enjoyable, despite a handful of missed opportunities (the importance of a fruit-based mission is totally squandered in Act III) and contrived plot elements. Did we really need Jefferson “Seaplane” McDonough (Nick Jonas) to come back after Alex’s story wrapped up nicely in the last film?

Whether it’s a sandy buggy escape from rabid ostriches, a race across rickety rope bridges with snarling mandrills in hot pursuit, or a casual chat with a stable full of camels, Jumanji: The Next Level has no shortage of epic set pieces and standout character moments.

There’s even a testicle joke that may just be one of the funniest gags of 2019.

By the end, you won’t be able to keep yourself from smiling, even as the characters resume their lives in the “normal” world. A mid-credits scene does leave the door open for a sequel that, if followed through on, would adhere closer to the events of the 1995 movie, but we’ll have to wait and see how The Next Level performs at the box office.

Personally, I think it would be cool to see Nigel Billingsley turned into the main villain for a future film since he’s spent two entries as a genial and (sometimes) helpful NPC. Hell, Jonathan Hyde, 71, is still alive. Why not have him reprise his role as Van Pelt, now an aged man who decides to pass on the game-hunting torch to a younger character like Nigel?

And that’s just the thing. I wouldn’t mind returning to this world again. Despite my disappointment with certain elements in The Next Level, I cannot deny the vast potential the world of Jumanji holds for Sony, which was very wise to revive this classic property from the mid-90s.

The characters are memorable, the jokes are solid, and the premise is pretty much second to none. A game—be it board, video, or something else entirely—that comes to life is something that, if handled correctly, will never lose its magic.

Playing games in a universal constant that applies to every person on the planet. That’s why it’s so thrilling to see the stakes become real when we’re so used to rolling dice or pushing a few buttons in the comfort of our own homes.

What would happen if you were really sent to jail in Monopoly? How about if you suffered serious third-degree burns from Bowser’s fire breath in the Super Mario?

That is what makes Jumanji’s concept so appealing. It takes something so mundane and unexpectedly turns it into an epic struggle between life and death. A person so used to going through the motions must cautiously consider everything they do in order to keep breathing.

To quote Freddie once more, “It's so easy when you know the rules.”

Jumanji: The Next Level opens in theaters everywhere this Friday, Dec. 13.

How Are Acolytes of the Beyond Connected to Palpatine?