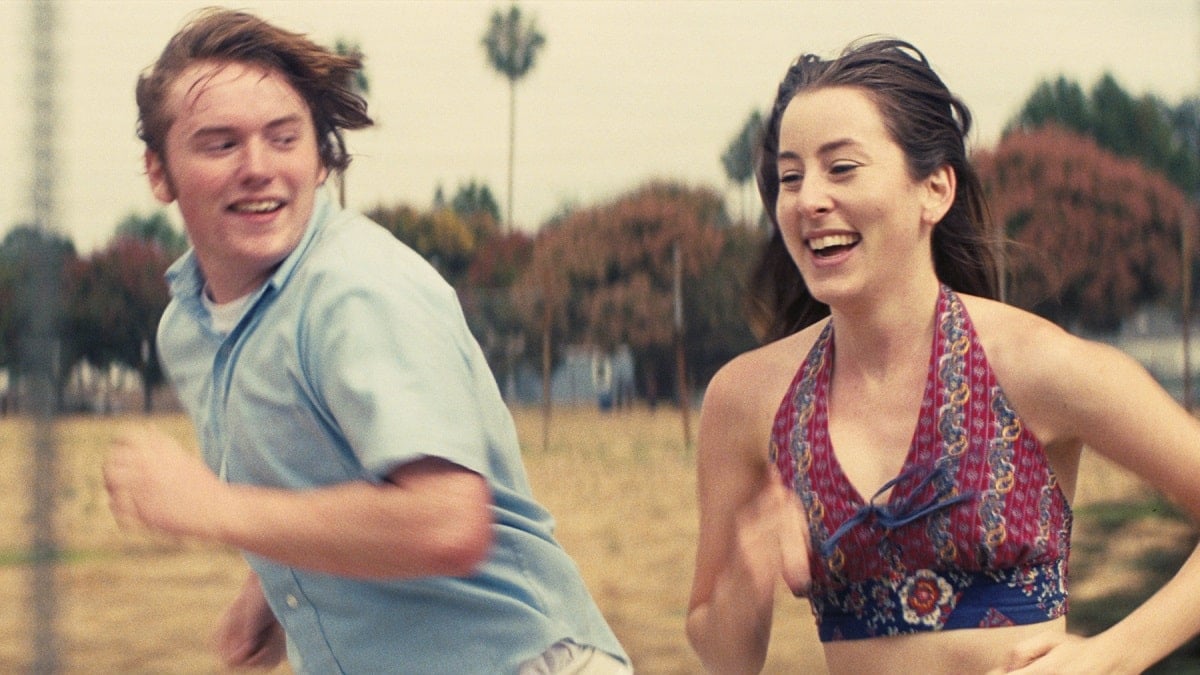 Like many leads in Paul Thomas Anderson films, Alana (Alana Haim) is adrift. It’s 1973, she’s 25, and she can’t figure what she wants or where her place is in the world.

By contrast, Gary (Cooper Hoffman) seems uniquely made for the moment. At 15, he seems fearless. He recklessly throws around his charisma. He comes across not so much as a kid playing an adult but a kid who’s never been told that some things come with age. Gary wasn’t forced to grow up too soon; he just really likes being a kid everyone treats like an adult.

When they first meet, him on his way to school photos, her working as the handsy photographer’s (Patrick Hoelck) helper, it is no wonder he seems so entirely in control of the conversation. She’s miserable, adrift, and perhaps a bit delighted to have someone so unabashedly pursue her. On the other hand, he’s confident, fully in his element, and willing to take a flyer on being a flirt because that’s Gary’s way. He takes almost nothing seriously, so he’ll try anything.

This opening is shot through with that kind of giddy “too much energy” excitement. The patter between Hoffman and Haim comes so fast and flippant it feels screwball. It nails the sense of two people meeting for the first time and just spiking each other’s enthusiasm and anxiety. While Hoffman grew up film adjacent—his father is Philip Seymour Hoffman—and Haim has experience performing in front of the camera in her band’s music videos, this is the first moments of their first-ever featured film. It’s an impressive way to show up for sure.

As their relationship grows, stops, stutters, and flourishes in moments, the duo’s performances grow more impressive. While a screwball comedy set in the 1970s and populated chiefly by people late in adolescence or early in adulthood has its delights, that’s not what Anderson is here to do. Instead, he prefers to take the film in a more detailed and complex exploration of two people getting to know one another and falling into a version of love with each other.

For some, that last bit might bring them up short. Ten years separate 25 and 15 are separated by, and people tend to change pretty significantly over that decade of aging. There’s nothing wrong with skipping this one if that’s too much for a viewer to get past. However, there’s nothing to suggest that the film is endorsing this for them or for people in general. Instead, it seems to underline the exact difficulty of Alana’s situation.

Time after time, Licorice Pizza sends Alana into encounters with men that inevitably leave her upset, disappointed, and angry. First, it’s her photographer boss slapping her ass in a high school gym in front of a line of students. Then it is Jon Peters (rendered as an id monster hilariously by Bradley Cooper). Or aging actor Jack Holden (Sean Penn), a man so convinced of his greatness, he speaks almost entirely in lines from his past films. And so, it goes with a racist restauranteur (John Michael Higgins), an invasive reporter (Craig Stark), a forgetful politician (Joel Wachs), and more. Every man she meets is an arrested development case who engages in the world with either active or casual cruelty, cluelessness, and cowardice.

Gary doesn’t so much stand out from as seem like a different varietal of the same old, same old. The only difference is there’s still a chance he might grow out of it someday. There’s still something to hope for in him.

What’s interesting from a filmmaking standpoint is how warm a film Anderson, aided by DP Michael Bauman, has made here. Despite the cynical lens on men of the early ‘70s—and likely a take on the men of today, too—Pizza might be his kindest, most welcoming movie to date. His films tend to offer a kind of bruised empathy for its subjects—especially Punch Drunk Love and Magnolia—but they’ve usually given that support from a distance. Here, for the first time, there’s a sense of an embrace. Anderson seems to be giving his mixed-up, reckless protagonists—and the audience along with them—a hopeful hug.

Pizza is also a bit infected with Gary’s huckster energy. Like him, the movie bounces and careens as it goes. It is as frequently episodic as Gary’s ever-changing business ventures. As a result, there isn’t so much a plot to the whole endeavor as a vibe. For anyone looking for a more evident through-line than just “growing up,” this one will likely frustrate.

Finally, despite the film’s kindness to its characters, Anderson includes a sense of darkness without lingering on it. We see someone smash in a man’s windshield with a tire iron and never suffer consequences; another man breaks a storefront window with a garbage can and similarly receives no sanction. There’s the ’73 gas shortage creating brief issues for our protagonists. Homophobia and racism make themselves known. We even get a setpiece where a character faces a murder accusation. They’re all brief intrusions, but they serve as a hint of a meaner, darker reality.

Beyond the hustler optimism of Gary and his world, bad things are happening. They keep breaking through the delightful chaos. And while he’s always able to throw back up the walls around his rose-colored life, it’s clear that won’t be forever. Like the intense, quick ride of growing up, this is a film about a wild, fun, irresponsible moment where everything and nothing matters. Then, on its way out it quietly whispers, “yes, but what’s next?”

Licorice Pizza might be Paul Thomas Anderson's kindest, most welcoming movie to date even as it gives us glimpses of the darkness at the corners.