A horror adventure with consequences based on your actions and decisions masterfully blends modern-day with the Salem Witch trials in an interesting, fast-paced thriller that ends with a very satisfying twist. 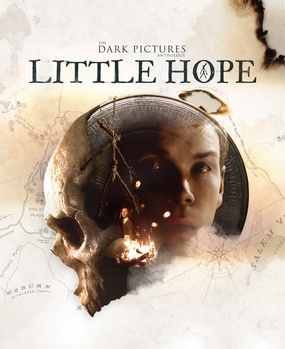 The Dark Pictures Anthology: Little Hope Lives Up to the Horrifying Hype

Supermassive Games is responsible for one of my favorite horror adventure games, Until Dawn. A violent, entertaining romp about teens coming back to a snowy lodge a year after their friends went missing was a breakthrough in the ‘choose your own adventure’ type games that offered multiple endings depending on how many people you managed to save.  I ate it up.

When they announced a new anthology, I was very excited.  The first game released, The Man of Medan, was good.  But I didn’t feel like it lived up to its predecessor.  When Little Hope was announced, I was cautiously optimistic.  It turns out that optimism paid off.

Little Hope opens with a bus crash on a small town road.  It sets up the mystery nicely.  The game then segues into a cozy, snowy home in the 1970s that quickly turns into a tragedy involving a house fire and a very creepy little girl.

It’s mostly told from Anthony’s POV.  He becomes the pivot point for most of the game.  It then cuts back to the current day bus crash.  The people on the bus are confused, and the bus driver is missing.  They decide to walk into the town of Little Hope to find help.

It’s quickly revealed that the town is full of secrets and ghosts, and the characters have been here before. Oh- and Anthony is now Andrew in the current day, and it becomes apparent that all the characters are the same ones from the 1970s.  How is this possible?

As with the previous games, you control all the characters at some point.  Your decisions affect how others react to you, building relationships, or weakening them.  And further, in the game, your life will depend on your quick reflexes and decision making.

At certain points, you will return to The Curator, the smug narrator of the game who will offer hints.  I was glad to see the return to this mechanic.  The therapist in Until Dawn, voiced by the fantastic Peter Stormare, was an integral part of the story.

The characters are complex and unique.  And with 5 of them spanning multiple eras, it was nice to have them each standout—some more than others.  I found myself gravitating to Taylor, voiced by Caitlyn Sponheimer. She was plucky and honest and had a real, grounded feeling to her.  The most famous actor is Will Poulter.

He voices Anthony/Andrew with realism and a sort of earnestness.  The motion capture depicted his features well, and I instantly knew who the actor was.  Another shoutout goes to Angela, a spitfire of a middle-aged woman voiced by Ellen David.

It was fantastic to see that age demographic represented in such a kick-ass manner. She was a hoot!

As far as the horror elements, there are many jump scares.  Ghosts come out of nowhere to grab your hand and pull you into a flashback from the 1600s, trying to solve a mystery involving that ominous little girl.

You’ll experience the same characters as residents of Little Hope embroiled in their own witch trials.  It’s effectively creepy and a reminder of our dark and horrific past. I screamed on many occasions.

There are well-developed baddies in the current day too.  An especially freaky monster that inhumanely crawls and tries to stab you with a fence post was a standout.

As with the other games, your goal is to keep everyone alive.  While I failed to do that on Until Dawn's multiple play-throughs, my first go at Little Hope was successful.  Not one person died!  This game was not as hard as the previous two.

It felt like less time was spent frantically trying to hit the right button, and more was spent watching an engrossing and, at times, terrifying story play out.  Without spoiling the end, I will say that it was very satisfying and a twist I did not see coming.

My only complaint, and it’s small, is the walking was a little slow.  I understand that it helps build the atmosphere, and you definitely don’t want to rush through; otherwise, you’d miss things.  But there were times I wish I had the option to jam the trigger down to bring it to a jog in areas I had already explored.

Overall this game is a stellar addition to the horror adventure genre.  Because I could complete the game with the best possible outcome, I likely won’t return to it anytime soon.  But some of the images will stick with me for a long time.

*Watch the first 30 minutes of my gameplay here.

I give this game an enthusiastic 4 out of 5 tacos!

Lisa Coronado is an actress, writer, and gamer. You can find her on Z Nation and Twin Peaks. She also streams on twitch as ItsASmallsWorld.

When not working she enjoys reading, tacos, and a good ol’ Irish whiskey.

A Guide To Wedding Planning on a Budget

Interview: Joey Graceffa Talks About Who’s Sus in Among Us and the Escape the Night Board Game