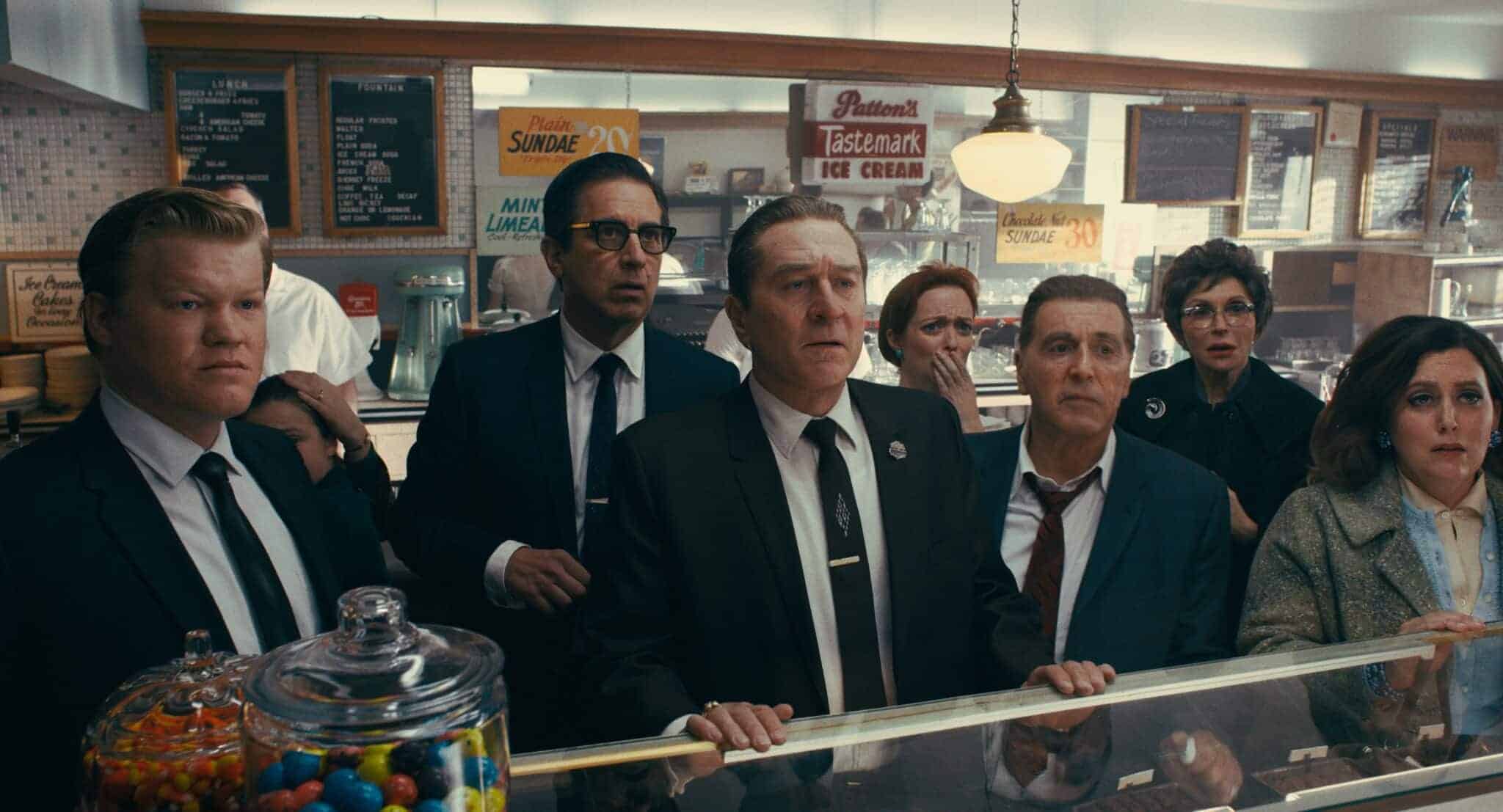 ***WARNING! The following contains certain spoilers for The Irishman!***

American history is fit to burst with unanswered questions: Who was the Zodiac Killer? Was there another gunman on the grassy knoll? And just what in the hell happened to Jimmy Hoffa? For the purpose of this review, I’ll be focusing on the last query because Martin Scorsese actually answers it with his latest cinematic effort, The Irishman.

Everyone knows that Hoffa disappeared, but most of us, myself included, didn't know why.

Clocking in at whopping three-and-a-half hours and containing enough material for a three-night television event, the film finds the director at the top of his game with an epic crime tale that spans several decades and doubles as a personal reflective looking glass for the septuagenarian filmmaker. It’s a balls-to-the-wall achievement that cares nothing for the size of your puny bladder.

Seriously, Though, Don’t Take a Sip of That Large Coke Zero Until an Hour-and-A-half in at Least. The Good News Is That Thanks To Constant Frenetic Energy, the Film Doesn’t Really Feel Like Three-and-A-half Hours.

Feeling like the very pinnacle of Scorsese's career, this movie cannibalizes the best elements of Goodfellas and Casino to say something new about gangster cinema. Moreover, it serves as definitive proof that the Oscar-winning director is a premier scholar on the genre, acutely aware that the shiny and enticing veneer of crime always comes with a terrible price tag.

That a lifetime of sins can and will catch up to you sooner or later.

As if to remind us this is indeed a Scorsese joint, The Irishman immediately drops the needle on “In the Still of the Night” by the Five Satins. The classic doo-wop tune carries us through a lengthy tracking shot that creeps through the halls of a sleepy retirement home, the music serving as a haunting reminder of a more illustrious and youthful time for the home’s occupants.

The shot delivers us to Frank “The Irishman” Sheeran (Robert De Niro in his eighth collaboration with Scorsese), once an untouchable mob hitman, now a graying and wrinkled husk of a man in a wheelchair. Frank kicks things off in earnest with a monologue to the camera and voiceover narration—tropes that can certainly be classified as one of Scorsese’s many storytelling trademarks.

Screenwriting 101 will tell you that narration is a cheap way of providing exposition and should be avoided at all costs. The mobster movie is a notable exception to the rule because: 1) it offers a window into the mind of a person doing heinous things and 2) it helps the audience keep track of what’s going on, especially if the plot contains dozens of different characters and several time periods.

To help us along even further, Scorsese employs the use of short, meta, and objectively hilarious title cards that plainly state the fates of minor characters: “So and so, shot in the head this many times, in this year in this location.” The acerbic dark humor that only Scorsese can do properly is derived not from the prospect of violence, but from the ironic revelation that the exorbitant and carefree lifestyles of these law-breaking individuals cannot last. In addition, they help fill in gaps where Frank, somewhat of an unreliable narrator, leaves out information.

Anyway, back to the main story. And don’t worry, I haven’t forgotten about Hoffa (played by Al Pacino in his first film with Scorsese), but he doesn’t show up until an hour into the movie, which takes its time to breathe and introduce Sheeran. A veteran of World War II, Frank joined the Teamsters Union and became a truck driver before he started committing all sorts of crimes and hits for the Bufalino crime family.

Keeping in Line With Traditional Scorsese Themes, the Film Is Very Much About an Outsider Who Ingratiates Himself With a Tight-knit Group of Killers, Shysters, and Thugs.

Getting back to Frank’s bloody profession, The Irishman is based on the non-fiction book, I Heard You Painted Houses, by Charles Brandt. The rather innocuous title is a mob euphemism for the blood splatter that occurs when a hitman “whacks” a person. If you added “I also do my own carpentry,” it meant you also disposed of the body as well.

I just wish the monster of a script by Steven Zallian (Schindler’s List, American Gangster) had done more of a deep dive into why Frank was so willing to kill without any qualms. There’s no question of his brutality and cold-bloodedness, but no explanation as to why. Of course, it could just be that Sheeran was a sociopath who didn’t share the same qualms about murder like the rest of us do. Maybe that’s the point of the movie: everyday people do bad stuff all the time for no good reason. Frank, who killed Nazis in Italy, became the very nondescript murderer he was fighting in Europe.

Mostly set in the 1950s and 1960s, the movie de-ages De Niro with the same CGI technology used in Marvel movies like Ant-Man and Guardians of the Galaxy Vol. 2. Advances in VFX have come a very long way, but the tech still isn’t fully flawless and some scenes with young Frank look more like a high-quality video game cut scene than a live-action film.

At worst, it can seem like Zemeckis-induced motion capture nightmare, but after a while, the uncanny visuals become more normalized in your brain that, at first, is telling you something isn’t quite right.

Surprisingly, the de-aging actually works better for Joe Pesci, who came out of acting retirement to play Russell Bufalino, leader of the above-mentioned crime family. Unlike his more unhinged characters in Goodfellas and Casino, Pesci turns in a restrained performance that is nevertheless effective. Russell is a man who doesn’t need to raise his voice or throw a punch to get his way.

It is through Russell that Frank becomes the personal bodyguard for Jimmy Hoffa, famed president of the Teamsters who gave plenty of loans to the mob during his powerful tenure. Despite being one of the oldest members of the cast, Pacino (who turns 80 next year) is, in my opinion, the real star of The Irishman. He gives the best performance out of everyone, exuding manic energy that harkens back to his iconic turn as Tony Montana in Scarface.

Jimmy Is Charismatic, Yet Quick To Anger, Easy To Get Along With, Albeit Stubborn as a Mule. He’s an Obstinate Fellow and Only Becomes More So When He Attempts To Take Back the Leadership of the Teamsters After His Stint in Prison.

He and Sheeran become fast friends, their relationship organically developing over the course of long talking sequences that permeate the entire movie. That’s why it feels extra heartbreaking when Frank is tasked with murdering his good pal when Hoffa threatens to blackmail and extort the mob. The lead-up to Jimmy's murder is excruciatingly drawn out, the suspense stretched to its absolute limit so that the outcome is practically an anticlimactic relief when it finally arrives via a burst of 2-3 gunshots in a quiet Detroit suburb.

A dynamite cast aside, Scorsese is also an accomplished master of recreating specific places in time. The camera movements are sweeping, the production design lavish, and the costumes pitch-perfect down to the very last detail. Add in a bunch of great period-specific music and The Irishman is a scrumptious feast for the ears as well as the eyes.

Strip All of It Away and You’ve Still Got Quintessential Scorsese: Wise Guys Cracking Wise.

When it comes to the project’s take on history, there’s a Tarantino-esque playfulness that frames momentous events (e.g. the Bay of Pigs fiasco and Kennedy assassination) in new and borderline comedic ways. Folks like Bobby Kennedy and Richard Nixon pop in and out, but they’re just peripheral characters in what is basically a Rosencrantz and Guildenstern Are Dead-type of a story that puts the spotlight on minor, unnamed players who helped shape mid-20th Century America.

If the movie drags anywhere, it’s during the ending where Frank, now wasting away in a nursing home, is alienated from his children and spends his days praying for forgiveness with a priest and rebuffing FBI agents who want to know more about the Hoffa case.

But even while the ending could have stood to lose a few pounds, it does feel like a commentary on the unsavory repercussions of a hitman’s actions. Sheeran pretty much dies old and alone, his friends and handlers from the glory days long in the grave.

He barely feels guilt for what he’s done (save for Hoffa) and protecting the secrets of men who no longer hold sway over him. When the FBI agents inform him that his lawyer is dead, Frank asks “Who did it?” as if there are still assassins hiding around every corner. “Cancer,” replies one of the nonplussed agents, underscoring that the pitiful old man is still fighting a paranoid war that ended a long time ago.

The Irishman is about the ghosts of the past as much as it is an exploration of organized crime. As such, it is Scorsese’s most personal project to date; as he gets older, he’s looking back at everything he’s done and how it all resonates in the modern-day. It’s sentimentality without all the sugary sweetness of nostalgia.

Currently enjoying a limited theatrical release, The Irishman drops on Netflix Nov. 27. While it may sound more appealing to watch a nearly 4-hour flick in the comfort of your own home, you should really try to catch this one on the big screen if you can.

As the old saying goes, “Fuggedaboutit!”