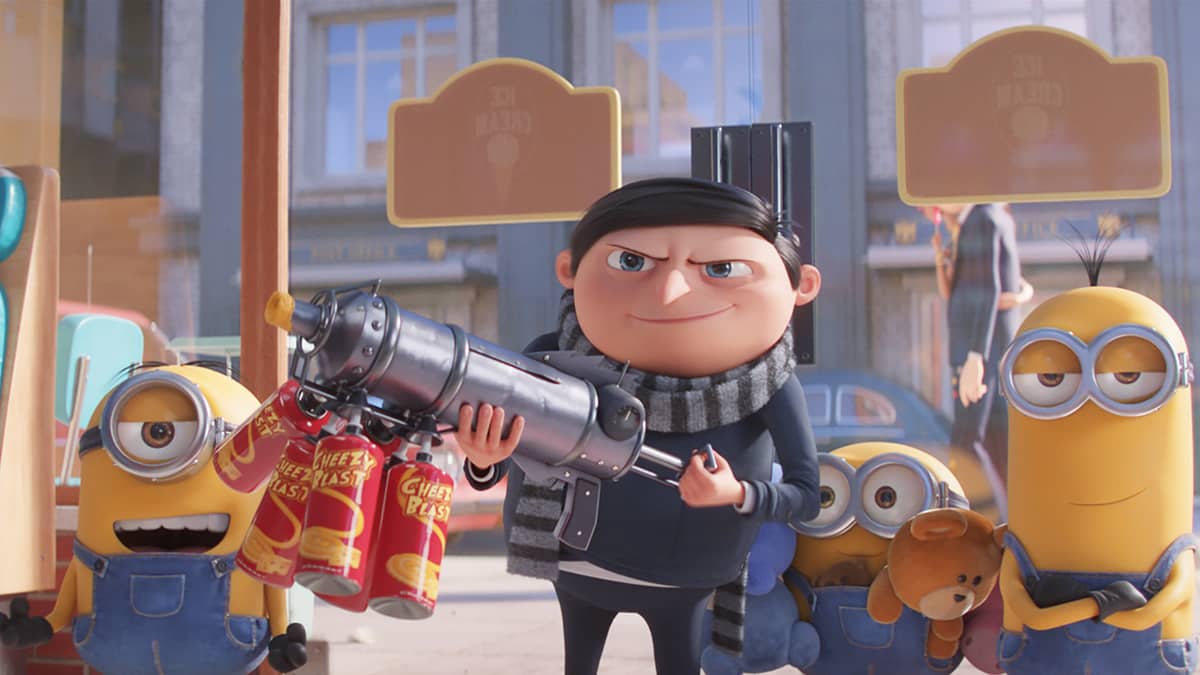 Thank goodness, giving the people what they want doesn’t always have to be a bad thing. Because let’s face it, Minions: The Rise of Gru may as well cut out the titular anti-hero entirely, since the adorable henchmen have always been the real stars of the Despicable Me franchise.

And do they ever play to their strengths in yet another sequel to a prequel of a long-running corporate franchise. But even the most hardened of hearts may find it difficult to be really mad when these babbling bumblers give puppy dog eyes no less than three times in this movie, which is so effective it’s reduced me to alliteration. But weirdos and villains are not only having a moment, they are the moment, so bring it.

The Rise of Gru sees the Minions having worn down 12-year-old Gru (Steve Carell) into still grudging acceptance and mostly settled into his 1976 suburban basement as he plots his way to evil’s big leagues. When his favorite team of supervillains, the Vicious 6, announce they have an opening, Gru jumps at the chance to join. Of course, the Minions tend to hinder as much as they help, and after Gru’s attempts to impress his non-heroes backfires spectacularly, both boss and underlings find themselves in a fight to prove their prowess and live to tell about it.

The determined devotion to cuteness would be annoying if Rise of Gru weren’t also so damn fun and unabashedly retro. Jokes about old technology abound, and old age is no obstacle to holding your own against those who are a quarter of it. It might just be born of respect for a cast that’s mostly reached a certain age, from Alan Arkin as a grizzled villain who goes from antagonist to mentor, Michelle Yeoh as a martial arts master, Julie Andrews as Gru’s self-involved mother, and RZA as a friendly biker.

Then there’s the whole damn cast of the Vicious 6, who are a vocal force unto themselves, with Lucy Lawless as an evil rear-kicking nun who knows how to run with a theme, as well as the likes of Danny Trejo, Dolph Lundgren, and Jean-Claude Van Damme providing support. If Taraji P. Henson is the only one who’s really allowed to strut her vocal stuff as their leader Belle Bottom, she does such fiendishly stupendous work she could carry a whole spin-off herself.

Never fear though, the hijinks are mostly what you expect from a “Minions” movie, with any freshness derived from how little you could predict just what these cretins get into. There’s wisdom too, in the lack of attempts at coolness or real peril, with the bad guys mostly kept reassuringly, hilariously incompetent. It’s certainly easier to swallow when Gru and his pint-sized accomplices are kept mostly apart, with their subsequent development independent of each other, only to reassuringly reunite just in time to confirm their status as one big, weird unconventional family.

It also doesn’t stretch things out, thankfully keeping the zaniness at ninety minutes. If it’s mostly free of anything deep (there’s even rainfall at the saddest moments), the laughs are constant, and it’ll be a relief for parents to put on a movie with a great 70s soundtrack rather than a new earworm such as “Let It Go” and “We Don’t Talk About Bruno” that will slowly drive them insane on repeat. But let parents, children, and stoners alike rejoice: they can relax and let the good times roll.

Minions: The Rise of Gru will be exclusively in theaters Friday, July 1.

What To Do When The Discover Button Is Missing on TikTok