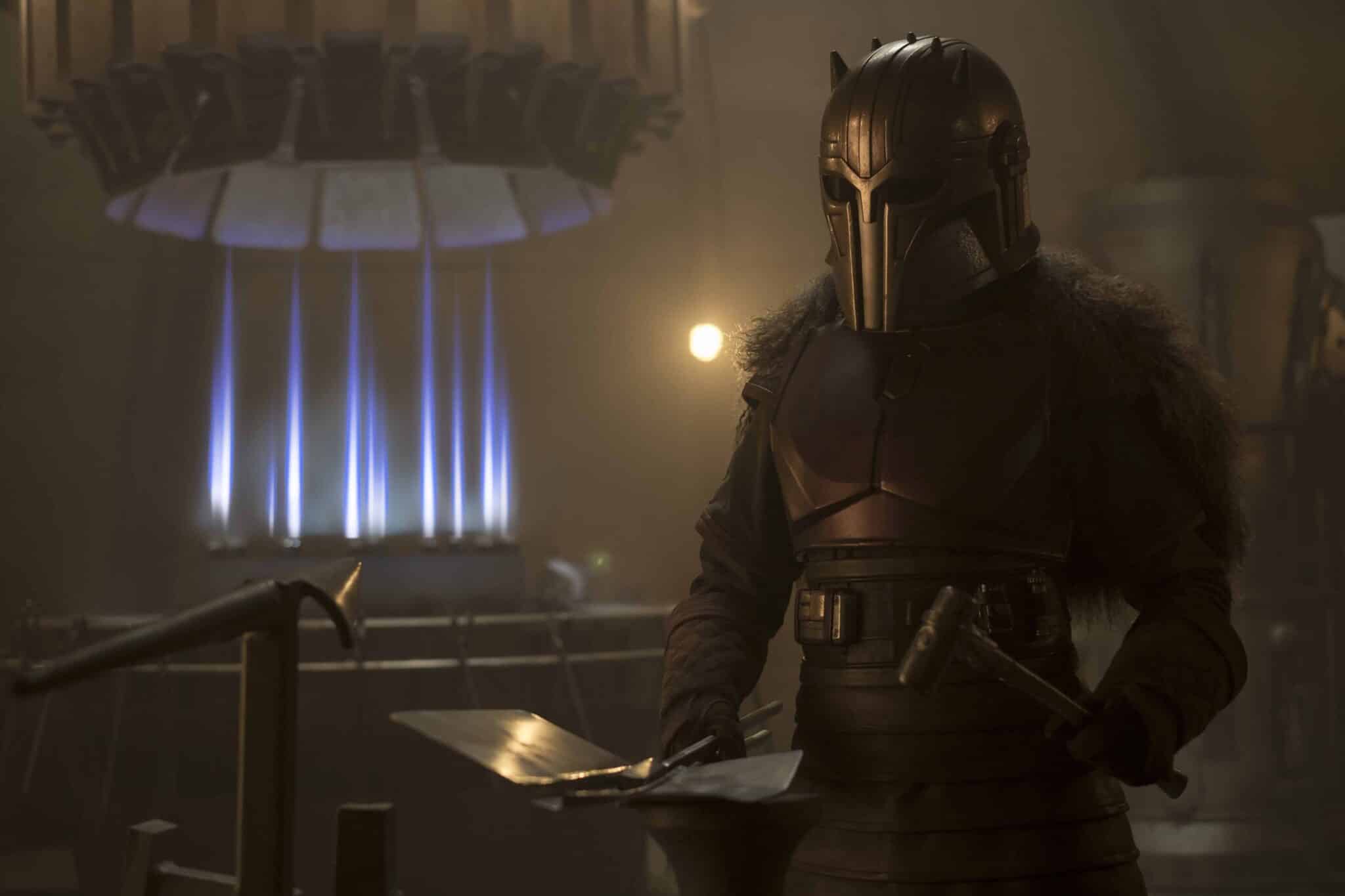 ***WARNING! The following contains major plot spoilers for Episode 8 of The Mandalorian!***

And just like that, Season 1 of The Mandalorian is over on Disney+.

It seems like just yesterday that I was watching the pilot episode in a Manhattan Starbucks. Unlike Baby Yoda, the show grew up so fast—I'm not crying, you're crying! Ok, maybe I'm crying just a little bit, but that's only because the first live-action Star Wars show in history was a rousing success. Only a last-minute appearance from Boba Fett would have set it over the top, but hey—you can't win em' all.

The series (created by Iron Man‘s Jon Favreau) has been so popular, that fans are saying via social media that they prefer it to The Rise of Skywalker (read our review here).

So, what happened in the season finale? The question I really should be asking is: “What didn't happen?!” So many things occurred in Chapter 8: “Redemption” (written by Favreau), which has the longest runtime of any episode released thus far: 48 minutes. There's a lot to unpack here, folks, so let's hop to it, shall we?

After the arrival of Moff Gideon (Giancarlo Esposito) and the death of Kuiil (Nick Nolte), all seemed lost for our heroes: Mando (Pedro Pascal), Cara Dune (Gina Carano), Greef Karga (Carl Weathers), and Baby Yoda. With Taika Waititi (Thor: Ragnarok, Jojo Rabbit) stepping into the director's chair for this episode, however, “Redemption” begins on a much lighter and more comedic note.

No joke, we spend a good five minutes with the two speeder troopers (Jason Sudeikis and Adam Pally) that snatched up “BY” last week, and they're basically two of the Three Stooges based on how incompetent they are at their jobs. Their Abbott and Costello-esque routine is some of the funniest content in the Star Wars canon since Han Solo's “We're all fine here, now, thank you. How are you?” in 1977's A New Hope.

Unfortunately, the comedy breaks up when IG-11 (voiced by Waititi) shows up to totally wreck the troopers and retrieve The Child. As you recall Kuiil reprogrammed the bounty hunting droid to become a nurse and protector. Despite Mando's protestations about not trusting the machine, the droid is pretty great at his new job and just plows through Moff Gideon's Stormtroopers as if they were made of tissue paper.

Back in the Nevarro town square, Mando, Cara, and Greef are looking for a way out of their predicament. Gideon has a big-ass gun and he's not afraid to use it on them. Mando has the bright idea to escape into the sewers and seeks refuge in the newly-relocated covert of the last-surviving Mandalorians. You'll recall that they were forced to find a new hiding spot after they helped Mando escape with The Child in Episode 3.

While Moff Gideon (an ex-Imperial governor thought to have been executed for war crimes after the fall of the Empire) is a brand-spanking-new character, he proves himself well-informed on the pasts of our protagonists. He provides a brief rundown of Cara, who hails from the destroyed Alderaan (her full name is “Carasynthia”) as well as Mando, whose real name is Din Djarin. Gideon, it turns out, was in charge of the “purge” of Mandalore and “laid waste to fields of Mandalorian recruits in The Night of a Thousand Tears.”

We then flashback to Din's turbulent childhood when his parents were murdered by Imperial droids. I think I'm not the only one in saying that there was room in that cellar for all three of them. It's Jack, Rose, and the door all over again! Anyway, Din's about to be blown away when he's saved by a battalion of Mandalorians, who rescue him and raise him as a foundling. The term “Mandalorian” refers not to a race of people, but to a creed. THIS IS THE WAY, melon farmers!

Back in the present, IG-11 shows up like a badass to save the day. He mows down trooper-after-trooper, evening the odds and allowing Mando, Cara, and Greef to join the fight outside the cantina. They gain the upper hand, but Din gets blasted back and grievously injured by the cunning Gideon. Dune drags Mando, who is bleeding profusely, back inside, and IG-11 (carrying BY) and Karga follow them.

Gideon tells his flamethrower trooper to burn them out, but Baby Yoda indulges in his Force powers yet again and stops the fireball from killing everyone inside the cantina. It's a badass moment that underscores the fact that The Child isn't just there to look cute. On his way to dying, Mando tells Cara, Karga, and IG-11 to take the baby and leave him behind.

IG-11 refuses and stays behind to tend to the Mandalorian's wounds. Din refuses to remove his helmet, stating that no living creature has ever seen his real face. Welp, it's good that IG-11 is not a living thing and he removes the helmet to reveal…Pedro Pascal's face! Yes, we finally get to see what's under the hood, and it gave off some Darth-Vader-Takes-Off-His-Helmet vibes from Return of the Jedi.

The former killer droid sprays some sci-fi healing mist on Din's face and our hero is as good as new, following his friends into the sewers. They make it to the Mandalorian covert only to find a pile of discarded helmets. Mando accuses Karga of massacring his people, but Greef denies the accusation.

Finally, the Armorer (Emily Swallow) shows up to break the tension and inform Din that the casualties caused by the Imperial forces are not the responsibility of anyone; the other warriors knew the risks they were taking when they helped him escape with the Child. She adds that some Mandalorians did escape the planet and are currently bouncing around the galaxy.

The Armorer, who stayed behind to take care of all the leftover Beskar, then becomes the first character on the show to mention the word “Jedi” after hearing of The Child's strange abilities. She describes the Jedi as “an order of sorcerers” that once battled with Mandalore the Great. My question is how do our main characters not know about the Jedi when the Empire was defeated by the actions of a Jedi, Luke Skywalker? In the words of Maz Kanata, I guess it's a question for another time.

Gifting Mando with more ammo, a friggin' jetpack (hell yeah!), The Armorer also welds a signet to his armor.  Inspired by the Mudhorn he defeated with BY in Episode 2, the signet forges a clan-like bond between Din and The Child. Mando is now tasked with either training the kid when it comes of age or return him to his home planet, of which we still know very little.

A bunch of Gideon's stormtroopers show up after this and the Armorer takes care of them in some of the most brutal ways we've ever seen in Star Wars universe: she cracks helmets and even throws one of them into her forge. Hot damn! Meanwhile, Din, Cara, Greef, IG-11, and Baby Yoda float to safety on a lava river in a boat gondola'd by an R2 unit that has arms and legs. I mean, what a reveal with that, right?!

The surprises are seemingly endless in the finale.

As the group makes its way down the lazy lava river, Mando spots an ambush at the exit. In a moment that some on social media are comparing to the end of Terminator 2: Judgement Day, IG-11 sacrifices himself to save the people he was programmed to protect. He walks through lava toward the awaiting stormtroopers and self-destructs. Din, who was highly mistrusting of the droid in the first place, actually feels sadness over this loss.

Our heroes make it out alive, but then have to contend with Moff Gideon's TIE Fighter. Anyone else loves the moment when Karga tried to get BY to use his Force powers again and BY just waved back? God, that was great. Taking off on his jetpack, Mando brings down the Fighter with an explosive and Gideon makes a crash-landing. Cara decides to stay on Nevarro with Greef and mop up any lingering Imperial troopers. Karga harkens back to the original trilogy yet again by using the words “scum and villainy.”

As always, Mando and Baby Yoda take off for their next adventure, but now they're closer than ever before. Back on Nevarro, a Jawa has wasted no time in stripping down Gideon's TIE Fighter. But here's the rub: Gideon is still alive and cuts his way out of the ship with a Darksaber, a very unique kind of lightsaber that has its place in the Expanded Universe and the animated Star Wars show. It's also driving fans nuts online.

Since I'm not an expert on either, here's a Forbes article explaining what a Darksaber is. Whether or not you know about this piece of Star Wars canon, it's further proof that Favreau is lucky to have Dave Filoni on his team as a writer/director/producer; Filoni is well-steeped in all of the franchise's lore, even its more obscure parts.

And now the wait begins for Season 2…

For our guide to the entire series, click here. For our recaps of Episodes 1 – 7, click on one of the links below:

Review: ‘Star Wars: The Rise of Skywalker’ Wraps up a 42-Year Saga in Beautiful and Unexpected Ways

Are You Ready for Early Retirement or Just Kidding Yourself?