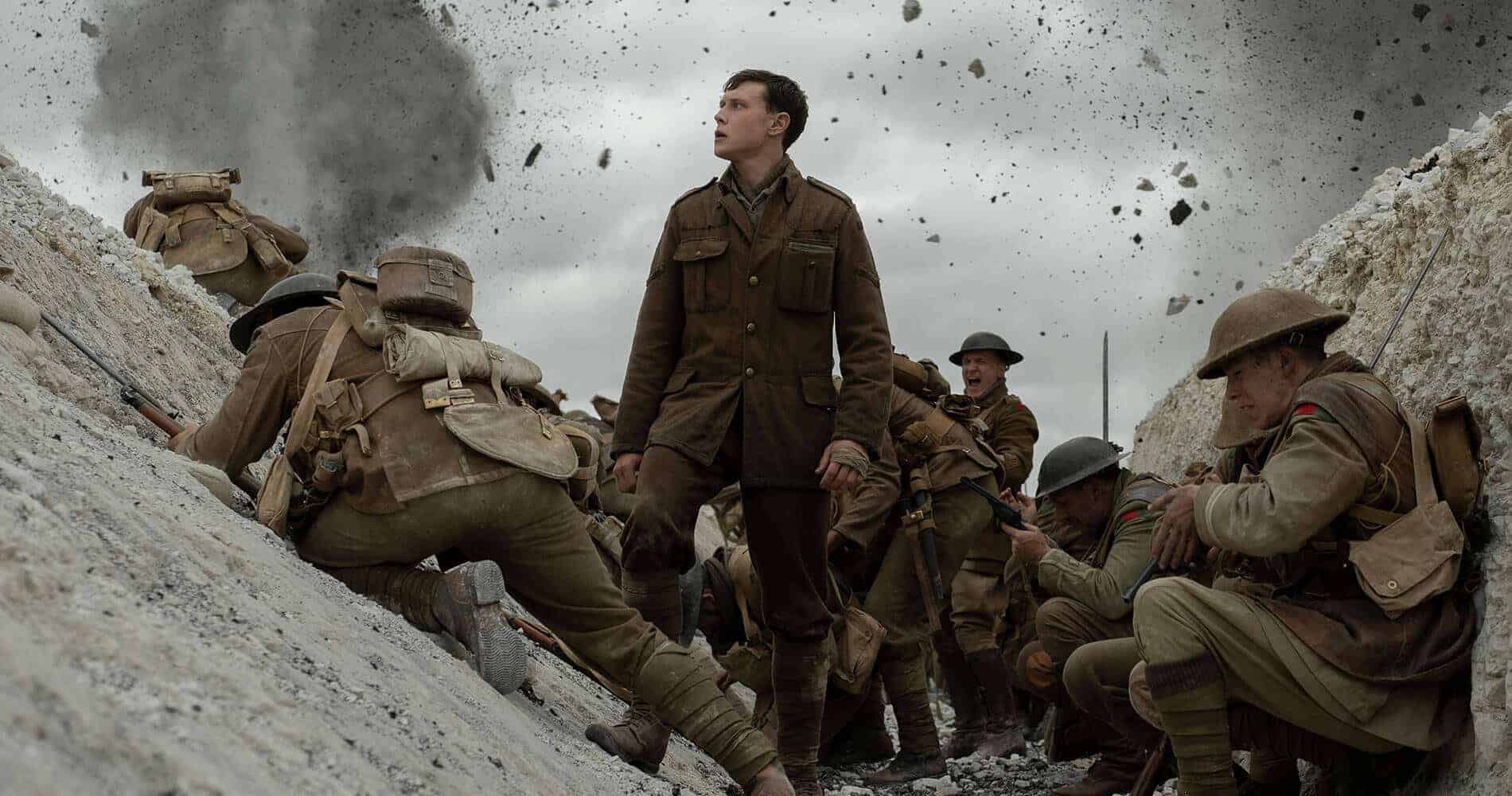 If you thought Alejandro G. Iñárritu was nuts to try and make an entire movie in a single tracking shot with Birdman, you ain’t seen nothing yet, dear viewer. As fate would have it, that was just the appetizer before the main course: Sam Mendes’ 1917—a World War I drama that has set a new standard for the war movie genre.

I’m not kidding, this might just be the best war film made since Saving Private Ryan, which reshaped everything that followed it. Speaking of Spielberg, 1917 is the movie War Horse desperately wants to be when it grows up.

It may be late in the season, but this movie, which takes the “one single shot” approach to the extreme in the best way possible, will skyrocket to the top of awards season buzz like a bullet train driven by the White Rabbit from Alice in Wonderland.

Taking place in April of 1917 (the penultimate year of WWI), the film opens on a tranquil field of poppies before our two protagonists—Lance Corporal Blake (Dean-Charles Chapman) and Lance Corporal Schofield (George MacKay)—begin a mission that wrenches us away from the relaxing beauty of nature and into the dreary hustle and bustle of a muddy manmade trench.

The jarring shift is enough to remind us that this is war and it’s time to get down to business. And yes—technically, the Brits are trying to defeat the Huns.

Even before Blake and Schofield set off on their dangerous journey to prevent a slaughter from taking place, Mendes and cinematographer Roger Deakins (Skyfall, Blade Runner 2049) smartly take their time in setting up the trenches as a terrible place to live for months on end.

As we trudge through the dirt with the two corporals, we get a sense of the place: a soldier sits huddled up against the cold, another man thoughtfully writes in a journal, and a small wooden sign ironically tells us that we’ve stepped into “Paradise Alley.”

It’s the monotonous drone of everyday life on the front lines of the Great War.

In a darkened bunker, the corporals receive their mission from General Erinmore (a stoic Colin Firth). They must deliver a message that will prevent more than 1,600 soldiers (one of them being Blake's brother) from walking into an ambush. The set-up is simple, carrying wafts of Private Ryan, but the campaign is anything but.

Firth is just one of several famous British actors to pop in and out of the story just as Paul Giamatti and Ted Danson did in Saving Private Ryan. Each brings their own unique acting prowess to the glorified cameos.

Moreover, each high profile appearance delivers a different outlook on the conflict raging on in France: resigned cynicism, sage field experience, pugnacious obstinance, and unbridled emotion. By far, though, Andrew Scott (Black Mirror) and Richard Madden (Game of Thrones) are the standouts of all the familiar faces you’ll see onscreen.

Stepping out of the relative safety of the trenches, Blake and Schofield venture into No Man’s Land, a macabre marsh of half-decayed horses, rat-infested corpses, and abandoned tanks stuck in the quagmire. The visuals are so vividly grisly, that you can almost smell the fetid odor of death in the air as the corporals cautiously make their trek to the German side of the battlefield.

As they cover more land, the script by Mendes and Krysty Wilson-Cairns gives us a look into the conflicting ideologies of the duo. Blake is more gung-ho about the mission, eager to save his brother, while Schofield has become extremely jaded by what he's seen. Somewhat angry that Blake chose him to undertake the assignment, he refers to field medals as “worthless pieces of tin” and admits that he swapped his own with a French soldier for a bottle of wine because he was thirsty.

When a downed German biplane (aerial dogfights are constantly pockmarking the overcast skies of the devastated French countryside) throws a shocking wrench into the whole plan with what is most certainly a nod to North by Northwest, Schofield is forced to take up more responsibility than he previously wanted to.

Basically carrying the entire film on his shoulders, MacKay turns in a hauntingly haggard performance that conveys unsullied dedication in every single frame. You can just imagine that the dude slept like the dead for a week after shooting wrapped.

The “never-ending” take may sound like a cheap gimmick at first, but it actually is the best thing for a project like this. There is no respite in the form of cuts that can, ever so briefly, let us forget that war is indeed hell.

We go where the characters go, see what they see, and do what they do. We never leave their side and because of that simple fact, we are trapped on the dangerous quest with them, offered no escape, no reprieve, until the objective is complete. Documentary-like impassivity is the name of the game as we witness one man's struggle to survive play out in real-time.

There are long stretches without dialogue, but even during these moments, you’ll feel the gnawing presence of anxiety, the adrenal rush of fight or flight as heavy breathing and beating footsteps hijack the soundtrack for a while.

Thomas Newman’s uncharacteristically restless score is always looming in the background, there to warn you that you shouldn’t let your guard down for even a second.

Of course, you can’t really shoot a movie, especially one of this scope, in a single take. In today’s VFX-reliant world, that would be utter madness, but the cuts are subtle and cleverly hidden via darkness, rushing water, exploding debris, and fits of unconsciousness.

Once a shot begins, however, you need to hold on because it doesn’t stop for anyone or anything.

Deakins, who has worked with Mendes since 2005’s Jarhead (he’s the Janusz Kamiński to Mendes’ Spielberg if you will), cements himself as one of the most genius cinematographers of the last 20 years. His camera is fluid and unwavering, refusing to keep the audience away from the visual horrors of war and mankind’s propensity for violence.

His lighting and composition are unparalleled, especially when we make it to a bombed-out French village, the dying embers of which cast monstrous shadows upon the land as if revealing a hidden world filled with malevolent spirits of bloodshed.

After the final explosive battle, you’ll feel just as exhausted as Schofield who has been buried by rubble, cut by barbed wire, shot at by enemy gunfire, and forced to crawl through a literal river of bodies. Only when the film ends as it began, with the corporal closing his eyes in a peaceful meadow away from the visceral realities of war, will you be able to breathe a sigh of relief.

Wearying? Yes. Ghastly? Absolutely. But also a necessary evil to try and make the audience feel even a tiny sliver of what it was like to fight through such an awful conflict that claimed the lives of millions of young men.

Gritty, bleak, and just a smidge hopeful, 1917 is a masterclass in how far one can push the limits of cinema. In fact, this movie basically says that there are no limits. If you can think it up, you can commit it to film.

The director has broken the mold and the medium is never going to be the same again. This is a harrowing tale of perseverance and bravery and the profound sadness of personal loss that will dictate the course of the genre for years, and probably decades, to come.

It's not interested in giving us a history lesson in geopolitics. Indeed, there isn't a ton of explanation of WWI beyond what we see in the frame, a connotation that these men may not even know what they're even fighting for after all these years of mindless carnage.

I cannot entirely express in words how incredible this movie is.

Similar to Scorsese’s The Irishman, it is truly an event that needs to be witnessed to be fully appreciated. If I were Mendes or Deakins, I’d be working on my Oscars acceptance speech as we speak, because this film is gonna win a butt-load of those little golden statues.

1917 will enjoy a limited release of Dec. 25 before opening widely on January 10. Mark Strong and Benedict Cumberbatch co-star.

Are You Ready for Early Retirement or Just Kidding Yourself?