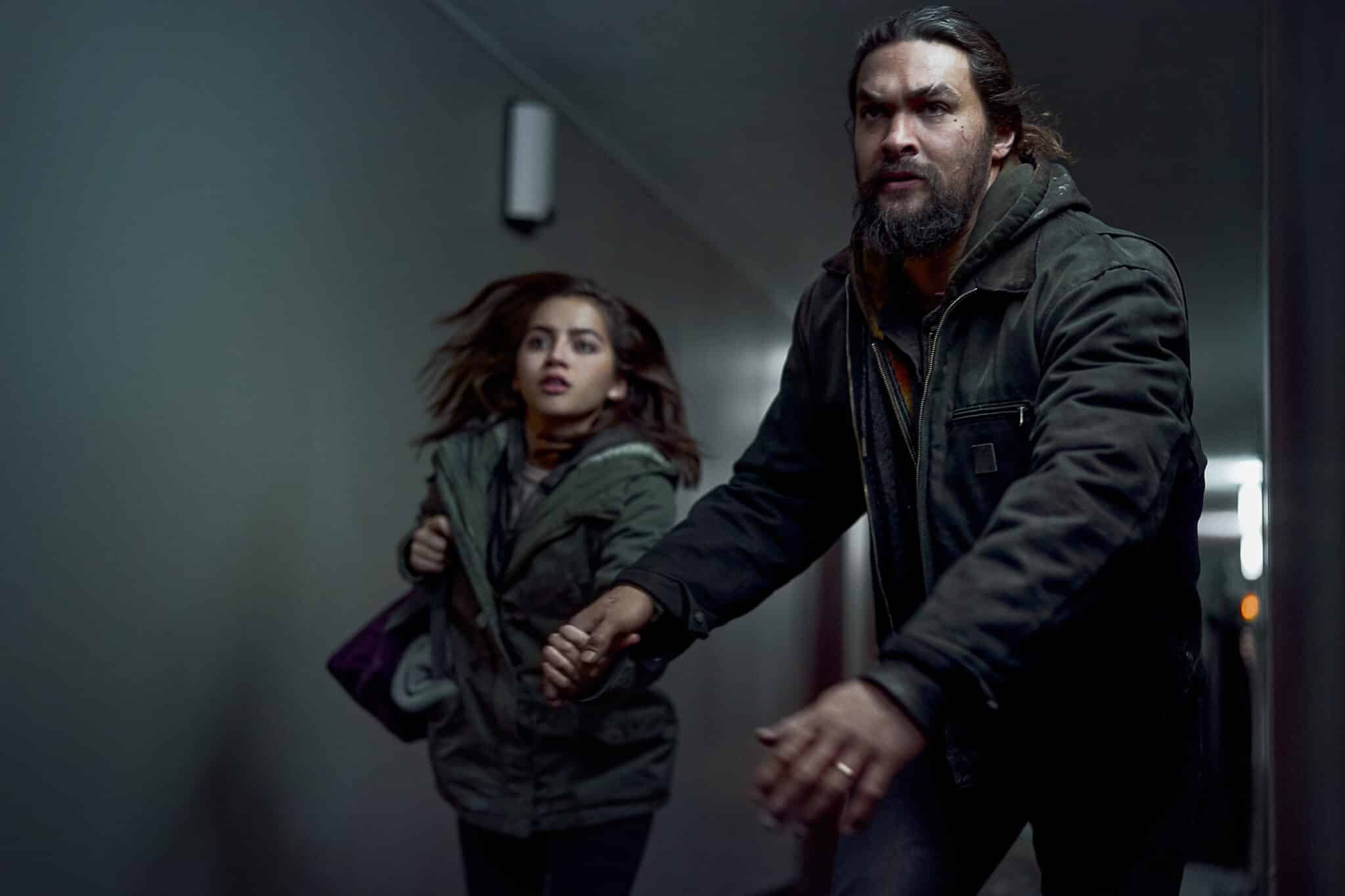 There is a certain appeal to movies like Sweet Girl. You know the type. Bog-standard “one person against a conspiracy seeks revenge” films that give your eyes something to focus on as you fold yet another load of laundry or engage in some of that dreaded cardio. Sweet Girl fits nicely into that niche for most of its running time, the Sunday afternoon Dad film.

Then, in its last 15 or so minutes, it makes a wildly brazen choice that ends up casting everything before it in a much lesser light. I can’t reveal the spoiler, per se, but I’ll do my best to explain how it undermines the (admittedly already just below mediocre) movie.

Before that, however, a bit of plot.

Ray (Jason Momoa) and Amanda (Adria Arjona) Cooper are the kind of happy couple that loves camping trips with their daughter Rachel (Isabela Merced) and posing photogenically by trees, rocks, and moss. However, the return of Amanda’s cancer throws that idyllic life into jeopardy. She gets worse quickly. A last-minute generic seems poised as the family’s savior, but that quickly falls apart, too.

The cause seems to be Generic Evil Big Pharma Corp, personified by a (briefly) appealingly slippery Justin Bartha as the CEO Simon Keeley. Ray’s anger leads him to Martin Bennett (Nelson Franklin), a journalist from Vice, but their meeting ends when a hired killer Amos Santos (Manuel Garcia-Rulfo) interrupts.

After that, Ray becomes convinced a murder campaign offers the only route to justice. He, with Rachel in tow, pursues that very agenda while Amos pursues them. A senatorial candidate Diana Morgan (Amy Brenneman), another shadowy businessman (Raza Jaffrey), and a pair of FBI agents (Lex Scott Davis and Michael Raymond-James) get swept in the punch, stabbing, and shooting that follows.

While Momoa can be capable of great charisma—see his Aquaman—he doesn’t get many opportunities here. Girl asks him to take some big swings, including a hospital hallway grief howl, but there’s nothing in between. Worse, the chemistry between him and Arjona and him and Merced ends up being perfunctory even as the movie spends 15 plus minutes establishing the family’s connection before the revenge plotline kicks in.

Much of the movie was filmed in and around Pittsburgh, and the cinematography does its best to showcase that. Even as a non-Pittsburgher, there’s enough local flavor to give Sweet Girl a distinctive sense of place. Filming on location and utilizing more than one or two landmarks is always a welcome addition to a movie. The film’s cast diversity also should come in for praise for much the same reason.

The camera does a worse job capturing the action. The quick cuts often rob the sequences of a sense of geography, excitement, and brutality. Too often, also, the extras aren’t given anything to do as the action unfolds, adding an air of artificiality. In one sequence, three characters batter each other up and down a subway car, through a window, and onto the station, and seemingly no one reacts.

Still, as it heads into the home stretch, Sweet Girl feels like a shrug at worst, especially on a TV screen. But then, the reveal.

Again, there won’t be specifics here. However, it needs to be said that the twist clues the viewer into the existent of a much more interesting, tragic, and ethically thorny tale than the one we’ve been witnessing. One can’t help but imagine the filmmakers laying out the better story and then spreading a layer of bland cliché on top. It’s also galling for how it backseats some of the cast diversity I noted above.

Finally, the reveal doesn’t improve the film. While it explains a few of Girl’s odder moments and lines, those revelations carry no insight. The movie gains no depth from its twist. And the actual moment of unveiling lands not with a gasp, but a, “really?!”

Without the twist, Sweet Girl ends up a fine enough C-grade thriller to pair with a monotonous chore. With the twist, all it gets is a…

One can’t help but imagine the filmmakers laying out the better story and then spreading a layer of bland cliché on top.

Review: Why ‘Shang-chi and the Legend of the Ten Rings’ Is a Perfect Origin Story

The 6 Best Stock Market Games To Teach Kids About Investing