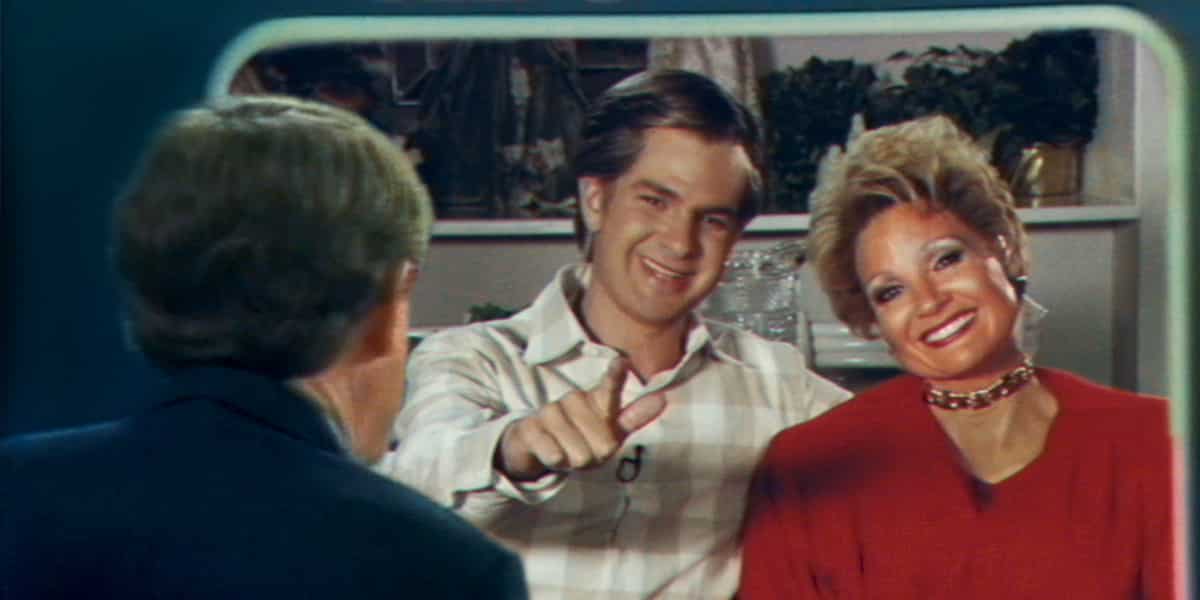 “I have a genuine love for people,” Tammy Faye Bakker says in Michael Showalter’s new film, The Eyes of Tammy Faye. Tammy Faye was a complicated woman: an evangelist and conservative television personality who was also an early advocate for gay rights and openly talked about the AIDS crisis in the worst years of the epidemic. She and her husband Jim Bakker were controversial figures to people on both sides of the aisle.

Showalter’s biopic of Tammy Faye is based on the 2000 documentary of the same name by Fenton Bailey and Randy Barbato. Abe Sylvia sometimes struggles to portray the full complexity of the Bakkers in his screenplay, leaving us with a generous interpretation of Tammy Faye.

Jessica Chastain, in addition to being a producer of the film, portrays the titular character in a stunning and transformative performance. Andrew Garfield plays her husband Jim Bakker and Cherry Jones plays her mother, Rachel LaValley.

The film opens with real news coverage of the scandal that brought the Bakkers crashing down from their empire, before flashing back to Tammy Faye’s childhood in 1952. It establishes that she felt called to the church from a young age and wanted to bring the word of God to people through her singing.

We next see Tammy Faye (now Chastain) in college where she meets Jim Bakker. The pair are instantly smitten with each other and bond over their shared calling. They leave college to get married, much to the dismay of Tammy’s mother. Their initial path isn’t smooth, but they’re enamored enough of each other to get by. (This movie is surprisingly hornier than I expected it to be.)

Before long, Tammy Faye and Jim have found their way onto television, spreading their Christian message with a children’s show, complete with puppets. Even once she has their first child, she isn’t content to sit on the sidelines, but wants to take an active role in the show. The show utilizes some time jumps forward as the Bakkers achieve massive success and wealth.

That, of course, is when things begin to go wrong. The corruption within the Church and their show comes out, just as their relationship deteriorates further. Tammy Faye has issues with prescription drugs and struggles to keep her foot in the business as the men would rather push her aside. The heights that the couple achieved only makes their fall more painful.

The Eyes of Tammy Faye, as the title suggests, is largely from her perspective. The film lets us believe that she was unaware of the corruption her husband was involved with due to some combination of her own naivete, her willingness to turn a blind eye, and his reluctance to share anything with her. It has no such hesitation about labeling Bakker as corrupt, though even then, it’s a decently favorable portrayal.

If the film were not based on real people, it would almost feel too extreme. Everything from the performances to the costumes are over the top and ridiculous, but that’s the truth behind this story. The film leans into Tammy Faye’s absurd earnestness, which lends to some fantastic comical moments.

When movies are made about religious figures, there’s always a fine line to walk in how their faith is portrayed. While The Eyes of Tammy Faye certainly points out the corruption in the Church and mocks the way that the Bakkers use their beliefs to justify their actions, it never seems to judge them for their faith itself. On the other hand, it never becomes preachy or dwells too long on their Christianity.

The design is one of the best things about the movie from the showy costumes that help ground us in the timeline to the production design, both of the TV studios and of the Bakkers’ lavish home. But it’s the makeup work that’s the true standout. Not only do they do aging work on both Chastain and Garfield, but they recreate Tammy Faye’s outlandish makeup looks. The makeup plays a role in the character development of the film, showing us how Tammy Faye is changing over time.

The true star of the show is Chastain, who starts out recognizable but transforms over the course of the film as Tammy Faye ages. She disappears into the role, to the point that you can forget that it’s her you’re looking at. Even her voice is changed to match Tammy Faye’s. She also recreates Tammy Faye’s singing, onstage and in the recording studio, remarkably well. It’s an intense performance, with several big emotional scenes that Chastain nails.

The Eyes of Tammy Faye might be too long, have some issues with pacing, and follow standard biopic tropes, but none of that keeps it from being entertaining. It’s difficult not to be entranced by Chastain’s performance as the effervescent Tammy Faye. Whether or not you’re familiar with the real Jim and Tammy Faye Bakker, The Eyes of Tammy Faye is an engaging watch.

Check out our full coverage of the Toronto International Film Festival.

The Eyes of Tammy Faye

The Eyes of Tammy Faye might be too long, have some issues with pacing, and follow standard biopic tropes, but none of that keeps it from being entertaining.

Every Batman Movie Ranked and Where to Stream Them

30 Ways To Make Money on the Side