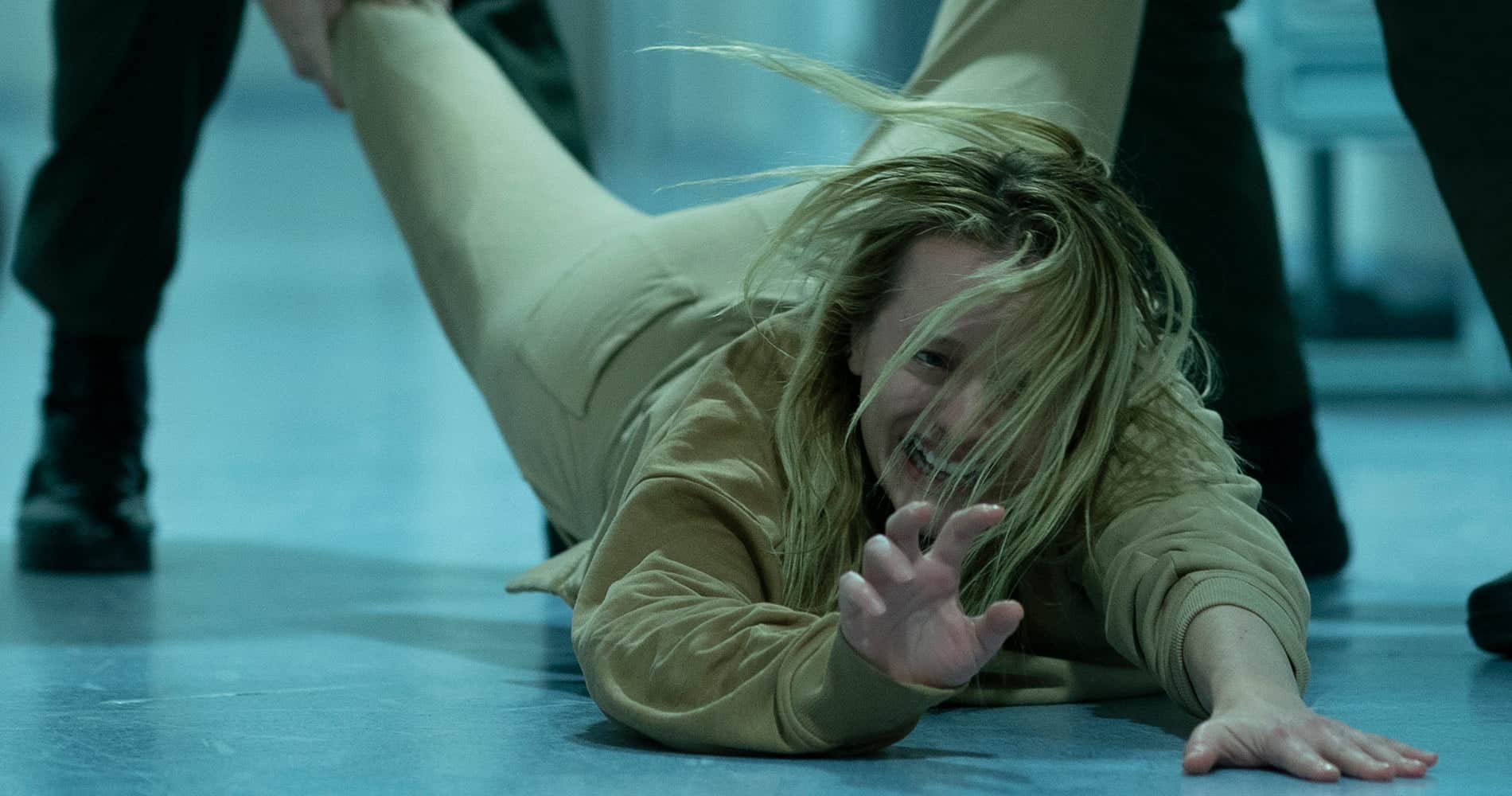 ***WARNING! The following contains certain spoilers for The Invisible Man!***

Any good horror movie should have a moment that catches you off guard, a moment when all the rules change, and the story crosses a line you thought was sacred. The Invisible Man (Universal Pictures' first monster-related project following the dissolution of the studio's ill-fated “Dark Universe” idea) has that moment around the one-hour mark, and I think it’s one of the greatest horror set-pieces in recent memory.

I’m obviously not going to spoil anything for you, but rest assured that when the scene played out onscreen, my jaw—firmly clenched to the rest of my face for the first 60 minutes—nearly dropped to the floor.

But that's the problem with the film from writer/director Leigh Whannell (Saw, Upgrade)—it takes too damn long to pick up momentum. Don't get me wrong, the second half of The Invisible Man is abuzz with energy and definitely worth the price of admission, but if you've seen all of the trailers and clips released up to this point, you've basically seen the first hour of the movie. While there are a few exciting moments here and there, all of the good content (at least from the beginning portion of the story) was already spoiled by a case of too much marketing.

It's a real shame, although I can totally understand a studio needing to market its goods to the public. Going off that, I realize that taking out all the good stuff would have made for some pretty lousy promotional materials.

Besides its title, this Invisible Man project shares absolutely nothing in common with the H.G. Wells novel or the iconic 1933 film adaptation that it inspired. Instead of following the scientist who can hide from the naked eye, Whannell's screenplay follows Cecilia Kass (Elisabeth Moss), the girlfriend of the said scientist, Adrian Griffin (Oliver Jackson-Cohen). Adrian, a gifted engineer in the field of optics, is an emotionally and physically abusive partner, prompting Cecilia to make her grand escape from him in the opening minutes of the film.

Again, this would've been a real nail-biter of an introduction, had it not been for all of the trailers. Plus, a bunch of stuff from the trailers (like the handprint shower scene) didn't even make it into the final cut.

Now staying with her police officer friend, James (Aldis Hodge), and his young daughter, Sydney (Storm Reid), Cecila tries to regain some semblance of a normal life. Unfortunately, she's afraid of her own shadow following the irreparable damage inflicted upon her by Adrian.

Finally, Cecilia's sister, Annie (Harriet Dyer), arrives with some good news: Adrian is dead and has left his ex-girlfriend a sum of $5 million. Not too shabby, except all of that happiness ebbs away when strange things start happening around and to our main character. As you've probably seen in the trailers, Cecilia comes to suspect that Adrian is still alive and has found a way to make himself invisible (think Mysterio's illusion-based tech in the Marvel Universe), so that he can mess with her. To say any more about the plot would be to tempt the spoiler gods, so let me praise Ms. Moss's performance instead.

The whole Invisible operation rests entirely on Moss's shoulders, and she carries the weight with the ease of Atlas. She gives a masterclass in acting, her range being second to none. Frightened, sad, bereaved, nervous, confused, skittish, determined, happy. Literally, think of emotion, and Moss shows it off as Cecilia is driven to utter madness from Adrian's hijinks that make her look like a crazy person in the eyes of other people.

“Hijinks” is probably too soft of a word to use since things get pretty messed up around that halfway point.

Beyond Moss, Aldis and Reid have some excellent comedic father-daughter chemistry, while Adrian's lawyer brother, Tom (Michael Dorman), is played to standard sleaze-bag specifications. At the end of the day, though, The Invisible Man is about a woman taking back control of her life. It's a horror tale for the #MeToo era that explores the deadly fallout of toxic masculinity and domestic abuse. There's a reason the villain can't be seen; he represents any man guilty of abuse, lies, gaslighting, and the rest. In short, Adrian is the Maple Street of sh***y guys.

It seems Whanell knew precisely what he was doing by picking this particular IP to be Universal's latest monster remake. Despite enjoying a sizable cinematic legacy over the years, The Invisible Man is slightly less famous (or utilized, shall we say) than Dracula, Frankenstein, The Mummy, or the Wolfman.

This means that the character comes with less baggage and fewer audience expectations. He's also the most relatable of the studio's creature feature properties because there are no ancient curses, spells, or resurrections involved in his backstory. The Invisible Man is the most human of the Universal rogues' gallery. Because of that, he has the uncanny ability to reflect our fears and transgressions right back at us.

He's not a monster in the mythical sense, but that's to show us that man can be just as monstrous as any fictional beast from legend or folklore.

As an aside, I've never seen the 1933 original, so it's a wonder why I was so sad that there was no reference to the character's classic look of bandages, sunglasses, and smoking jacket. I don't know that iconic design has just always kinda fascinated me for some reason. Ok, tangent over.

Is the 2020 version of The Invisible Man perfect? No. Is it predictable and cliched in places? Absolutely. Nevertheless, it's a taut psychological thriller with a solid mix of chutzpah, originality, and catharsis that mainly keeps the more questionable aspects at bay. Also, this film feels like a very solid starting point for Universal's fresh approach to monster movie reimaginings.

The anthological and allegorical method is the best way to go from here on out. Putting the cinematic universe aside in favor of modern-day fables angled through the lens of horror is simple, yet effective. Like the titular character of this particular picture, it's been staring us in the face this whole time.

The Invisible Man opens in theaters everywhere this Friday (Feb. 28).