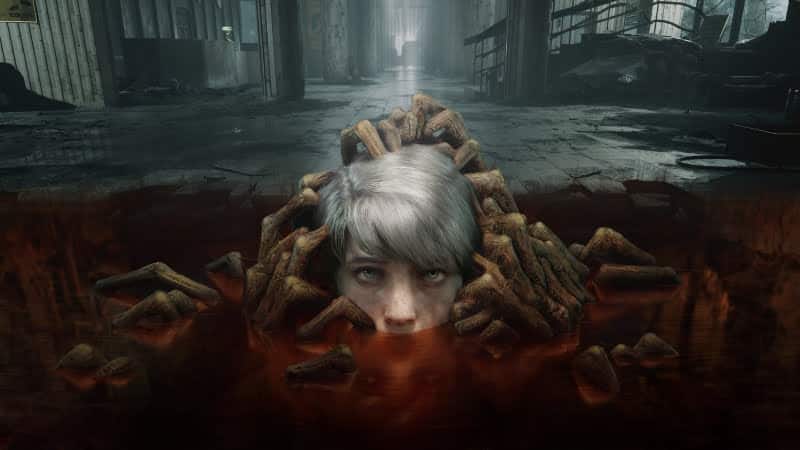 Bloober Team is back at it with another horror game, this time with The Medium, a psychological adventure in which you can experience two realities at once.

While it's a little rough around the edges due to being developed by a smaller studio with a lower budget, The Medium is mostly enjoyable, even if it doesn't always stick the landing. 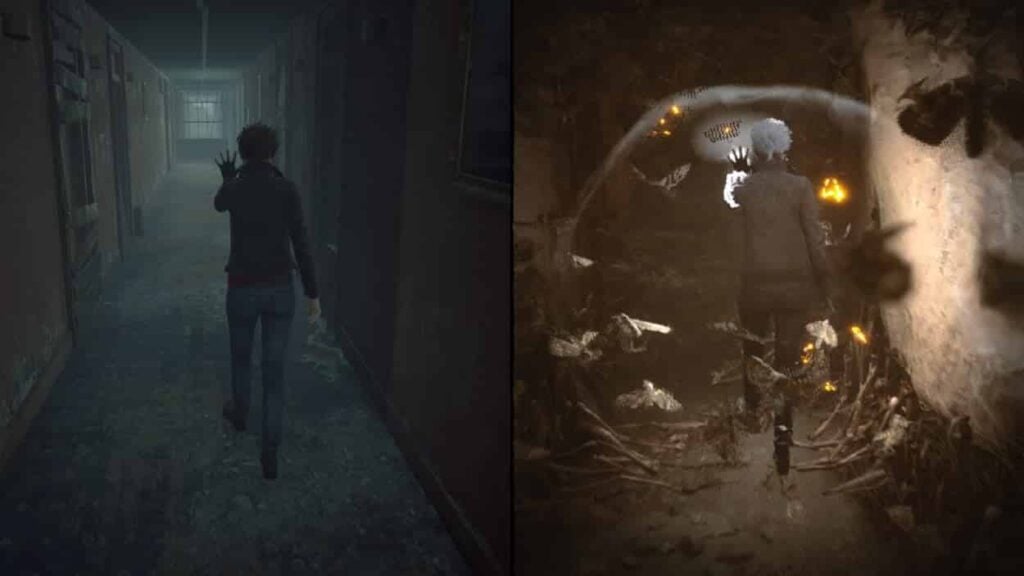 In The Medium, you play as Marianne, a — you guessed it — medium with psychic powers. The game's main hook is that you can navigate across two realities and, in some cases, both at the same time. This is one of the game's selling points, in which you can see and control both versions of the character across the two realities in a split-screen format. It's a unique idea that Bloober Team deserves credit for.

The Medium is a slower burn, with very little action gameplay and a greater emphasis on narrative and exploration. We won't call it a “walking simulator” here — frankly, because that term doesn't do this game justice, and because it does include a few action-packed sequences throughout the nine-hour story. What's fascinating is that many of the game's puzzles involve traversing from one reality to the other. There's the real world and the spirit world, which is full of darker imagery.

What you do in one reality can impact the other — leading to some smart puzzles, even if they aren't necessarily difficult. 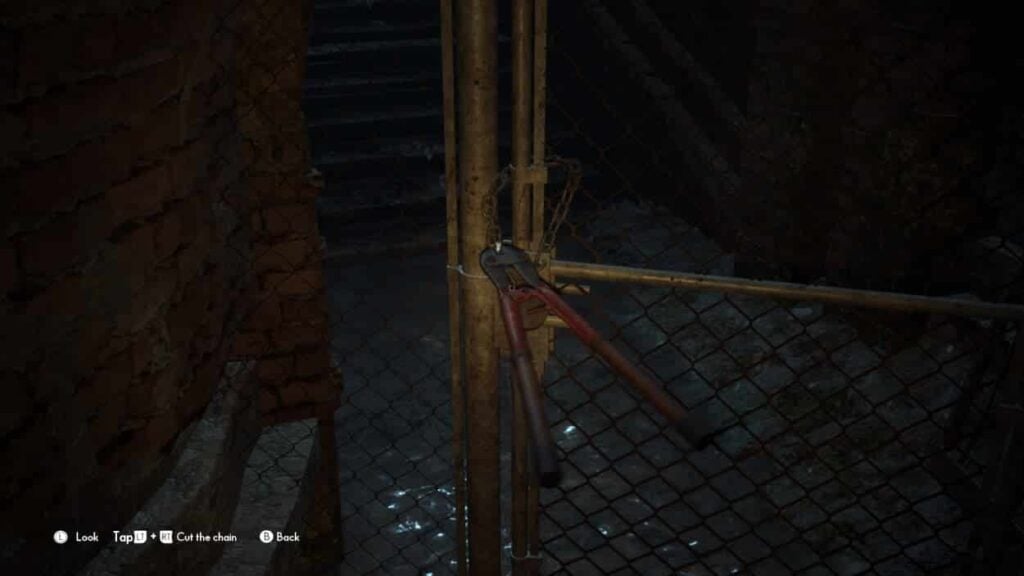 These puzzles (aside from traversing across different realities) are reminiscent of games like Silent Hill or Resident Evil, wherein you must have certain items to progress the story, which lead to more useful items, and so on. In fact, there are sections in which you must use keys, bolt cutters, or — our favorite — a knife to cut through skin barriers (yep, this game is dark), and it zooms in on the item, just like in Resident Evil (see the image above).

It might sound strange, but this is one of the most satisfying parts of the game, thanks to Bloober paying close attention to the past's classic horror titles.

One of the other aspects of The Medium that radiates classic horror is its fixed camera, again, like Resident Evil. This was implemented as a callback to older horror games but also due to the nature of the split-screen sequences. Originally, Bloober utilized a free camera during these segments, but testers reported getting sick. While this is a perfectly reasonable explanation, the fixed camera often got in the way of exploration.

A possible solution could have been to implement the fixed camera during the split-screen sections or give the player the option to toggle between both camera styles. There were times when it wasn't obvious where to go, partly because there was no way to look around freely. It's novel to reference older games that inspired this one, but the fixed camera isn't practical and feels more like a nuisance than anything else. It mostly works fine, but we always felt hindered by the lack of a free camera. 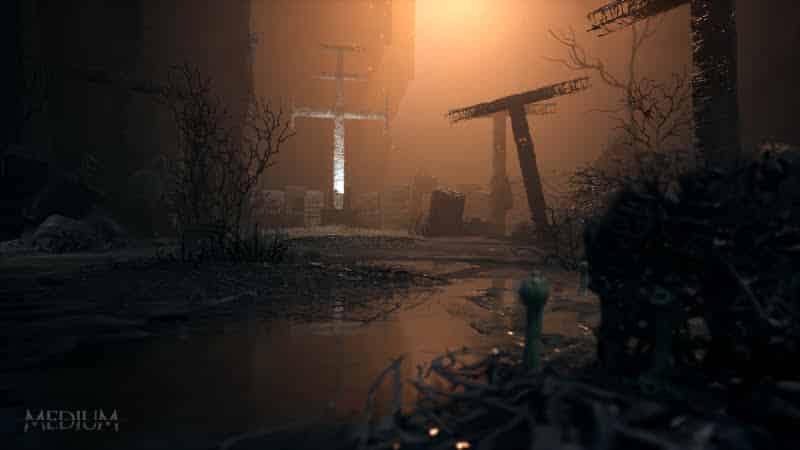 One of The Medium's biggest strengths is its sense of atmosphere. The world-building and environmental storytelling is top-notch and sets the tone for what is one of the creepiest games in recent memory. Simply exploring the game's various locales (especially in the supernatural reality) is downright horrifying, without even featuring scary monsters or anything that's out to get you. There's so much to take in, and it's absolutely a testament to how skilled the art and design teams are at Bloober.

Though, the character models are the weakest portion of the game from an aesthetic point of view. They often looked muddy and stiff, which definitely broke the immersion in many instances. Along with that, the running animation is laughably bad. It's very similar to the way people swing their arms quickly to act like they're running, but they aren't actually going much faster — like when you're in a car, waiting for a person to move across the cross-walk. It's like that.

And on the topic of immersion-breaking sequences, there are a few stealth sections in the game that are downright frustrating. During these spots, you must hide and maneuver around a deadly creature (that looks absolutely terrifying, by the way), but the game sometimes doesn't give you much to work with. For the most part, we cruised through the story with few issues, but the stealth sections just felt underdeveloped and shoehorned in.

The Medium is at its strongest when it lets you explore and solve puzzles. It's so satisfying to search for every nook and cranny, followed by traversing to the other reality to change something that impacts the real world. Again, even the hardest puzzle in the game — one that requires you to move water from various tanks across multiple rooms — wasn't frustrating or annoying, but rather a fair challenge that rewards you for exploring thoroughly. When the light bulb goes off, it's a gratifying feeling that helped balance the weaker sections (like the stealth parts).

Certain areas of the game require you to traverse through deadly moths by utilizing a shield of energy. But to use it, you must gather the energy at a point nearby, which are often hidden behind puzzles of their own. These moth sections certainly helped break up the gameplay, giving you a much more action-oriented way to get through to the next part. 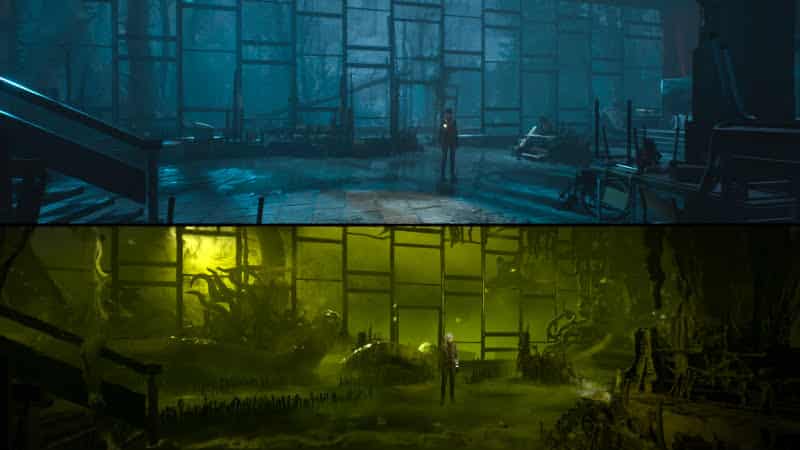 Above all else, The Medium focuses heavily on narrative. The game opens with Marianne having a vision of a child's murder, and her main goal is to figure out what it means. At first, it's assumed to be a dream, but it's later revealed to be much more — which we won't spoil here. Marianne then gets a call from a stranger named Thomas, who you get to play with later on. Thomas' sections play a bit differently, offering more of a linear approach rather than Marianne's slow-paced, deliberate segments.

The narrative is sort of all over the place, with visions of the past and future, making it feel somewhat convoluted. The payoff at the end is interesting and is definitely unexpected, but it felt like there was probably a much simpler way to get to that point. You meet a handful of characters throughout the game, but many are masked, which makes them hard to tell apart. Other characters are only mentioned by name, so again, it was confusing to keep track of them all.

But if you're someone who likes a story that doesn't hand everything to you on a silver platter — one with tons of metaphors and mystery — you'll probably enjoy The Medium's narrative. For us, it felt like it was all over the place and would have been more successful if it were a bit tighter and linear. 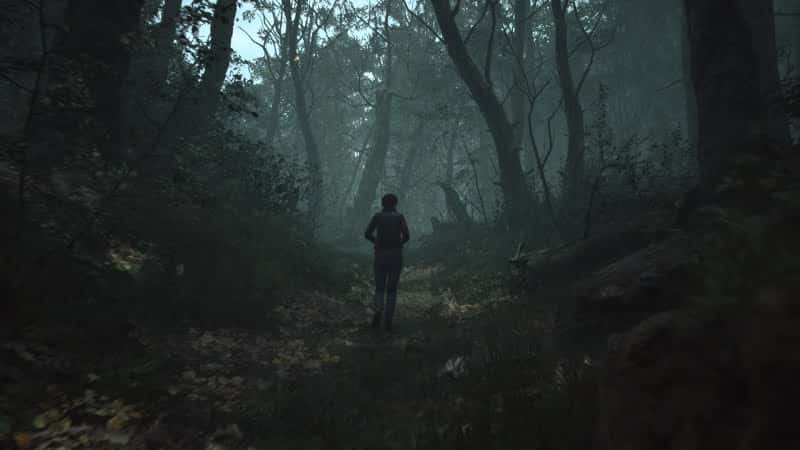 Bolstering the narrative are the performances from the actors. Troy Baker is present as the game's villain, The Maw, and does a wonderful job, as always. The actor who portrays Marianne does a great job of keeping the player immersed, but the star of the show is Baker. You'll know it when you meet his character in-game because his performance is chilling.

We also wanted to give a shoutout to the sound design in The Medium. Please make sure you play with headphones because it will help keep you immersed. The sounds of things like the moths or the evil creature that stalks you are much more powerful when wearing headphones and makes the game much scarier. It doesn't rely on jump scares (though there is one) to keep the tension high. But it does set the tone with its fantastic atmosphere and audio design.

The bigger problem is that its character models (and some other assets) would sometimes look muddy before fully loading, which is noticeable by today's standards. Again, Bloober is a smaller team, but issues like this still need to be pointed out. 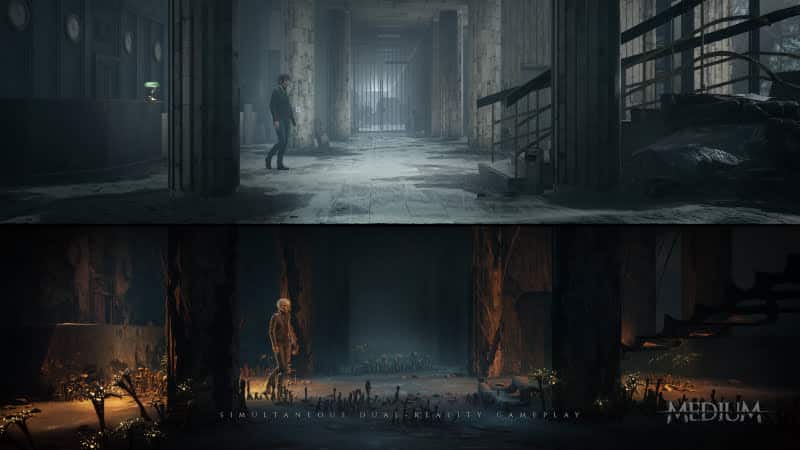 Overall, The Medium doesn't absolutely nail everything it sets out to do, but for the most part, it is an enjoyable experience. The dual-realities are unique and interesting, the exploration and puzzles are satisfying, and the game's general tone is unsettling. Its biggest issues are in its fixed camera and convoluted story, but depending on the types of games you like, those problems might not be as bad for you.

This game won't push the horror genre in a new direction but is worth your time, especially since it'll launch on Xbox Game Pass when it comes out. With a bigger studio and a higher budget, The Medium could have been a system-seller (since it's currently exclusive to Xbox Series X|S), but as it stands, it definitely feels like a middle of the road horror experience, despite the cool nods to the games that inspired it.

Review: Jennifer Brody’s Graphic Novel ‘200’ Is a Fresh Take on the Sci-fi Pursuit of Immorality