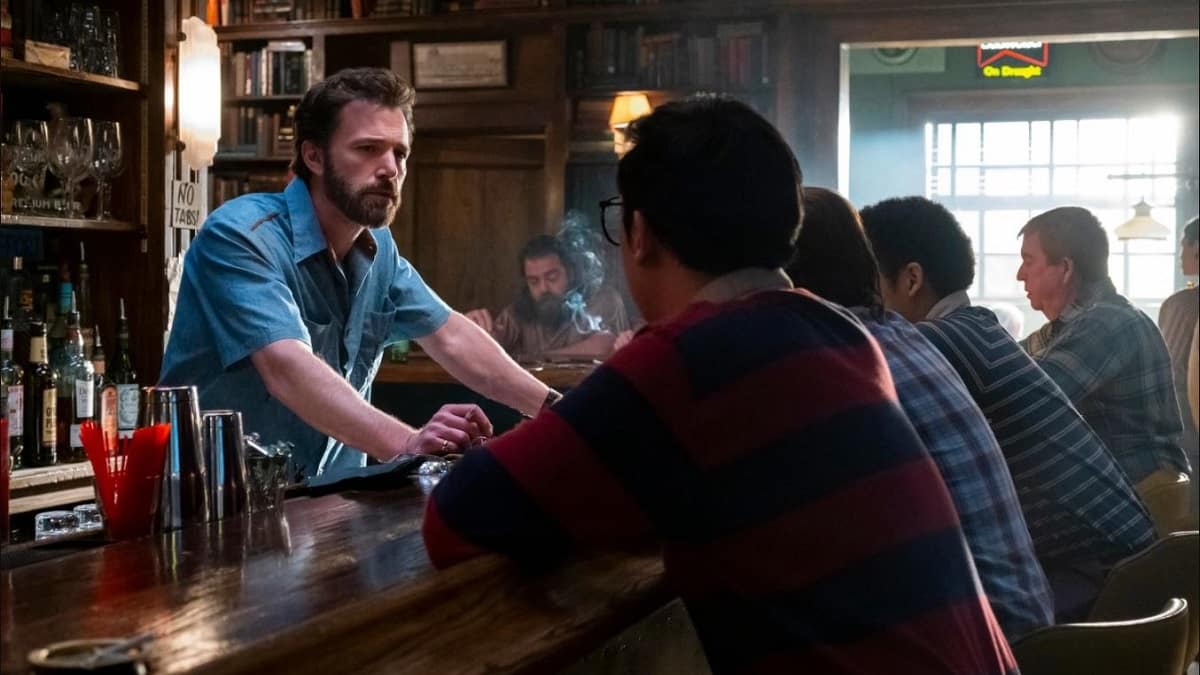 At some point, we should probably start to worry about George Clooney’s career as a director.

After showing promise in Confessions of A Dangerous Mind and Good Night, and Good Luck. his films have vacillated between mediocre (Leatherheads) and the truly terrible (Suburbicon). Thankfully, his latest, The Tender Bar, falls on the mediocre side of the continuum. But only thankful in comparison.

The Tender Bar is the tale of JR (Daniel Ranieri as a kid, Tye Sheridan late teens into adulthood, Ron Livingston in voice-over as some even more adult version). When his mom (Lily Rabe) can no longer afford to live on her own while JR’s absentee dad (Max Martini) continues to stonewall child support, she and JR move back to her childhood home with Grandpa (Christopher Lloyd) and Uncle Charlie (Ben Affleck). Charlie owns a bar (hence the title) with a loose literary theme called Dickens. There, JR learns the rules of being a good man, reads every book in the place, and decides to become a writer.

As he pursues that, he discovers unrequited or irregularly requited love with upper-class Sydney (Briana Middleton), friendship with fellow scholarship kids Jimmy (Ivan Leung) and Wesley (Rhenzy Feliz), alcohol, disappointment, and all that other wonderful stuff about growing into your twenties.

It’s fine enough as a premise and fine enough as a story. But that’s it. It’s just fine enough. At a certain point, fine enough isn’t really enough anymore. That feels especially the case amongst the robust holiday offerings, both high art and popcorn thrilling.

From a directing standpoint, Clooney offers a fairly straight-ahead workmanlike effort. The stylistic flourishes of Confessions, Good Luck., or even the bad in nearly every other way Suburbicon are nowhere to be found. At his best, he gives Bar a warm, cozy feel. In those moments, one can understand why JR found Dickens so magical that he speaks of it now to the audience in a Stand by Me-esque tone. However, when not as his best, the film has a kind of generic competency. Again, fine enough. But not much better.

The Tender Bar has intriguing glimpses into other stories. Viewers may find themselves more interested in Charlie’s drunken intellectual patrons like Chief (Max Casella), JR’s occasional train buddy the Priest (Billy Meleady), or even Sydney’s dismissive mom (Quincy Tyler Bernstine). Instead, we stay with JR’s story and its blandly recognizable energy.

There is one undeniable bright spot that deserves recognition. That’s one Mr. Ben Affleck. Trading Boston for New York—but once again supporting the correct New York team and refusing to go full Yankee—Affleck nicely locates a kind of working-class philosopher energy. He’s the rare mentor figure in movies that seems to grow along with his protégé.

As a result, there’s no moment where he seems fraudulent or empty. His lessons may sometimes veer towards the pat, but he does the most essential things for JR he can. He tells his nephew the truth, warns him about potential pitfalls, and then gets out of the way. It may be the most humane character Affleck has played, one with neither the slickness of his more comedic work nor the heavy pathos of his serious roles.

Alas, Affleck alone can’t save The Tender Bar. As the movie progresses, we see less of Charlie. Everyone else in the movie isn’t bad, by contrast. Still, they don’t feel as honest and tangible as Affleck. As a result, viewers too often will find themselves thinking, “this is fine enough.”

Your Free Credit Score: Top 5 Reasons To Keep Track of It

Terrence Malick Movies Ranked and Where to Stream Them