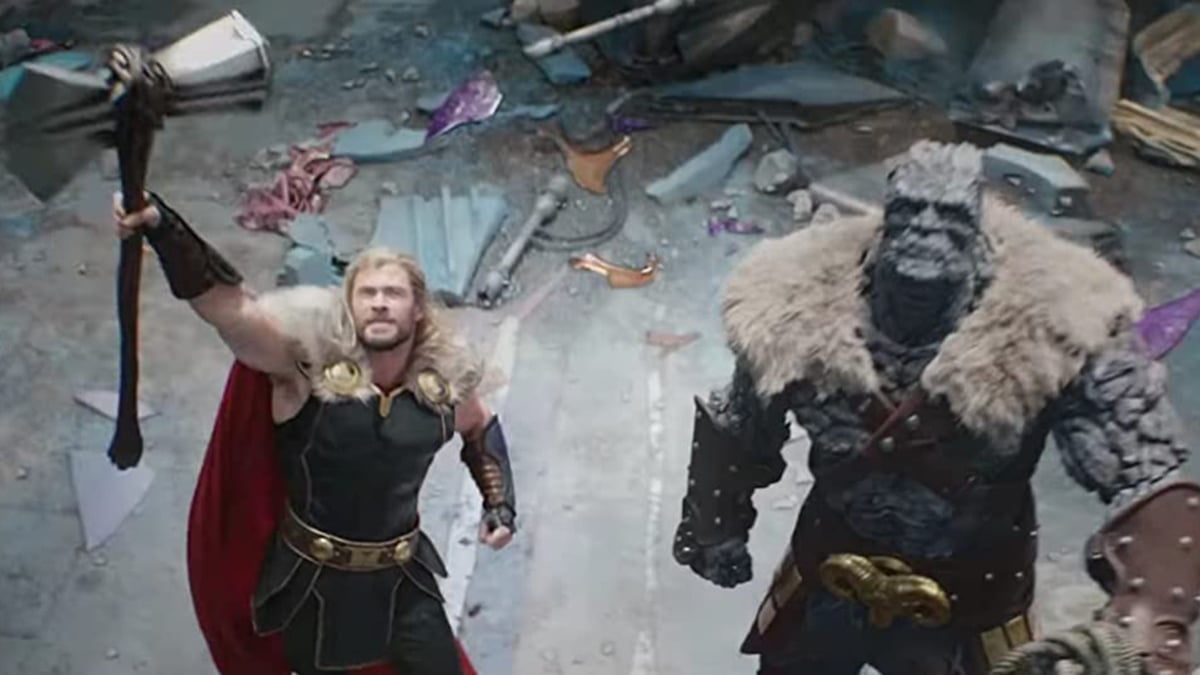 Thor is back in his fourth solo film, with Taika Waititi at the helm again. While Thor: Ragnarok was clearly a Taika film, Love and Thunder takes that to a whole new level. It is clear Marvel handed him the keys and just let him run wild, and it completely pays off.

This movie is bright, vibrant, hilarious, and has a seriously rocking soundtrack, but it also has emotion, heart, and some wickedly dark themes. Gorr the God Butcher, played by the phenomenal Christian Bale, should be absolutely terrifying, as expressed by his name. And have no fear fans, because he is. His arc and evolution throughout the movie plays out in such a brilliant way. Each time we see him, he is more and more poisoned from the dark path he is going down.

While in Marvel comics Gorr has a slightly different look, this one completely works for the story and plot points. You don’t hire an actor like Christian Bale and then cover up his face, which works wonders when expressing emotions and delivering lines. This version of Gorr works and is just as scary as the comic book version, if not even scarier.

Thor: Love and Thunder starts off with Thor traveling with the Guardians of the Galaxy, but considering this is a Thor movie, and the Guardians have their own movie coming, they part ways fairly quickly. Their interactions are lighthearted and fun for the most part, which totally fits into the Guardians world, as well as Waititi’s Thor world. It is obvious that James Gunn had some hand in the writing, as he should because these are his Guardians.

After their paths separate, the focus is all on Thor – and the return of Jane Foster.  While we don’t want to give away any spoilers, there is a storyline taken from the comic books, which was heavily rumored to be a part of this movie. Here is where the emotions come into play.

The Return of Jane

First of all, let’s express how different this version of Natalie Portman’s Jane Foster is from the one we have seen previously. Waititi very clearly wanted to fix the issues from the past, and he succeeds. The chemistry between Chris Hemsworth and Natalie Portman oozes from the screen at times, making their arc completely believable. Sure, she is a bit goofy at times, but it works with the story and will likely make audiences laugh out loud.

Speaking of the humor, this movie is hilarious at times. Yes, it tackles some truly dark and deep themes, so it is nice to have the balance of humor to brighten the mood every now and then. The goats, who are from the comic books as well, provide some much-needed comic relief, however all of the characters have their time to be funny.

Korg gives Luis from the Ant-Man franchise a run for his money when it comes to narrating and storytelling. There are several moments where he takes over to explain the story – and each time is funnier than the last.

Tessa Thompson is wonderful as King Valkyrie. She has now come into her own in ruling New Asgard, although she also is very much missing her time on the battlefield and jumps at the opportunity to take the fight to Gorr.

The battle sequences are breathtaking at times. This movie, for all its silly and fun moments, as well as dark and emotional ones, still finds the time to pack in the action. There is one fight in particular, towards the end of the film, that will have audiences on their feet cheering at how incredible it is.

Thor: Love and Thunder has a handful of truly epic scenes, and it is quite clear that Taika Waititi had an absolute blast being able to express himself through the art that is this movie. For a film to be able to take an audience through a journey like this, filled with both laughter and tears, is no small feat. There are stunning visuals, epic action sequences, and quite possibly the best MCU villain to date.

It shouldn’t need to be said but keep those butts in the seat when the credits start to roll. In true Marvel fashion, there are two end credit scenes, one of which will likely blow fans’ minds.

Thor: Love and Thunder brings in some new characters, like Zeus and Gorr, but focuses on those fan favorites that we already know and love. Thor is able to go through the journey of self-discovery that he needed to. At the end of the movie, it is unclear if he will be back in the MCU, as things are left completely open, but one thing is for sure – fans will be asking for it! Especially if we can get Taika Waititi at the helm.

Thor: Love and Thunder hits theaters July 8th. Follow us here for the latest on movies in theaters now.